There once was something stapled to this note. We do not know what it was, or who Ed was.

The note measures 4'' x 5-1/4''. It appears to be in excellent condition with a staple hole at the top as pictured. below here, for reference, is some information on James C. Cleveland:

Cleveland was born in 1920 to Dr. Mather Cleveland and Susan Colgate Cleveland. He was the second of six children and the eldest son (brother to actress Patience Cleveland). He graduated from Colgate University in 1942, after which he attended Yale Law School for a graduate degree. During his time at Yale, he fought in the Army abroad during World War II, and he finished his degree upon his return. Upon graduation from Yale, Cleveland began practicing law in New London, New Hampshire. He served as a member of the New Hampshire Senate from 1950 to 1962. Cleveland married Hilary Paterson in 1950. They had five children. In 1951, he was called back to fight for the Army in the Korean War.

In 1962, Cleveland ran for his first term in the United States House of Representatives. He won and held the seat continuously until his retirement in 1980. He stated that he only ran because none of the other candidates struck him as good choices for the position; he did not run out of any particular desire to be a member of congress. His actions while in Congress, however, won him the respect of the majority of his constituents in the Second Congressional District of New Hampshire. He made it his duty to fairly and accurately represent his constituents even when it went against his own personal opinion of a given issue. He took many courageous stands in his campaigns, such as opposing unnecessary big dams and wasteful spending. His extreme consideration of those whom he represented was apparent in the efforts he made to understand his constituents; he sent out bi-annual questionnaires of a simple format that helped him and his staff understand which issues mattered most to the people of New Hampshire's Second District.

The appreciation of Cleveland's dedication to his work as a Representative was made formal and public on two different occasions. The first was the renaming of the United States Post Office and Court House building in New Hampshire's capital city, Concord, to the James C. Cleveland Federal Building in 1980. The second occasion on which Cleveland's constituents expressed their appreciation was the construction of the James C. Cleveland Bridge in Berlin, New Hampshire in 1982. 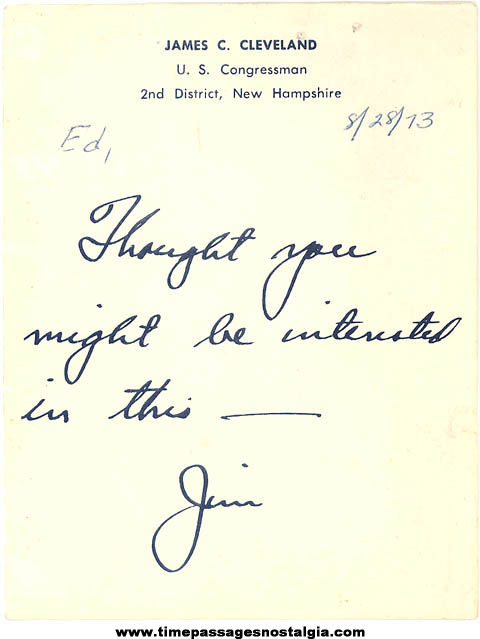