The Franklin Park Zoo is a 72 acre zoo located in Boston, Massachusetts. It is currently operated by Zoo New England, which also operates the Stone Zoo in Stoneham, Massachusetts. The zoo is located in the northeast portion of Franklin Park, Boston's largest park and the last component of the city's famed Emerald Necklace. The zoo was opened to the public in 1912, and managed by the City of Boston until 1958, when the Metropolitan District Commission (MDC) took control. Under the MDC's management, the zoo opened several new exhibits, including Bird's World (c. 1975), the Children's Zoo (1984), and the African Tropical Forest (1989). In 1991, the zoo's management was handed over to the Commonwealth Zoological Corporation (CZS), which also gained management of the Stone Zoo. In July 1997, the CZS was renamed Zoo New England to ''reflect the changing image of both zoos''. The zoo has been accredited by the Association of Zoos and Aquariums (AZA) since 1990. The facility is funded by state money, and has had a history of staff and financial problems, most notably in 2002 and 2009. Luckily, the zoo has never actually closed during these occasions.

History
Frederick Law Olmsted, the original landscape designer of Franklin Park, created plans for a future zoological garden. This plan, however, was to be a naturalistic area for native animals, rather than a traditional zoo. The Franklin Park Zoo officially opened to the public on October 4, 1912 (although most sources say 1913). According to plans by Arthur A. Shurtleff, the new zoo represented a major departure from Olmsted's original plans, and included more exotic animals. However, Shurtleff's design for the zoo was modest and was intended to be in harmony with key elements of the plan, such as a half mile long grassy mall called ''the Greeting'', which began at Peabody Circle. The zoo was managed by the Boston Parks Department, was free to all, and extremely popular. An estimated two million people visited the zoo in 1920.

Unfortunately, the zoo fell into disrepair starting around the time of the Depression and through World War II. In 1958, the Metropolitan District Commission (MDC) took control of the Franklin Park Zoo. The MDC put up fences and gates and started charging admission to the zoo, and areas of the zoo that were difficult to take care of, such as the Bear Dens in Long Crouch Woods, were separated from the zoo property and left to deteriorate. Soon afterward, the zoo received its first professionally trained zoologist to serve as its director, Walter D. Stone. An animal hospital, administrative buildings, and the Children's Zoo (opened in 1962) were also added. In 1970, the Boston Zoological Society assumed some, but not all, management of the zoo, while the state continued to provide funding for the facility.

In 1973, a new $24 million master plan, which would ''recommend replacing 'the Greeting' with new zoo exhibits'', was formulated to revitalize and expand the facility, and included several new domed pavilions, stressing an African theme. Construction began in 1978, but the process was prolonged due to inadequate funding and political complications.

On July 1, 1984 after extensive renovations, the 3 acre Children's Zoo was reopened; around this time it became the zoo's most popular exhibit. After eleven years of construction at a cost of $26 million, the new African Tropical Forest Pavilion opened on September 9, 1989. The zoo was finally accredited by the American Association of Zoological Parks and Aquariums (AAZPA) in 1990. At the time, it was the only zoo in the nation to be run by a state government (besides the Stone Zoo). After accreditation, the zoo's attendance jumped to 200,000. The number of visitors, however, would continue to fluctuate over the next few years.

In 1991, Franklin Park Zoo's management was handed over to the Commonwealth Zoological Corporation (renamed Zoo New England in July 1997). This private, non profit corporation also took over management of the Stone Zoo, which would reopen in June 1992 after being closed for 18 months due to state budget cuts. In the late 1990s, many new exhibits were built, including Bongo Congo (1997), Outback Trail (1998), and Butterfly Landing (1998). Also at this time, the zoo faced many problems, including multiple budget cuts and dwindling attendance. The zoo is now doing well financially and continues to grow, due to the kindness of many supporters.

Exhibits
The zoo contains more than 220 species of animals and includes the following main exhibit areas.

The Tropical Forest (known as the African Tropical Forest from 1989 to 1997), a 3 acre building roofed by a huge Teflon coated cloth dome. The building mimics the animals' natural environment with streams, moats, faux rock structures, hidden fences and barriers, and free flight birds. The exhibit includes gorillas, bats, mandrill, crocodiles, ocelots, ring tailed lemurs, capybara, pottos, Baird's tapirs, vulture, and a pygmy hippopotamus. This exhibit was included in the zoo's 1973 master plan, and was originally intended to house only African tropical species; however, more South American and Asian tropical animals began being displayed in the Tropical Forest by the late 1990s. One gorilla named Little Joe escaped his enclosure several times in 2003. He was later separated from the gorilla family, but later returned in 2007. Also in 2007, the zoo's gorilla exhibit was reopened after extensive renovations. As of 2011, a giant anteater resides in the former warthog enclosure.

Serengeti Crossing (known as Bongo Congo from 1997 to 2003), a 4 acre grassland exhibit with ostriches, Grant's zebras, warthogs, and blue wildebeest. The exhibit first opened in 1997, making it one of the first new exhibits to open at the zoo since the opening of the African Tropical Forest in 1989.

Kalahari Kingdom, a large Africa themed area housing an old male lion named Christopher. Visitors can view this lion through a replica of a land rover ''crashed'' into the exhibit, glass, or from over a moat. The opening of this exhibit in 1997 marked the first time lions had been exhibited at the zoo since the old Lion House was closed in the early 1970s.

Giraffe Savannah, opened in 1999, is a large area containing three Masai giraffe. A herd of rare Grevy's Zebra can be found coexisting with them.

Bird's World, a large building with an Orient themed exterior containing dozens of bird species in four different environments: swamp, rainforest, desert, and wetlands. Outside, there is a large flight cage, a flamingo exhibit, and a waterfowl pond. This building originally opened in 1912 (the same year the zoo itself opened to the public), and was renovated around the mid 1970s to exhibit birds in more naturalistic environments.

Butterfly Landing, a seasonal exhibit containing over 1,000 butterflies in free flight. This large outdoor ''tent'' also has streams and a waterfall surrounded by numerous plant species. The exhibit first opened in 1998.

The Children's Zoo, a three acre complex which includes ducks, prairie dogs, and one rare Amur Leopard, as well as a farmyard exhibit (known as Franklin Farm). A design for this exhibit was published in a 1954 master plan, but the exhibit was not built until 1962, under a much modified design. The Children's Zoo was renovated in the early 1980s and reopened on July 1, 1984 with a grant from the George Robert White Fund. Franklin Farm first opened in June 2000.

Tiger Tales, which contains two rescued tigers named Anala (orange) and Luther (white). The exhibit opened in June 2006, marking the first time tigers had been exhibited at the zoo since the old Lion House closed in the early 1970s. 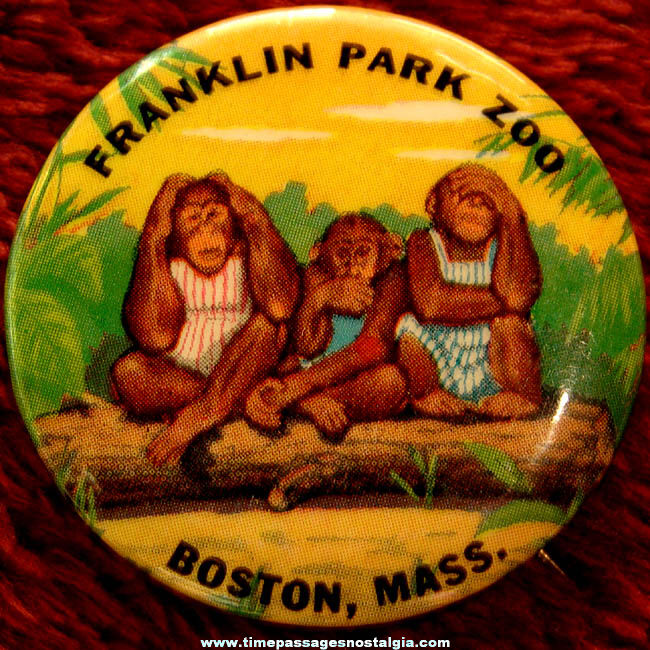