The second item included here is a scarce unused Wheaties cereal box prize. It is a Mohawk Airline Sticker. The front has their Mohawk Native American Indian wing logo or emblem and two fling airplanes. The back is difficult to read in the picture because of light glare, but it lists all (15) airline decals or stickers in this set. For reference, the back of this sticker reads as follows:

Below here, for reference, is a short History of the Mohawk Airlines:

Mohawk Airlines was a regional passenger airline operating in the Mid-Atlantic region of the United States, mainly in New York and Pennsylvania, from the mid 1940s until its acquisition by Allegheny Airlines in 1972. At its height, it employed over 2,200 personnel and pioneered several aspects of regional airline operations, including being the first airline in the United States to hire an African American flight attendant in 1958. The airline was based at Ithaca Municipal Airport near Ithaca, New York until 1958, when it moved to Oneida County Airport in Whitestown, New York.

History
The airline was founded in 1945 as Robinson Airlines by aerial photographer C. S. Robinson as a business of Robinson Aviation, completing its first passenger flight on April 6. The operation was based out of Ithaca Municipal Airport near Ithaca, New York, flying single engine, three passenger Fairchild F-24s. After the end of World War II, the Fairchilds were supplemented with two Cessna T-50s, and in 1946 the entire fleet was replaced with Beechcraft Model 18s.

To keep the airline flying, Robinson secured investments from a variety of local sources, notably Ithaca Enterprises, a nonprofit organization responsible for bringing new businesses to Ithaca; the Cooperative Grange League Federation Exchange (now part of Agway), a farmers cooperative that had been organized by members of The Grange, and Cornell University. Most significant was the involvement of Edwin Albert Link, creator of the Link Trainer. Link lent the airline $75,000 to purchase three used Douglas DC-3s, but also removed control of the company from Robinson, making pilot Robert Peach its general manager. In 1948 the Civil Aeronautics Board certified the airline as a local service carrier, awarding a variety of routes in the Mohawk Valley region. The airline adopted the slogan Route of the Air Chiefs, and painted a blue and red logo of an Indian chief on its tails.

In 1952 Robert Peach purchased a controlling share of the airline, and Robinson removed himself from day-to-day operations. The board adopted the name Mohawk Airlines; in 1953 it carried 2 million passengers between 15 airports and had revenue of $24.3 million. The following summer it experimented briefly with helicopter service, connecting Newark, New Jersey and Grossingers Resort in the Catskill Mountains with a Sikorsky S-55. (The July 1954 OAG shows 13 flights a week each way between Newark and Liberty Airport 41.80°N 74.70°W; fare $18 one way plus tax.) More successfully, the airline introduced Convair 240s on 1 July 1955, becoming the first local service carrier with pressurized aircraft. In 1956, having outgrown its facilities in Ithaca, it moved its corporate offices to Utica.

When hired by Mohawk Airlines in December 1957, Ruth Carol Taylor became the first African American flight attendant in the United States. Six months after breaking one historic barrier, Ruth Taylors career ended due to another barrier: the airlines marriage ban, a common practice among airlines of the day. Airlines often dismissed flight attendants who married or became pregnant.

In May 1968, Mohawk served 38 airports, from Boston and Washington, D.C. to Detroit. From 1968 to 1971, labor and economic issues bled Mohawk financially. Unable to pay creditors at the end of that period, Mohawk began merger discussions with Allegheny Airlines, and merged into Allegheny on 12 April 1972. Allegheny changed its name to USAir in 1979, and later to US Airways. Following bankruptcies and a later merger with America West Airlines in 2005, US Airways purchased American Airlines in 2015 and assumed operations under the American Airlines name and logo. 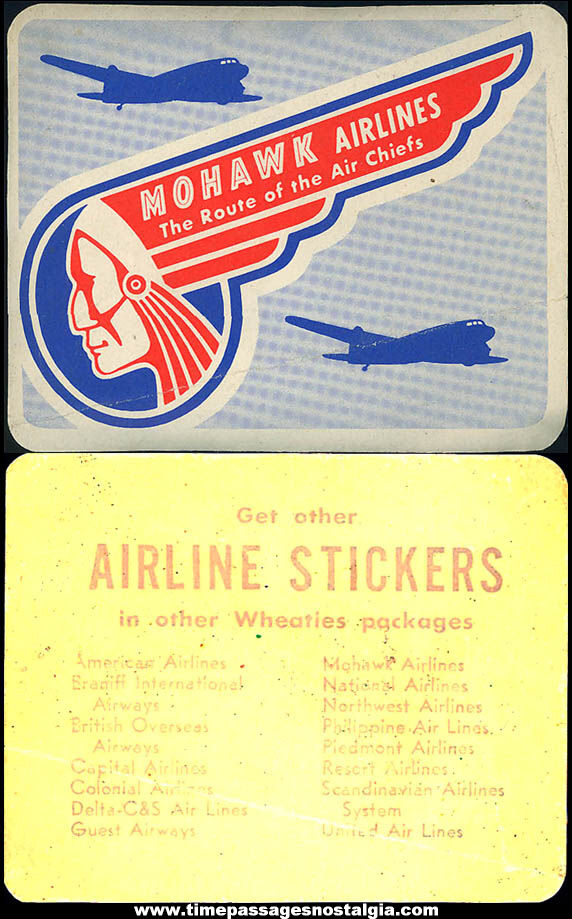