Location of Fort Knox in Kentucky
Fort Knox is a United States Army post in Kentucky south of Louisville and North of Elizabethtown. The 190,000 acre, 170 square mile (441 km.sq) base covers parts of Bullitt, Hardin, and Meade counties. It currently holds the Army Human Resources Center of Excellence to include the Army Human Resources Command, United States Army Cadet Command and the United States Army Accessions Command. It was the home, for nearly seventy years (1940 - 2010), of the U.S. Army Armor Center, the U.S. Army Armor School (now at Fort Benning), and was used by both the U.S. Army and the Marine Corps to train crews on the M1 Abrams main battle tank. The history of the U.S. Army's Cavalry and Armored forces, and of General George S. Patton's career, can be found at the General George Patton Museum on the grounds of Fort Knox. Parts of the base in Hardin and Meade Counties form a census designated place (CDP), which had a population of 12,377 at the 2000 census.

Patton Museum
The museum complex consists of the Patton, WWI, WWII and Post World War Galleries as well as a Special Exhibit area, The Emert L. Davis Memorial Library, outdoor static displays and the Armor Memorial Park. It is adjacent to Keyes Park, which contains a covered picnic facility, restrooms and children's playground. The General George Patton Museum of Leadership (formerly the Patton Museum of Armor and Cavalry) contains the largest collection of Patton artifacts in the world, including personal items used by General George S. Patton throughout his life.

Fortification
Fortifications were constructed near the site in 1861, during the Civil War when Fort Duffield was constructed. Fort Duffield was located on what was known as Muldraugh Hill on a strategic point overlooking the confluence of the Salt and Ohio Rivers and the Louisville and Nashville Turnpike. The area was contested by both Union and Confederate forces. Bands of organized guerrillas frequently raided the area during the war. John Hunt Morgan the 2nd Kentucky Cavalry for the Confederate Army raided the area before staging his famous raid on Indiana and Ohio known as Morgan's Raid.

Post war
After the war, the area now occupied by the Army was home to various small communities. In October 1903, military maneuvers for the Regular Army and the National Guards of several states were held at West Point, Kentucky and the surrounding area. In April 1918, field artillery units from Camp Zachary Taylor arrived at West Point for training. 10,000 acres near the village of Stithton were leased to the government and construction for a permanent training center was started in July 1918.

New camp
The new camp was named after Henry Knox, the Continental Army's chief of artillery during the Revolutionary War and the country's first Secretary of War. The camp was extended by the purchase of a further 40,000 acres in June 1918 and construction properly began in July 1918. The building program was reduced following the end of the war and reduced further following cuts to the army in 1921 after the National Defense Act of 1920. The camp was greatly reduced and became a semi-permanent training center for the 5th Corps Area for Reserve Officer training, the National Guard, and Citizen's Military Training Camps (CMTC). For a short while, from 1925 to 1928, the area was designated as ''Camp Henry Knox National Forest''.

Mechanized military unit occupation
In 1931 a small force of the mechanized cavalry was assigned to Camp Knox to use it as a training site. The camp was turned into a permanent garrison in January 1932 and renamed Fort Knox. The 1st Cavalry Regiment arrived later in the month to become the 1st Cavalry Regiment (Mechanized). In 1936 the 1st was joined by the 13th to become the 7th Cavalry Brigade (Mechanized). The site quickly became the center for mechanization tactics and doctrine. The success of the German mechanized units at the start of World War II was a major impetus to operations at the fort. A new Armored Force was established in July 1940 with its headquarters at Fort Knox with the 7th Cavalry Brigade becoming the 1st Armored Division. The Armored Force School and the Armored Force Replacement Center were also sited at Fort Knox in October 1940, and their successors remained there until 2010, when the Armor School moved to Fort Benning, Georgia. The site was expanded to cope with its new role. By 1943, there were 3,820 buildings on 106,861 acres. 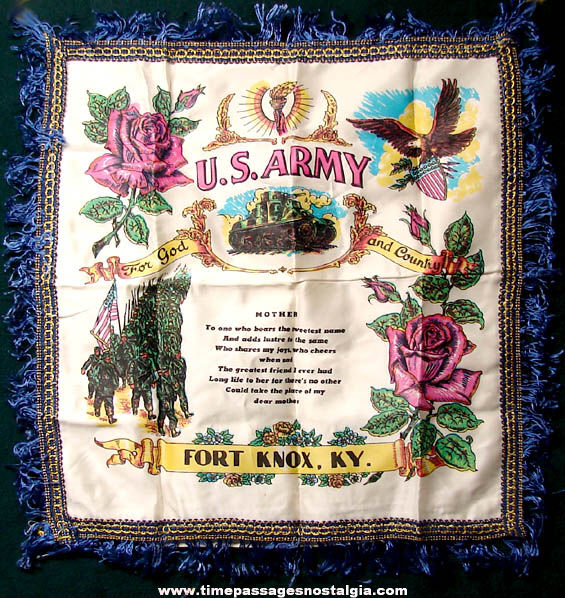