Sea-Monkeys are a cultivated variety, possibly subspecies, of Artemia salina (brine shrimp), sometimes classified as a new species called Artemia nyos. They were bred for their larger size and longer lifespan, making them more suitable as pets than the original breed of brine shrimp. The U.S. Patent 3,673,986  granted in 1972 describes this as ''hatching brine shrimp or similar crustaceans in tap water to give the appearance of instantaneous hatching.'' Adverts for Sea-Monkeys were widespread in comics in the 1970s, featuring drawings of smiling humanoid creatures that bore little resemblance to brine shrimp. The key observation that allowed unhatched "Sea-Monkeys" to be cheaply packaged, shipped, and handled is that, in certain easily prepared environments, they enter cryptobiosis, a natural state of suspended animation. When released into their aquarium they leave this state and hatch.

Life cycle
Basically, one adds the 'water purifier' package on day one. The user is typically unaware that this package already contains eggs in addition to the salt. At day two, one adds the 'instant life eggs' package, containing Epsom salts, borax and soda [disambiguation needed], in addition to eggs, yeast, and a blue dye. The blue dye is used to enhance the 'instant life' experience by making the freshly hatched animals more visible. The Sea-Monkeys seen during the second day after adding the 'eggs package' are derived from the eggs added with the 'purifier' package. The food package is a mixture of Spirulina and dried yeast. The 'boost' packages mainly contain salts, which induce sexual activity in artemia. Sea Monkeys have a biological life cycle of one year, but thanks to their ability to enter cryptobiosis, the product guarantees that the Sea-Monkeys live for up to 2 years. This should be understood as the colony being able to sustain itself for two years.

History
Sea Monkeys were first marketed in 1957 by Harold von Braunhut as Instant Life, though Braunhut changed the name to ''Sea-Monkeys'' on May 10, 1962. Many types of Sea-Monkey kits are now available. The company produces the original Ocean View tank as well as a variety of other products. The Sea-Monkeys company is now part of Educational Insights, and as of 2005 it is headed by George C. Atamian and son-in-law David Horvitz. As of 2005, there are even ''Sea-Monkeys'' themed slot machines. Other companies have distributed toys along the ''Sea-Monkey'' model including Wham-o and Dr. Jordan's Formulas 'THE SWARM' product.

Brine shrimp are species of aquatic crustaceans of the genus Artemia, the only genus in the family Artemiidae (not closely related to true shrimp). Brine Shrimp have existed since the Triassic period of the Earth's existence, and have a evolved little since. They are found worldwide in saltwater, though not in oceans. Artemia is a well known genus as one variety, sometimes identified as a new species, Artemia nyos, or otherwise as simply a cultivated subspecies of Artemia salina, is sold as novelty gifts, most commonly under the marketing name Sea-Monkeys. Artemia were first discovered in Lymington, England in 1755. There are mixed views on whether all brine shrimp are part of one species or whether the varieties that have been identified are properly classified as separate species.

Brine shrimp eggs are metabolically inactive and can remain in total stasis for several years while in dry oxygen-free conditions, even at temperatures below freezing. This characteristic is called cryptobiosis meaning ''hidden life'' (also called diapause). Once placed in water, the cyst like eggs hatch within a few hours, and will grow to a mature length of around one cm on average. Brine shrimp have a biological life cycle of one year. This short life span, and other characteristics such as their ability to remain dormant for long periods, have made them invaluable in scientific research, including space experiments. Brine shrimp can tolerate varying levels of salinity, and a common biology experiment in school is to investigate the effect of salinity levels on the growth of these creatures. They have a rudimentary nervous spinal system, which leads researchers to believe that they may be used in experiments without concern for animal ethics.

The nutritional properties of newly hatched brine shrimp make them particularly suitable to be sold as aquarium food as they are high in lipids and unsaturated fatty acids (but low in calcium). These nutritional benefits are likely to be one reason that brine shrimp are found only in highly salinated waters,with reasonable temperatures, as these areas are uninhabitable for potential predators. The nauplii, or larvae, of brine shrimp are less than 500 micrometers when they first hatch. They eat micro algae, but will also eat yeast, wheat flour, soybean powder, or egg yolk.

Artemia monica, the variety commonly known as Mono Lake brine shrimp, are found only in Mono Lake, Mono County, California. In 1987, Dr. Dennis D. Murphy from Stanford University petitioned the United States Fish and Wildlife Service to add Artemia monica to the endangered species list under the Endangered Species Act 1973. Despite there being trillions of these creatures in Mono Lake, it was felt that rising levels of salinity and sodium hydroxide concentration of the lake would endanger them because of the increase in pH. However, the US Fish and Wildlife Service reported in the Federal Register on 7 September 1995 that this brine shrimp did not warrant listing after the threat to the lake was removed following a revised policy by the California State Water Resources Control Board. 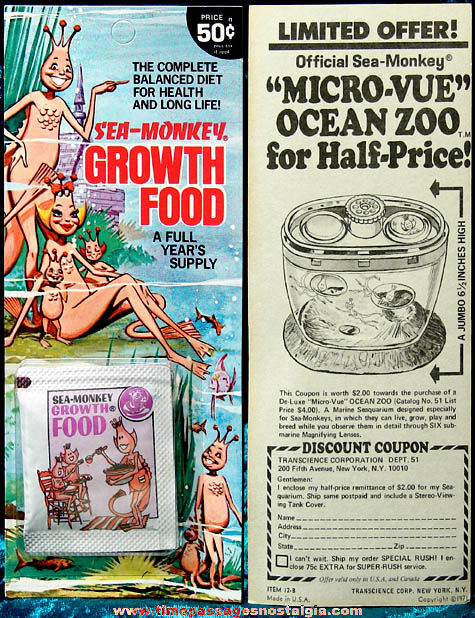