The pinback button measures 7/8'' wide. It appears to be in excellent condition as pictured. Below here, for reference, is some historical information about this U.S.S. Charleston Cruiser:

The second U.S.S. Charleston (C-2) was a United States Navy protected cruiser, the first U.S. protected cruiser to be built. Lacking experience in building steel cruisers, the design was commissioned from the British company W. Armstrong, Mitchell and Co. of Newcastle, the construction to be by an American shipyard. She was launched on 19 July 1888 by Union Iron Works, San Francisco, California, sponsored by Mrs. A. S. Smith, and commissioned on 26 December 1889, Captain George C. Remey in command.

Charleston cleared Mare Island Navy Yard on 10 April 1890 to join the Pacific Squadron as flagship, cruising in the eastern Pacific. She carried the remains of King David Kalakaua of Hawaii to Honolulu after his death in San Francisco, and between 8 May and 4 June 1891, took part in the search for the Chilean steamer Itata which had fled San Diego in violation of the American neutrality laws, enforced strictly during the Chilean Civil War. Between 19 August and 31 December 1891, Charleston cruised in the Far East as flagship of the Asiatic Squadron, rejoining the Pacific Squadron in 1892 until 7 October, when she departed for the east coast, calling at a number of South American ports en route.

Charleston arrived in Hampton Roads on 23 February 1893. From here she sailed with other American and foreign ships to the International Naval Review conducted at New York City on 26 April 1893 as part of the Columbian Exposition. Taking the review was President Grover Cleveland in despatch vessel Dolphin. In the summer of 1893, Charleston turned south to join the strong force patrolling the east coast of South America to protect American interests and shipping from disturbance during the Brazilian Revolution. After a leisurely cruise from Montevideo, Uruguay, she arrived in San Francisco on 8 July 1894 to prepare for a return to the Asiatic Station. She cruised in the Far East until 6 June 1896, when she steamed from Yokohama for San Francisco where she was placed out of commission on 27 July 1896.

Upon the outbreak of the Spanish-American War, Charleston was quickly made ready for service, and was recommissioned on 5 May 1898, Captain Henry Glass, Commanding. Sixteen days later, she sailed for Honolulu, where she was joined by three chartered steamers transporting troops, including City of Peking. Charleston was sent to raise the American flag over Guam, then a Spanish possession. At daybreak on 20 June, the little convoy arrived off the north end of Guam. Charleston investigated the harbor at Agana, then proceeded to Apra Harbor. Leaving the transports safely anchored outside, Charleston sailed boldly into the harbor, firing a challenge at Fort Santa Cruz. Almost at once, a boatload of Spanish authorities came out to apologize for having no gunpowder with which to return the supposed salute. They were astounded to learn that a state of war existed, and that the American ships had come to take the island. The next day the surrender was received by a landing party sent ashore from Charleston. With the Spanish governor and the island's garrison of 69 as prisoners in one of the transports, Charleston then sailed to join Admiral George Dewey's fleet in Manila Bay.

She arrived Manila on 30 June 1898 to reinforce the victors of the previous month's great naval battle in their close blockade of the Bay. Charleston joined in the final bombardment of 13 August, which brought about the surrender of the city of Manila. She remained in the Philippines through 1898 and 1899, bombarding insurgent positions to aid Army forces advancing ashore, and taking part in the naval expedition which captured Subic Bay in September 1899.

Charleston grounded on an uncharted reef near Camiguin Island north of Luzon on 2 November 1899. Wrecked beyond salvage, she was abandoned by all her crew, who made camp on a nearby island, later moving on to Camiguin while the ship's sailing launch was sent for help. On 12 November, gunboat HelenaÊ(PG-9) arrived to rescue the shipwrecked men. 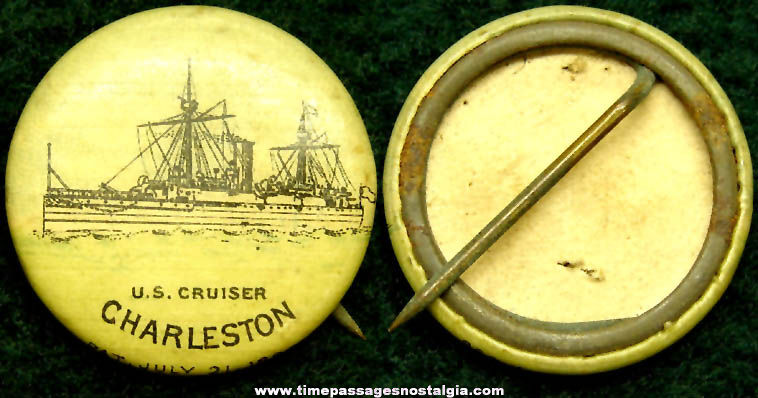