Live After Death is a live album by the British heavy metal band Iron Maiden, released on October 14, 1985. It was recorded during their World Slavery Tour. The album is often regarded as one of the greatest live albums ever recorded. The first 13 tracks (12 songs and the intro) were recorded at the Long Beach Arena in Long Beach, California on March 14 - 17, 1985. The last 5 songs were recorded earlier on the same tour, at the Hammersmith Odeon (now known as the Hammersmith Apollo) in London on October 8, 9, 10, and 12, 1984. On the original double LP version, the songs from Long Beach are on the first three sides, whereas the songs recorded in London (''Wrathchild'', ''Children of the Damned'', ''22 Acacia Avenue'', ''Die With Your Boots On'', and ''Phantom of the Opera'') were on side four.

The initial CD version (released in December, 1985) of this album includes everything that the first three sides of the LP version contain. The fourth side was not included on the original release, due to capacity problems. Also, ''Running Free'' is shortened from about 8:43 on vinyl to about 3:16 on the CD by eliminating the crowd interaction. The 1998 remastered re-release has the unedited version, and includes a second CD with the tracks that were previously missing. It should be noted that the 1995 re-release also has an extra CD, but that had the b-sides from the singles on it. Also, this re-release was not remastered.

The Live After Death video is also recorded at the Long Beach Arena, but on a different night. It contains a full gig, complete with intro and encore, and closes with ''Sanctuary'', which was not on the LP or original CD release of the album. Two singles were released from Live After Death: ''Running Free'' and ''Run to the Hills''.

Cover Art
The cover art was as usual at this time done by Derek Riggs, and pictures the band's mascot, Eddie rising from a grave. On that grave is a tombstone with a quote from the fantasy and horror fiction author H. P. Lovecraft's The Nameless City:
''That is not dead which can eternal lie
Yet with strange aeons even death may die.''

The proper quote is actually ''And with strange...'' instead of ''Yet with strange...''.
The cover depicts Eddie as he is seen on covers before Piece of Mind (with long hair) though he is also bound by metal cuffs connected by an electrical surge, as seen in Powerslave merchandise, and also the metal headgear from his Piece of Mind lobotomy. The back cover also shows Death in the clouds above the destroyed city. This is the third cover where its figure can be seen (the first being Twilight Zone and the second being The Trooper, though it is also played by Eddie on Dance of Death and Death on the Road). In 2007 The National Entertainment Collectibles Association released an action figure diorama of the album cover. It is the third in the series. Other available figures are based on Somewhere in Time, Phantom of the Opera and Piece of Mind.

Track listing
All songs written by Steve Harris, except where noted. 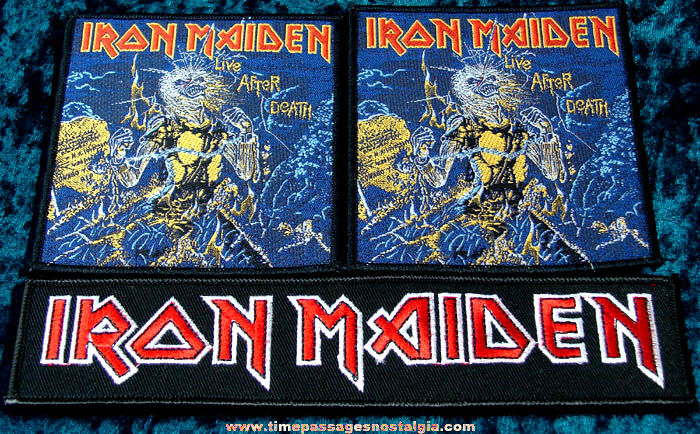