The doll measures about 13-3/4'' tall. It appears to be in excellent used condition as pictured. Below here, for reference, is some additional information:

The Quick Draw McGraw Show
From Wikipedia, the free encyclopedia

Quick Draw was usually depicted as a sheriff in these short films set in the American Old West. Each episode was approximately six minutes long; this allowed four episodes per half hour program interspersed with commercial advertisements. Quick Draw was often accompanied by his deputy, a Mexican burro called Baba Looey (the name being a word play on Desi Arnaz's hit song called ''Babalu''), who spoke English with a Mexican accent and was also voiced by Butler. In the Spanish American version, Quick Draw (Tiro Loco McGraw) speaks in a very English influenced accent, and Baba Looey (Pepe Trueno, or Pepe Luis in some episodes) speaks in a very Mexican accent, so it was clear that Quick Draw was the alien, and there was no need to adapt any feature of the story. In the Brazilian version however, Quick Draw speaks in a drawling Portuguese which along with his hispanized name (Pepe Legal) would suggest he was either a Texan American or Mexican cowboy. Baba Looey (Babalu) retains his heavy Mexican accent as elsewhere.

Quick Draw satirized the westerns that were popular among the American public at the time. His character was well intentioned, but somewhat dim. Often, Baba Looey was a more astute judge of the problem at hand than Quick Draw. Baba Looey would start to tell Quick Draw what he was thinking: ''Queeks Draw, I theen...'', whereupon Quick Draw would interrupt with his catchphrase: ''Now hoooooold on thar, Baba Looey! I'll do the 'thinnin' around here, and doooon't you forget e-it!'' Quick Draw spoke with a heavy drawl, as shown by his catchphrase. 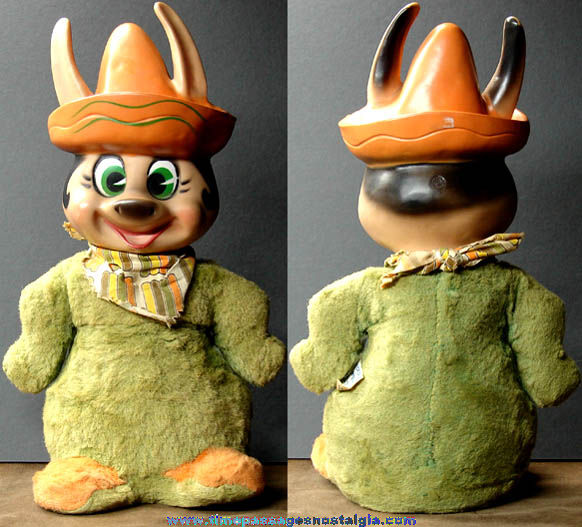