Solid Gold was an American syndicated music countdown television series which aired from 1980 to 1988, usually on Saturday in the early evening time slot. During its 7th season (1986 to 1987), it was renamed Solid Gold '86 / '87, and in its 8th season (1987 to 1988) it was retitled Solid Gold in Concert. The main premise of Solid Gold consisted of the ''Solid Gold Dancers'' doing elaborate (and sometimes borderline risqu) dances to the top ten hits of the week. Many other specials aired in which the dancers would dance to older pop hits as well.

From 1980 to 1984 the show was taped on the KTLA Lot. In the fall of 1984, the shows taping was moved to the Paramount Studios in Hollywood as Paramount Studios wanted to bring their show ''in house''. This move is most evidenced by the re-design of the set. Solid Gold was produced by Brad Lachman and Bob Banner in association with Operation Prime Time (Alfred M. Masini, in charge of OPT) and Paramount Television (Richard H. Frank, in charge of Paramount).

At the start of Solid Gold's first season (1980), Michael Miller was chosen by Dionne Warwick to be the show's Musical Director, a role he continued on with for the entire run of the series. Michael also composed the Solid Gold theme song, along with Academy Award winning lyricist, Dean Pitchford, who wrote the theme's words.

The first episode of the show in January 1980 would become a yearly tradition, as they counted down the Top 50 of 1979 in a two hour television pilot special, called Solid Gold '79, hosted by Dionne Warwick and Glen Campbell. Solid Gold would return in the fall of 1980, as a weekly series. Of the 8 original Solid Gold '79 dancers only 5 would join the Solid Gold series cast (Darcel Wynne, Deborah Jennsen, Paula Beyers & Alexander Cole). Gayle Crofoot would join the cast in late fall of 1982 replacing dancer Lucinda Dickey. Every year thereafter through 1986, they would host a two hour year end Top 40 countdown show.

All chart information for the Solid Gold countdown was taken from the Radio & Records magazine chart lists, which only tracked airplay (at the time Billboard did not have an airplay chart), and as such, the placement of singles on Solid Gold usually did not match Billboard. For example, ''Her Town Too,'' a 1981 hit by James Taylor and J. D. Souther, lasted six weeks on the Solid Gold countdown, while it didn't even make the Top Ten on the main Billboard chart.

The premiere and much of the first season was hosted by Dionne Warwick and Marty Cohen, known more commonly as ''Partyin' Marty Hardy''. In the fall of the 1981 - 1982 season, Marilyn McCoo of The 5th Dimension and Andy Gibb took over hosting duties. In the 1982 - 1983 season Rex Smith replaced Andy Gibb as Marilyn McCoo's co-host and in the 1983 - 1984 season Marilyn McCoo hosted alone. In September 1984, Rick Dees hosted the show with comedy bits added to the format. When Dees left in the middle of the season, the rest of the season was co-hosted by two different music stars each episode. Dionne Warwick returned to the show as host in the 1985 - 1986 season before Marilyn McCoo would return as host in the 1986 - 1987 season along with Arsenio Hall and Nina Blackwood as co-hosts which would last until the end of the series in 1988.

The weekly one-hour show played segments from the Top 10 charting songs accompanied by the Solid Gold Dancers. Darcel Wynne was the principal dancer on Solid Gold during her five year reign. She appeared on the show from 1980 to 1984, took most of the 1984 - 1985 season off and rejoined the cast for 1985 - 1986. In 1986, Darcel had many speaking roles on Solid Gold, regularly announcing the countdown re-caps towards the end of the show. Wynne and most of the other dancers left the program at the end of that season. The last appearance of the Solid Gold Dancers in media was not on Solid Gold itself, but rather in the 1988 motion picture Scrooged. The movie, which premiered in November 1988, was scripted and filmed before Solid Gold was officially cancelled.

Guest performers and the usage of the Top 10

At times, artists who had a single among the week's Top 10 appeared as guest performers. Sometimes the vocals were lip synched; sometimes they were performed live. For the live performances, Musical Director Michael Miller would either record the backing instrumental tracks with his Solid Gold Band or with the artist's band, and then the singers would sing live on stage at the taping. Celebrities also occasionally served duty as guest hosts, and all the duets that Dionne, Marilyn, Andy, or Rex ever performed with their guest hosts were done live. During the 1986 - 1987 season, the Top 10 was no longer accompanied with dancing from the Solid Gold Dancers and instead was just simply listed halfway through the show.

In the summer of 1984, a weekday half hour format called Solid Gold Hits went into syndication; it was hosted by Grant Goodeve and showcased just a general grouping of the hits of the time. The main Solid Gold program was still airing on weekends. The Solid Gold Hits Dancers were: Deborah Jennsen, Raymond Del Barrio, Cooley Jackson, Tricia McFarlin, Macarena Garandillas and Debra Johnson. Deborah Jennsen, although never credited was the lead dancer. She and Cooley both worked on the regular series also. Pam Rossi also was on the show a few episodes.

A September 2007 episode of the sketch comedy show Saturday Night Live featured a satirical promotion for a supposed ''Best of Solid Gold'' DVD, with the announcer stating, ''enjoy as the Solid Gold dancers sexy shake it to some of the most undanceable songs ever written,'' before showing the dancers dancing to ''We Built This City''.

The animated internet talk show This Spartan Life features the ''Solid Gold Elite Dancers'' as the show's equivalent to a talent segment.

The music video for Sum 41's ''We're All to Blame'' parodies Solid Gold and features the Solid Gold Dancers via CGI.

In an episode of The Golden Girls (Season 2 Episode 18 Aired: 2/14/1987) character Dorothy Zbornak (Bea Arthur) finds out her new boyfriend is a priest. When he tells her she looks lovely in her low cut, sequined blouse, she quips, ''I look like the mother of a Solid Gold dancer!''

In an episode of Growing Pains titled ''Springsteen'' (Season 1 Episode 2, 1985), Mike Seavers (Kirk Cameron) asks to her mother: ''Try... Give me only one good reason to go on living?'', she (Joanna Kerns) answers: ''The Solid Gold dancers'' and he smiles.

In a 3rd season episode of 30 Rock titled ''The Ones'' Liz Lemon (Tina Fey) mentions that her prom night ended with ''Eating ice cream and watching Solid Gold in my Basement.''

In episode AABF20 of The Simpsons (Thirty Minutes Over Tokyo, original airdate May 16, 1999), when Chuck Garabedia asks the audience, ''Are you tired of missing out on the good things in life - family vacations, jet packs, Solid Gold dancers?'', Homer leans in to Marge and says, ''There's only three left in the world, you know.'' 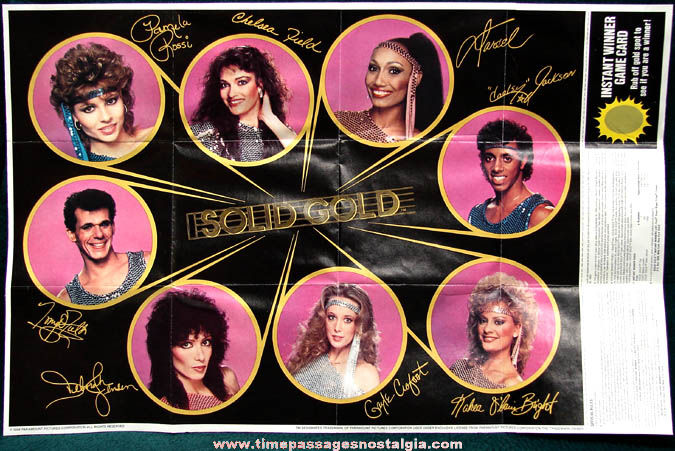