The opened brochure measures 13'' x 3-3/4''. It is in excellent condition as pictured. Below here is some Historical reference information that was found on The Edgewater Beach Hotel:

It was a Chicago landmark, a lavish pink resort that stood on the lakefront at Sheridan near Foster for almost half a century. The Edgewater Beach Hotel has been closed since 1967, yet the memories linger on.

The Edgewater Beach Hotel was the brainchild of two Chicago businessmen, who initially tried to buy the Chicago Cubs. When the deal fell through, they decided instead to build a hotel. One of the partners, John T. Connery, bought the vacant property across the street from his home on Sheridan Road and called on the architectural firm Marshall & Fox whose lead architect, Ben Marshall, had a reputation for flamboyant taste and adventurous style. Marshall's concept for the Edgewater Beach was no exception: the construction would be in Spanish style stucco, in the form of a Maltese Cross, so most rooms would face the Lake. The original 400 room structure opened in 1916.

''When the hotel first opened,'' Connery's granddaughter Mary Nelson remembers, ''my grandfather was going from empty room to empty room in the evening turning on the lights on the Sheridan Road side to make the hotel look occupied. That was not necessary for very long, as the hotel soon became very popular.'' So popular, in fact, that a second 600-room unit was opened just to the south in 1922.

During the 1920s, 1930s, and 1940s, the Edgewater Beach was Chicago's place to see and be seen. Countless weddings, proms, dances and other events drew neighborhood residents. On any given night, you could rub elbows with celebrities such as Bette Davis, Tallulah Bankhead, Nat King Cole, Perry Como, Marilyn Monroe, and major sports figures including Babe Ruth and Lou Gehrig, to name a few. All the big bands played there: Tommy Dorsey, Xavier Cugat, Wayne King and many others. Hotel manager (and later president) William Dewey ''was a showman,'' says historian Kenan Heise. ''He was good at booking top names into the Edgewater Beach, and that was very much a part of its allure.''

Guests still recall the Beach Walk, the Marine Dining Room and its strictly formal dress code, the radio shows and television broadcasts. Singer Gloria Van, who performed with Wayne King's band, remembers: ''I knew I had reached my goal when I worked the Edgewater. I felt like a big deal when I worked it. It was just gorgeous.'' The hotel was almost a city within itself. It had its own radio station, print shop, chocolate factory and even a heliport. Newsreels show that it had a state-of-the-art film studio as well. There was even a distinctive green motor coach that shuttled guests each day to and from Marshall Field's downtown. And the hotel had a seaplane available for the illustrious and well-heeled who didn't want to take the bus!

But by the 1950s, the Edgewater Beach, like many traditional establishments, found itself at odds with the times. The city's decision to extend Lake Shore Drive past the hotel north to Hollywood cut the Edgewater Beach off from its prized lakefront. Management, maintenance and financial problems mounted, and the original owners sold their interest in the late 1940s. Symbolically, the elegant Marine Dining Room was replaced by the Polynesian Room. (Employees who were trained in serving fine cuisine disdainfully referred to the new restaurant as ''that chop suey joint.'') With the advent of television and air conditioning, the hotel drew fewer and fewer guests, and in December 1967, the owners abruptly shut it down. Demolition took over a year. ''It was a big part of the neighborhood,'' recalls resident Phyllis Nickels, ''so we were awfully mad when they were going to take it down.''

A trace of elegance still remains at the Edgewater Beach Apartments, built in 1927, the last of the original structures left on the property. And as you walk by, you can almost hear the big bands playing, just as they did in the glory days of the Edgewater Beach. The hotel may be gone but the magic definitely still lingers.

Making Magic by the Lake
By writer/producer Ginny Weissman 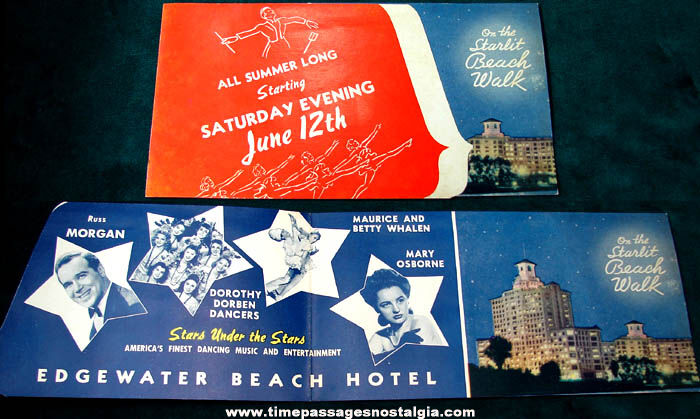