Shirley Temple Black (April 23, 1928 - February 10, 2014) was an American actress, singer, dancer, businesswoman, and diplomat who was Hollywood's number one box office draw as a child actress from 1935 to 1938. As an adult, she was named United States ambassador to Ghana and to Czechoslovakia, and also served as Chief of Protocol of the United States.

Shirley Temple began her film career at the age of three in 1932. Two years later, she achieved international fame in Bright Eyes, a feature film designed specifically for her talents. She received a special Juvenile Academy Award in February 1935 for her outstanding contribution as a juvenile performer in motion pictures during 1934. Film hits such as Curly Top and Heidi followed year after year during the mid to late 1930s. Temple capitalized on licensed merchandise that featured her wholesome image; the merchandise included dolls, dishes, clothing, and more. Her box office popularity waned as she reached adolescence. She appeared in a few films of varying quality in her mid to late teens, and retired from films in 1950 at the age of 22.

In 1958, Temple returned to show business with a two season television anthology series of fairy tale adaptations. She made guest appearances on television shows in the early 1960s and filmed a sitcom pilot that was never released. She sat on the boards of corporations and organizations including The Walt Disney Company, Del Monte Foods, and the National Wildlife Federation. She began her diplomatic career in 1969, when she was appointed to represent the United States at a session of the United Nations General Assembly, where she worked at the U.S Mission under Ambassador Charles W. Yost. In 1988, she published her autobiography, Child Star. Temple was the recipient of numerous awards and honors, including the Kennedy Center Honors and a Screen Actors Guild Life Achievement Award. She is 18th on the American Film Institute's list of the greatest female American screen legends of Classic Hollywood cinema.

Shirley Temple was born on April 23, 1928, in Santa Monica, California, the third child of homemaker Gertrude Amelia Temple and bank employee George Francis Temple. The family was of Dutch, English, and German ancestry. She had two brothers: John Stanley, and George Francis, Jr. The family moved to Brentwood, Los Angeles. Her mother encouraged her singing, dancing, and acting talents, and in September 1931 enrolled her in Meglin's Dance School in Los Angeles. At about this time, Shirleys mother began styling her daughters hair in ringlets. While at the dance school, she was spotted by Charles Lamont, who was a casting director for Educational Pictures. Temple hid behind the piano while she was in the studio. Lamont took a liking to Temple, and invited her to audition; he signed her to a contract in 1932. Educational Pictures was going to launch its Baby Burlesks, multiple short films satirizing recent film and political events by using preschool children in every role. Baby Burlesks is a series of one reelers, and another series of two reelers called Frolics of Youth followed with Temple playing Mary Lou Rogers, a youngster in a contemporary suburban family. To underwrite production costs at Educational Pictures, she and her child co-stars modeled for breakfast cereals and other products.[19][20] She was lent to Tower Productions for a small role in her first feature film (The Red Haired Alibi) in 1932 and, in 1933, to Universal, Paramount, and Warner Bros. Pictures for various parts. After Educational Pictures declared bankruptcy in 1933, her father managed to purchase her contract for just $25.

Film career
Fox Film songwriter Jay Gorney was walking out of the viewing of Temple's last Frolics of Youth picture when he saw her dancing in the movie theater lobby. Recognizing her from the screen, he arranged for her to have a screen test for the movie Stand Up and Cheer! Temple arrived for the audition on December 7, 1933; she won the part and was signed to a $150 per week contract that was guaranteed for two weeks by Fox Film Corporation. The role was a breakthrough performance for Temple. Her charm was evident to Fox executives, and she was ushered into corporate offices almost immediately after finishing Baby Take a Bow, a song and dance number she did with James Dunn. On December 21, 1933, her contract was extended to a year at the same $150 week with a seven year option and her mother Gertrude was hired on at $25 week as her hairdresser and personal coach. Released in May 1934, Stand Up and Cheer! became Shirleys breakthrough film. Within months, she became the symbol of wholesome family entertainment. In June, her success continued when she was loaned out to Paramount for Little Miss Marker.

After the success of her first three movies, Shirleys parents realized that their daughter was not being paid enough money. Her image also began to appear on numerous commercial products without her legal authorization and without compensation. To get control over the corporate unlicensed use of her image and to negotiate with Fox, Temples parents hired lawyer Loyd Wright to represent them. On July 18, 1934, the contractual salary was raised to $1,000 a week and her mother's salary was raised to $250 a week, with an additional $15,000 bonus for each movie finished. Temples original contract for $150 per week is equivalent to $2,750 in 2015, adjusted for inflation. However, the economic value of $150 during the Great Depression was equal to $18,500. The subsequent salary increase to $1,000 weekly had the economic value of $123,000 and the bonus of $15,000 per movie (equal to $275,000 in 2015) was equivalent to $1.85 million in a decade when a quarter could buy a meal. Cease and desist letters were sent out to many companies and the process was begun for awarding corporate licenses.

On December 28, 1934, Bright Eyes was released. The movie was the first feature film crafted specifically for Temples talents and the first where her name appeared eponymously over the title. Her signature song, On the Good Ship Lollipop, was introduced in the film and sold 500,000 sheet music copies. In February 1935, Temple became the first child star to be honored with a miniature Juvenile Oscar for her film accomplishments, and she added her footprints and handprints to the forecourt at Grauman's Chinese Theatre a month later.

In 1935, Fox Films merged with Twentieth Century Pictures to become 20th Century Fox. Producer and studio head Darryl F. Zanuck focused his attention and resources upon cultivating Shirleys superstar status. She was said to be the studios greatest asset. Nineteen writers, known as the Shirley Temple Story Development team, made 11 original stories and some adaptations of the classics for her. In keeping with her star status, Winfield Sheehan built Temple a four room bungalow at the studio with a garden, a picket fence, a tree with a swing, and a rabbit pen. The living room wall was painted with a mural depicting her as a fairy tale princess wearing a golden star on her head. Under Zanuck, she was assigned a bodyguard, John Griffith, a childhood friend of Zanucks, and, at the end of 1935, Frances Klammie Klampt became her tutor at the studio.

Biographer Anne Edwards wrote about the tone and tenor of Shirley Temple films, This was mid-Depression, and schemes proliferated for the care of the needy and the regeneration of the fallen. But they all required endless paperwork and demeaning, hours long queues, at the end of which an exhausted, nettled social worker dealt with each person as a faceless number. Shirley offered a natural solution: to open ones heart. Edwards pointed out that the characters created for Temple would change the lives of the cold, the hardened, and the criminal with positive results. Her films were seen as generating hope and optimism, and President Franklin D. Roosevelt said, It is a splendid thing that for just fifteen cents, an American can go to a movie and look at the smiling face of a baby and forget his troubles.

Most of the Shirley Temple films were inexpensively made at $200,000 or $300,000 apiece and were comedy dramas with songs and dances added, sentimental and melodramatic situations, and bearing little production value. Her film titles are a clue to the way she was marketed Curly Top and Dimples, and her little pictures such as The Little Colonel and The Littlest Rebel. Shirley often played a fixer upper, a precocious Cupid, or the good fairy in these films, reuniting her estranged parents or smoothing out the wrinkles in the romances of young couples. Elements of the traditional fairy tale were woven into her films: wholesome goodness triumphing over meanness and evil, for example, or wealth over poverty, marriage over divorce, or a booming economy over a depressed one. As the girl matured into a pre-adolescent, the formula was altered slightly to encourage her naturalness, naïveté, and tomboyishness to come forth and shine while her infant innocence, which had served her well at six but was inappropriate for her tweens (or later childhood years), was toned down.

1935 - 1937
In the contract they signed in July 1934, Temples parents agreed to four films a year (rather than the three they wished). A succession of films followed: The Little Colonel, Our Little Girl, Curly Top (with the signature song Animal Crackers in My Soup), and The Littlest Rebel in 1935. Curly Top and The Littlest Rebel were named to Varietys list of top box office draws for 1935. In 1936, Captain January, Poor Little Rich Girl, Dimples, and Stowaway were released. Curly Top was Shirleys last film before the merger of 20th Century and Fox.

Based on Temples many screen successes, Zanuck increased budgets and production values for her films. By the end of 1935, her salary was $2,500 a week. In 1937, John Ford was hired to direct the sepia toned Wee Willie Winkie (Temples own favorite) and an A list cast was signed that included Victor McLaglen, C. Aubrey Smith and Cesar Romero. Elaborate sets were built at the famed Iverson Movie Ranch in Chatsworth, for the production, with a rock feature at the heavily filmed location ranch eventually being named the Shirley Temple Rock. The film was a critical and commercial hit. Subsequently Shirley Temple and Twentieth Century-Fox sued critic British writer/critic Graham Greene for libel and won. The settlement remained in trust for the girl in an English bank until she turned 21, when it was donated to charity and used to build a youth center in England.

Heidi was the only other Shirley Temple film released in 1937. Midway through the shooting of the movie, the dream sequence was added to the script. There were reports that the little actress was behind the dream sequence and she had enthusiastically pushed for it, but in her autobiography, she vehemently denied it. Her contract gave neither her nor her parents any creative control over the movies she was in. She saw this as the collapse of any serious attempt by the studio to build upon the dramatic role from the previous movie Wee Willie Winkie. 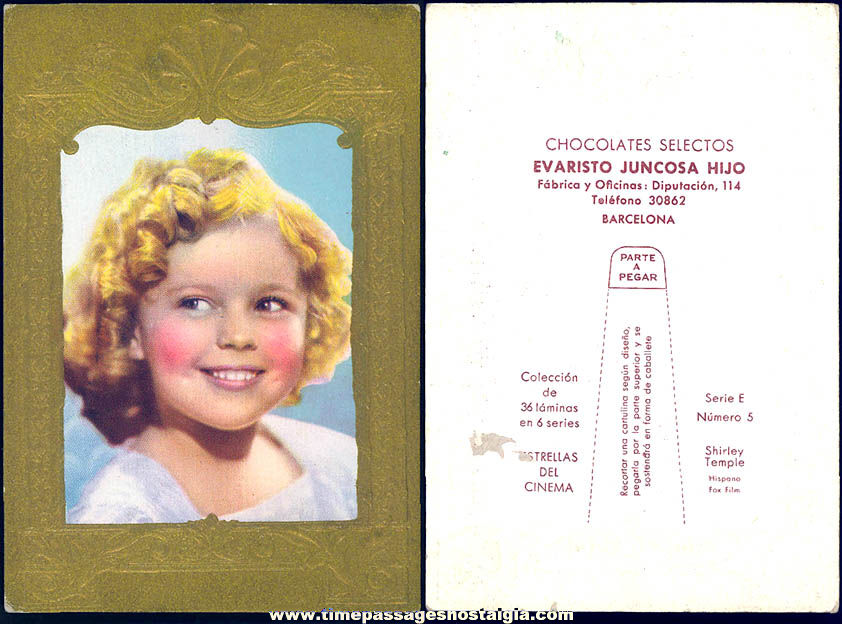