Gemini 12 (officially Gemini XII) was a 1966 manned spaceflight in NASA's Gemini program. It was the 10th manned Gemini flight, the 18th manned American flight and the 26th spaceflight of all time (includes X-15 flights over 100 km).

Crew
Number in parentheses indicates number of spaceflights by each individual prior to and including this mission.
James A. Lovell, Jr (2) - Command Pilot
Edwin E. Aldrin, Jr(Buzz Aldrin) (1) - Pilot

Objectives
At the completion of the previous Gemini flight, the program still had not demonstrated that an astronaut could work easily and efficiently outside the spacecraft. In preparation for Gemini XII, new, improved restraints were added to the outside of the capsule, and a new technique, underwater training, was introduced, which would become a staple of all future space walk simulation. Aldrin's two hour, 20 minute tethered space walk, during which he photographed star fields, retrieved a micrometeorite collector and did other chores, at last demonstrated the feasibility of extravehicular activity. Two more stand up EVAs also went smoothly, as did the by now routine rendezvous and docking with an Agena which was done ''manually'' using the onboard computer and charts when a rendezvous radar failed. The climb to a higher orbit, however, was canceled because of a problem with the Agena booster. Many documentaries afterward largely credit the spacewalk innovations, including the underwater training, to Aldrin himself. Gemini 12 was designed to perform rendezvous and docking with the Agena target vehicle, to conduct three Extravehicular Activity (EVA) operations, to conduct a tethered stationkeeping exercise, to perform docked maneuvers using the Agena propulsion system to change orbit, and demonstrate an automatic reentry.

The capsule was controlled on reentry by computer and splashed down 4.8 kilometers from its target. The Gemini 12 mission was supported by the following U.S. Department of Defense resources; 9,775 personnel, 65 aircraft and 12 ships.

The patch's unique orange and black colors are a link to the flight's original scheduled date close to Halloween. The Roman numeral XII is located at the 12 o'clock position on the face of a clock, with the Gemini spacecraft pointing to it like the hour hand of a clock. This represents the position of Gemini 12 as the last flight of the Gemini program. With the Apollo project following this last flight of the Gemini program, the ultimate objective, the moon, is symbolized by the crescent on the left.

After several years at the Museum of Transport and Technology, in Auckland, New Zealand, the spacecraft was returned to the United States. It is now on display at the Adler Planetarium, Chicago, Illinois. Jim Lovell and Buzz Aldrin were reunited with the spacecraft November 9, 2006 during the opening for Adler's ''Shoot for the Moon'' exhibit, almost 40 years after the mission launched. Lovell and Aldrin's voices are used for the exhibition's recorded narration. 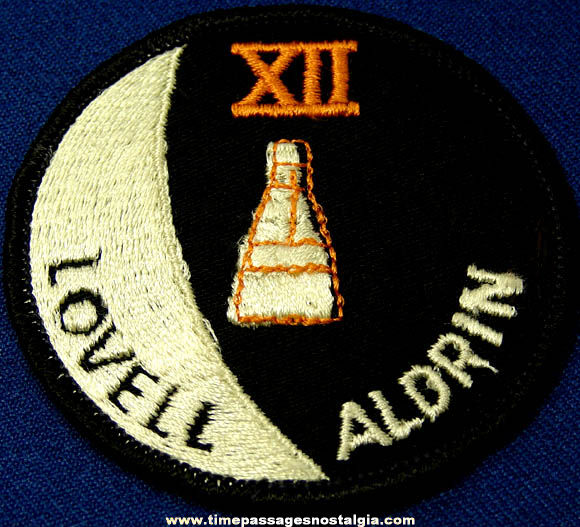