The U.S.S. Little Rock (CL-92 / CLG-4 / CG-4) was one of 27 United States Navy Cleveland class light cruisers completed during or shortly after World War II, and one of six to be converted to guided missile cruisers. She was the first U.S. Navy ship to be named for Little Rock, Arkansas. Commissioned in mid 1945, she was completed too late to see combat duty during World War II. After an initial South American cruise, she spent the next few years serving off the east coast of the United States, in the Caribbean, and in the Mediterranean. Like all but one of her sister ships, she was retired in the post war defense cutbacks, becoming part of the Atlantic Reserve Fleet in 1949.

In the late 1950s she was converted to a Galveston class guided missile cruiser, which involved removing all her aft six inch and five inch guns and rebuilding her aft superstructure to accommodate the Talos missile system. Also, like three other of her sister Cleveland ships converted to missile ships, she was also extensively modified forward to become a flagship. This involved removal of most of her forward armament to allow for a greatly enlarged superstructure. She was recommissioned in 1960 as CLG-4 (and in 1975 redesignated CG-4). In her new career she served extensively in the Mediterranean, often as the Sixth Fleet flagship. She decommissioned for the last time in 1976 (after 20 years and 4 months of commissioned service), and is now a museum ship at Buffalo and Erie County Naval & Military Park in New York. Little Rock is the sole surviving member of the Cleveland class.

Service History
1945 - 1949
After shakedown off Cuba and training along the Atlantic coast, Little Rock departed Newport, Rhode Island, 21 October for South America. Following this five month cruise to Latin countries, the cruiser returned Norfolk 23 March 1946. For the next two months she performed exercises off the east coast and in the Caribbean, before sailing for Europe 4 June. After operating with the 6th Fleet throughout the summer. Little Rock returned Norfolk 27 September 1946. From November 21 - 27, 1946, U.S.S. Missouri (BB-63) was en route to Davis Strait as part of Task Group 20.2, which also included the cruiser Little Rock and destroyer USS Fechteler (DD-870). Between November 27 and December 4, she participated in cold weather exercises in Davis Strait, between Greenland and East Baffin Island, as part of Task Group 20.2. An incident during that cruise involving Little Rock. She was off the port side firing 5 inch star shells for illumination, to spot icebergs, when there was a misfire. According to standard procedure the gunner began to point the barrel toward the water to wait out a hangfire. However, the round cooked off halfway down. The round hit Missouri on the signal bridge, killing Coxswain Robert Fountain and starting a fire involving an acetylene tank which was lashed to the railing. One or two officers' cabins were destroyed as well. Missouri did not get back to Norfolk until December 13, 1946. From September 1946 to 1949, Little Rock performed east coast exercises; operated in the Caribbean on training maneuvers; and sailed to the Mediterranean during 1947 and 1948. Little Rock decommissioned 24 June 1949 and joined the Atlantic Reserve Fleet at New York.

Converted to guided missile cruiser
Reclassified CLG-4 on 23 May 1957, Little Rock began a major conversion to a guided missile light cruiser of the Galveston class. This refit included replacing the aft six inch turrets with a Talos missile battery. She recommissioned at Philadelphia 3 June 1960, Capt. J. O. Phillips in command. The cruiser performed shakedown training in the Caribbean, test firing her Talos missiles to prepare to join the Navy's rapidly expanding fleet of ships armed with guided missiles capable of delivering a nuclear punch.

19611976
Departing Philadelphia 9 February 1961, Little Rock sailed for her first European cruise in her new role. After six months operating with the 6th Fleet and NATO units, the guided missile cruiser returned to Norfolk during September. While operating in the Caribbean, 18 November 1961, Little Rock was ordered to the waters off Santo Domingo to provide an element of stability during the uncertainty and unrest which plagued that country as rival factions vied to fill the political vacuum created by the assassination of Rafael Trujillo.

For the next four years Little Rock annually sailed to the Mediterranean, joining the 6th Fleet. She relieved U.S.S. Springfield, as Sixth Fleet flagship from May to December 1963 as she maintained the peace in southern Europe and the Middle East. During the months between deployments to the Mediterranean, she operated off the east coast, in the Caribbean, and off northern Europe with units of NATO countries. Remaining on the east coast during 1966 for overhaul and refresher training. In 1967 she relieved the USS Springfield as the Sixth fleet flagship at Rota Spain and proceeded to her new home port at Gaeta, Italy. While away from Gaeta, she participated in exercises in the Mediterranean and carried the admiral to foreign ports. In 1967 the Six Day War broke out and she steamed to the eastern Mediterranean as command ship for NATO vessels in the area. When Israeli forces attacked the U.S.S. Liberty, Little Rock went to her aid and was the second ship to arrive. She provided zone security and medical assistance to injured crew members of Liberty. During an exercise in mid 1970, she collided with Greek destroyer Lonchi (D56), damaging her bow. The bow was temporarily repaired at Malta. In September, she returned to the United States and underwent a major yard overall in the Boston Naval Shipyard from November 1970 to the Spring of 1971. After refresher training, she returned to duty as flagship of the Sixth Fleet.

Between 1970 and 1972, Raymond Edwin Ray Mabus, Jr. served aboard the Little Rock as a surface warfare officer. In 2009, Mabus was appointed as the seventy-fifth Secretary of the Navy, serving in the Obama administration. On 5 June 1975 Little Rock participated in the ceremonies marking the reopening of the Suez Canal. Third in line in the parade of ships she transited the northern part of the Canal from Port Said to Ismaïlia. After the transit, Little Rock made a port visit to Alexandria, Egypt. Leaving Alexandria she crossed the Mediterranean and visited Dubrovnik, Yugoslavia, which was then a communist country. In the spring of 1976 the Talos SAM system was deactivated U.S. Navy wide, and Little Rock was no exception. While plans and funding were made for an extensive overhaul, modernization, and new weapons fit, a boiler room casualty occurred during the summer of 1976 while she was cruising in the Mediterranean. A field survey revealed the ship's propulsion system was in a significantly dire material condition and would require extensive and expensive overhauls and repairs. Given the ships age, only minimal repairs were made to allow the ship to transit back to Norfolk, Virginia. Further survey inspections were made, however it was decided that the ship would be decommissioned in the fall of 1976. A year later the ship was towed via the Saint Lawrence Seaway to Buffalo, N.Y., where she is open to public touring at the Buffalo Naval & Military Park. 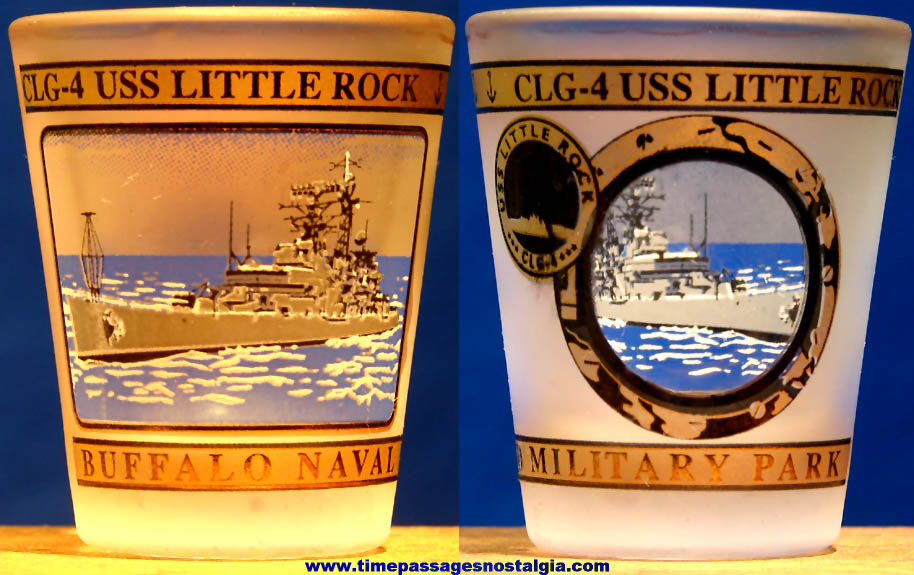