Courageous Cat and Minute Mouse is a children's cartoon television show that was produced by Trans-Artists Productions and syndicated by Tele Features Inc. in 1960. The characters were created by Bob Kane as a spoof of his earlier creations, Batman and Robin. In many ways, Courageous Cat and Minute Mouse presages the campier aspects of the later Batman live action series, which William Dozier and Howie Horwitz produced as a villain driven action - comedy lampoon.

Plot
In the animated series, the pair are anthropomorphic animal superheroes without known secret identities (the green eyed caped crimefighter and his squeaky voiced companion are usually addressed as simply Courageous and Minute) who live in the Cat Cave and, when summoned via the Cat Signal over their television set, race to the scene of the crime in their sleekly feline red Cat Mobile which can convert into both the extendable winged Cat Plane and submersible Cat Boat and thwart the criminal plots of various villains who threaten Empire City. Though they fought many miscreants, the duo's recurring arch enemy, who appeared in nearly every episode, was known as Chauncey Flat Face Frog. The five minute length of the cartoons made the series suitable for use as interstitials or airtime fillers, especially to accommodate a movie or show that ended at an unusually early time, as well as animated content for local children's shows.

Courageous Cat - The protector of Empire City. Whenever fighting bad guys, Courageous Cat would use his all purpose Cat Gun or a vast variety of different deus ex machina trick guns he pulls out of his cape that (like the Green Arrow's trick arrows) fire whatever the situation requires like a rope, some water, a parachute, cages, boxing gloves, lightning like magnetic rays, or even more bizarre ammunition, and even the occasional actual bullet. (In case of emergency, Courageous also has extra pre James Bond secret gadgets hidden in his belt buckle and the star emblem on his chest.)

The Chief - A canine chief of police who calls in the furry foes of felony via the Cat Signal.

Sassy Bones - A blond mouse who is a chanteuse at nightclub called The Pad, with whom Rodney Rodent is enamored.

Periscope Pete - A living, breathing periscope with a bush for a body.

Professor Shaggy Dog - A mad scientist with an Einsteinian mop of white hair who is tall, thin and bewhiskered in some episodes and short and bespectacled in others.

Big Shot and Little Shot - A burly bulldog (talks like James Cagney in some episodes) and his short sidekick are a generic gruff gangster who are Chauncey Flat-Face Frog's rivals in crime.

The Black Cat - A sinister thief. He is a cat burglar who is a caricature of Cary Grant.

Shoo Shoo Fly - A tiny insect whose small size belies its enormous appetite, its name is a reference to Shoofly pie and the tsetse fly.

Robber Rabbit - A gravel voiced thug in a black turtleneck.

Foxy the Fox - A debonair thief in top hat and tuxedo.

The Great Hambone - An egotistical canine actor and master of disguise.

Professor Von Noodle Stroudel / Strudel - A German accented scientist who is not so much a villain as unconcerned about the effects of his experiments on the world around him.

The Unmentionables and The Unthinkables - Rival gangs headed by Chauncey Flat-Face Frog and Big Shot. Their names are a parody of The Untouchables. 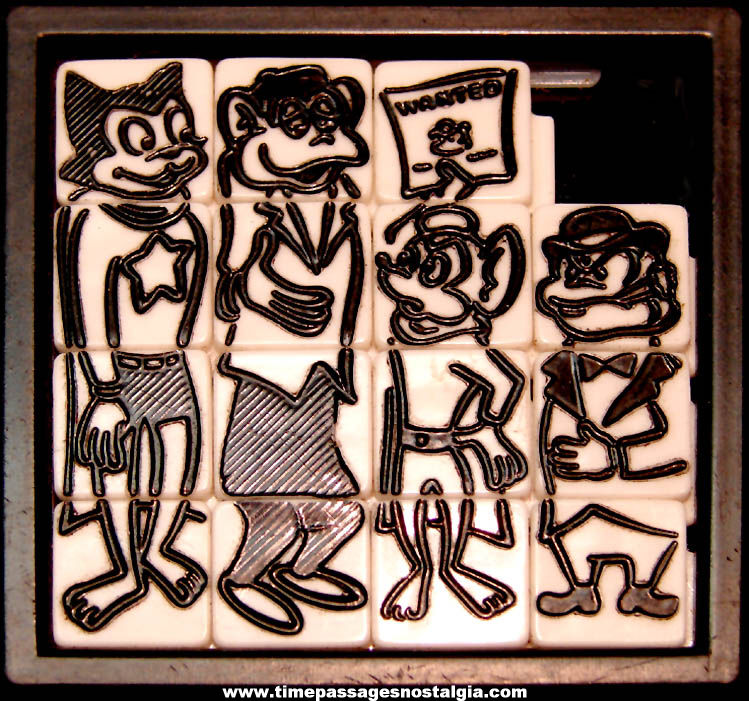