The match book cover measures 1-1/2'' x 3-7/8''. It appears to be in excellent condition as pictured with one match missing. Below here, for reference, is some additional information about Hotel Whitcomb, which is still in operation today:

Experience A Part of San Francisco History
The Hotel Whitcomb echoes the graciousness of turn of the century San Francisco with Austrian crystal chandeliers, beautiful marble, Tiffany Stained Glass and rare Janesero paneling adorning the elegant lobby. Originally named Hotel Whitcomb, after wealthy San Franciscan A. C. Whitcomb, the hotel then went through a few name changes over the years until it's proper name will be restored in 2007.ÊThe hotel bears the city's history as deeply as the 1906 earthquake altered the destiny of the yet unbuilt hotel.

During the post earthquake reconstruction period of 1910, city architects Rushforth and Cahill were drawing plans for the new hotel. The proposed site, facing Civic Center, attracted the attention of city leaders who needed a temporary City Hall while the original was being rebuilt. Inspired by a sense of civic pride, the Whitcomb Estate agreed to have their hotel used as City Hall. The architects of Hotel Whitcomb used all of their ingenuity to affect a compromise between the original and secondary plans. Hotel Whitcomb served as the seat of government for San Francisco from 1912 through 1915.

Until the mid 1990s, the words City Hall could still be seen faintly etched above the main entrance. The Mayor's office, once located on the mezzanine level, now serves as the administrative office. Guests stay on the remaining floors of the hotel that were once occupied by other government officials, including judges for the Superior Court. Remnants of the original jail cells are still intact in the basement of the hotel and used for storage rooms today.

Enjoy San Francisco's True Historic Boutique Hotel
Officially opening its doors as Hotel Whitcomb in 1916, the hotel soon became the place to see and be seen. Concerts were broadcast nationwide from the Whitcomb Ballroom, and the grand hotel still boasts one of the largest parquet dance floors in the city. While appearing at the nearby War Memorial Opera House and theaters, Opera and Symphony stars and actors have all made the hotel their home in San Francisco.

Through the years, Hotel Whitcomb has undergone various renovations and upgrades to maintain its level of elegance and charm, while remaining true to the gracious traditions that embody its spirit of San Francisco hospitality and community. 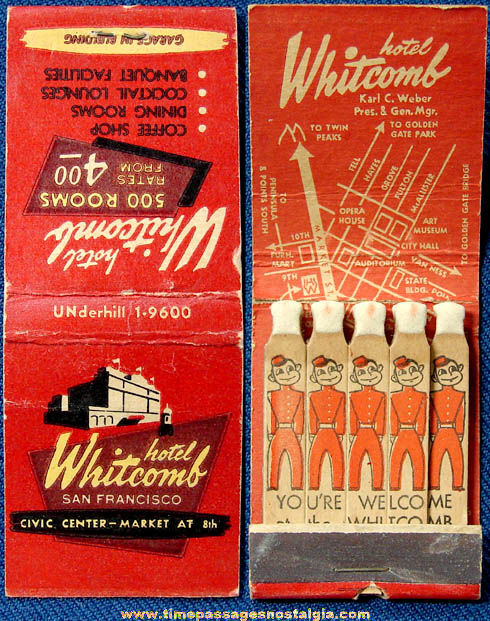