The U.S.S. Bainbridge (DLGN-25 / CGN-25) was the only ship of her class. Initially a guided missile destroyer leader in the United States Navy, she was re-designated as a guided missile cruiser in 1975. This ship was nuclear powered.

The U.S.S. Bainbridge was designed and built by Bethlehem Shipbuilding Corporation at Fore River Shipyard at Quincy, Massachusetts. Commissioned in October 1962, she shook down off the East Coast and in the Caribbean area until February 1963, when she began her first Mediterranean deployment. This included demonstrations of her long range high speed dash capabilities and operations with the nuclear powered aircraft carrier Enterprise. Bainbridge returned to the Mediterranean Sea in May 1964, this time joining Enterprise and the guided missile cruiser Long Beach to form the all nuclear powered Task Force 1. At the end of July, the three ships began Operation ''Sea Orbit'', a two month unrefueled cruise around the world.

In October 1965, Bainbridge again rounded Cape Agulhas, en route to the Western Pacific for the first of eleven Seventh Fleet cruises. Operating for much of this deployment off strife torn Vietnam, she screened aircraft carriers, served as a radar picket ship, and performed search and rescue missions. In June, the frigate crossed the Pacific to her new home port, Long Beach, California. Her next five Far Eastern tours, in 1966 - 1967, 1969, 1970, 1971 and 1972 - 1973, also involved Vietnam War combat operations, as well as voyages to Australia and, beginning in 1970, the Indian Ocean. In 1967 - 1968, Bainbridge underwent shipyard overhaul and her first nuclear refueling. The ship's seventh trip to the Far East, beginning in November 1973, included a lengthy visit to the Indian Ocean and Arabian Sea, a locale that would become very familiar in the coming decades.

The Bainbridge received an extensive modernization and refueling between June 1974 and September 1976, with post overhaul work lasting until April 1977. While in the shipyard, at the end of June 1975, she was reclassified from frigate (destroyer leader) to cruiser, receiving the new designation CGN-25. Her next Seventh Fleet deployment ran from January to August 1978 and included visits throughout the region, from Japan and South Korea to Thailand and Singapore, with her homeward bound voyage taking her to Australia and through the South Pacific. Bainbridge made three more WestPac tours, in 1979 - 1980, 1981 and 1982 - 1983, each involving extensive operations in the Indian Ocean and Arabian Sea.

In 1982 she won the Marjorie Sterrett Battleship Fund Award.
After receiving her final nuclear refueling overhaul in 1983 - 1985, Bainbridge left the Pacific after two decades, transited the Panama Canal and rejoined the U.S. Atlantic Fleet. Her operations thereafter included counter drug smuggling patrols in the Caribbean, several deployments to northern European waters and four Mediterranean cruises (1986 - 1987, 1988 - 1989 including combat operations off Libya, 1991 - 1992 with a Red Sea and Persian Gulf tour, and 1994 as Standing Naval Force Atlantic (STANAVFORLANT). The 1994 deployment supported United Nations resolutions that became part of Operation Sharp Guard, which enforced sanctions against the Former Republic of Yugoslavia. During these operations, she safely conducted over 100 boardings of merchant vessels to inspect for illegal cargo shipments. Bainbridge also supported Operation Deny Flight, where she acted as ''REDCROWN'' coordinating the air warfare environment over Bosnia. Bainbridge's AAW suite could provide almost complete radar coverage of the airspace over Bosnia and the Adriatic. With her SM-2 ER missiles, she could engage more than 16 aircraft or cruise missiles simultaneously; and at ranges in excess of 75 nautical miles (139 km).

Deactivated in October 1995, Bainbridge decommissioned in September 1996. She was towed to Bremerton, Washington in mid 1997, and in October of that year entered dry dock to begin ''recycling'', the process by which nuclear powered warships are scrapped. 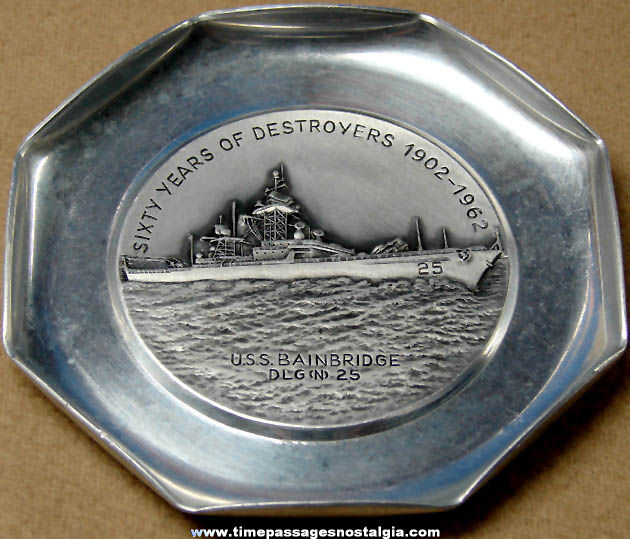