Howard the Duck is a comic book character in the Marvel Comics universe created by writer Steve Gerber and artist Val Mayerik. The character first appeared in Adventure into Fear #19 (Dec. 1973) and several subsequent series have chronicled the misadventures of the ill tempered, anthropomorphic, ''funny animal'' trapped on human dominated Earth. Howard's adventures are generally social satires, and also often parodies of genre fiction with a metafictional awareness of the medium.

Howard the Duck was created in 1973 by Steve Gerber and Val Mayerik in Adventure into Fear as a secondary character in that comic's Man Thing feature. He graduated to his own backup feature in Giant Size Man Thing, confronting such bizarre horror parody characters as the Hellcow and the Man Frog, before acquiring his own comic book title with Howard the Duck #1 in 1976.

Gerber wrote 27 issues of the series, illustrated by a variety of artists, beginning with Frank Brunner, who left because he considered Howard a cartoon in the real world, which Gerber did not, with Gene Colan eventually becoming the regular penciller. The series gradually developed a substantial cult following, possibly amplified by Howard's entry into the 1976 U.S. presidential campaign under the auspices of the All Night Party (an event later immortalized in a brief reference in Stephen King's The Tommyknockers). Marvel attempted a spin off with a short lived Howard the Duck newspaper strip from 1977 to 1978, at first written by Gerber and drawn by Colan and Mayerik, later written by Marv Wolfman and drawn by Alan Kupperberg.

Gerber gained a degree of creative autonomy when he became Howard the Duck's editor in addition to his writing duties (as evidenced by the credits on later issues), which was unusual for mass market comics writers of the time, and the stories became increasingly experimental. At one point, unable to meet the deadline for his regular script, Gerber substituted an entire issue of text pieces and illustrations satirizing his own difficulties as a writer. One of those illustrated text pieces inspired Gerber's Vertigo series Nevada.

In 1978, the writer and publisher clashed over issues of creative control, and Gerber was abruptly removed from the series. This was the first highly publicized creator's rights case in American comics, and attracted support from major industry figures, some of whom created homage/parody stories with Gerber to dramatize the case; these included Destroyer Duck with Jack Kirby. Disney also threatened to sue Marvel for infringing Donald Duck's copyright and enforced a different design, including the use of pants (as seen in the movie and some later comics).

The series continued for four more issues with stories by Marv Wolfman, Mary Skrenes, Mark Evanier, and Bill Mantlo. Gerber returned briefly to write, though not plot, #29 as part of a contract fulfillment. Harvey Pekar, himself a Cleveland resident, was mentioned as a possible replacement for Gerber, but he was unavailable, and nothing came of it.

Issue #31, dated May 1979, announced on its letters page that it would be the final issue of Howard the Duck as a color comic. Marvel then relaunched the series that year as a bimonthly magazine, with scripts by Mantlo, art by Colan and Michael Golden and unrelated backup features by others; this series was canceled after nine issues. Articles in these issues claimed that Howard was Mayerik's idea, though this is contrary to statements by both Gerber and Mayerik (it would, however, conform to the ''Marvel way'' of comics creation art first akin to Kirby's creation of Silver Surfer without initial input from Stan Lee). The first story of issue #9, written by Bill Mantlo, had Howard walk away from Beverly, and what happened to him next was documented in a story by Steve Skeates the same issue. Steven Grant followed this with a story in Bizarre Adventures #34, in which the suicidal Howard is put through a parody of It's a Wonderful Life.

The original comic book series reappeared in early 1986 with issue #32, written by Grant. Issue #33, a parody of Bride of Frankenstein, written by Christopher Stager, appeared nine months later, along with a three issue adaptation of the movie. 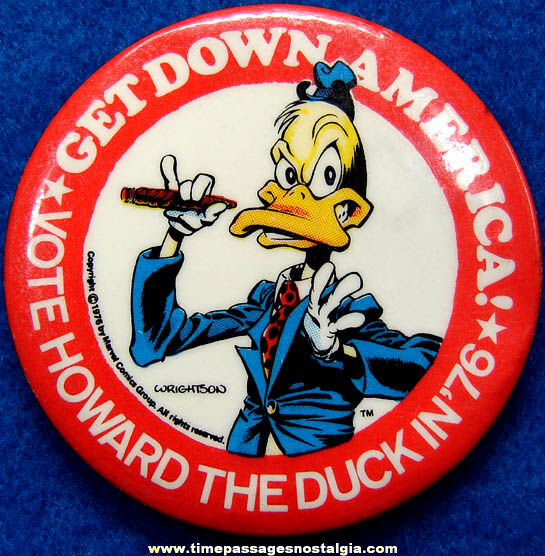