There are four core individuals traditionally associated with the Fantastic Four, who gained superpowers after exposure to cosmic rays during a scientific mission to outer space. Mr. Fantastic (Reed Richards) is a scientific genius and the leader of the group who can stretch his body into incredible lengths and shapes. The Invisible Woman (Susan ''Sue'' Storm) is Reed's wife; she can render herself invisible and project powerful force fields. The Human Torch (Johnny Storm) is Sue's younger brother, who can generate flames, surround himself with them and fly. The final member is the monstrous Thing (Ben Grimm), their grumpy but benevolent friend, who possesses superhuman strength and endurance. Since the original four's 1961 introduction, the Fantastic Four have been portrayed as a somewhat dysfunctional yet loving family. Breaking convention with other comic book archetypes of the time, they would squabble and hold grudges both deep and petty, and eschew anonymity or secret identities in favor of celebrity status.

The Fantastic Four have been adapted into other media, including four animated television series, an aborted 1990s low budget film, the major motion picture Fantastic Four (2005), and its sequel, Fantastic Four: Rise of the Silver Surfer (2007).

The Fantastic Four is formed when during an outer space test flight in an experimental rocket ship, the four protagonists are bombarded by a storm of cosmic rays. Upon crash landing back on Earth, the four astronauts find themselves transformed with bizarre new abilities. The four then decide to use their powers for good as superheroes. In a significant departure from preceding superhero conventions, the Fantastic Four make no effort to maintain secret identities as they maintain a high public profile, enjoying celebrity status for scientific and heroic contributions to society. At the same time they are often prone to arguing and even fighting with one another. Despite their bickering, the Fantastic Four consistently prove themselves to be ''a cohesive and formidable team in times of crisis.'' While there have been a number of lineup changes to the group, the four characters who debuted in Fantastic Four #1 remain the core and most frequent lineup.

Mister Fantastic (Reed Richards), a scientific genius, can stretch, twist and re-shape his body to inhuman proportions. Mr. Fantastic serves as the father figure of the group, and is ''appropriately pragmatic, authoritative, and dull''. Richards blames himself for the failed space mission, particularly because of how the event transformed pilot Ben Grimm.

Invisible Girl - Woman (Susan Storm), Reed Richards' girlfriend (and eventual wife) has the ability to bend and manipulate light to render herself and others invisible. She later develops the ability to generate force fields, which she uses for a variety of defensive and offensive effects.

The Human Torch (Johnny Storm), Sue Storm's younger brother, possesses the ability to control fire, project burning bolts of flame from his body, and fly. This character was loosely based on a Human Torch character published by Marvel's predecessor Timely Comics in the 1940s, an android that could ignite itself. Lee said that when he conceptualized the character, ''I thought it was a shame that we didn't have The Human Torch anymore, and this was a good chance to bring him back''. Unlike the teen sidekicks that preceded him, the Human Torch in the early stories was ''a typical adolescent brash, rebellious, and affectionately obnoxious''.

The Thing (Ben Grimm), Reed Richards' college roommate and best friend, has been transformed into a monstrous, craggy humanoid with orange, rock like skin and super strength. The Thing is often filled with anger, self loathing and self pity over his new existence. He serves as ''an uncle figure, a longterm friend of the family with a gruff Brooklyn manner, short temper, and caustic sense of humor''. In the original synopsis Lee gave to Kirby, The Thing was intended as ''the heavy'', but over the years the character has become ''the most lovable group member: honest, direct and free of pretension''.

The Fantastic Four has had several different headquarters, most notably the Baxter Building in New York City. The Baxter Building was replaced by Four Freedoms Plaza, built at the same location, after the Baxter Building's destruction at the hands of Kristoff Vernard, adopted son (and rumored half brother of Mr. Fantastic) of the Fantastic Four's seminal villain Doctor Doom. Pier 4, a warehouse on the New York waterfront, served as a temporary headquarters for the group after Four Freedoms Plaza was condemned, due to the actions of another superhero team, the Thunderbolts. 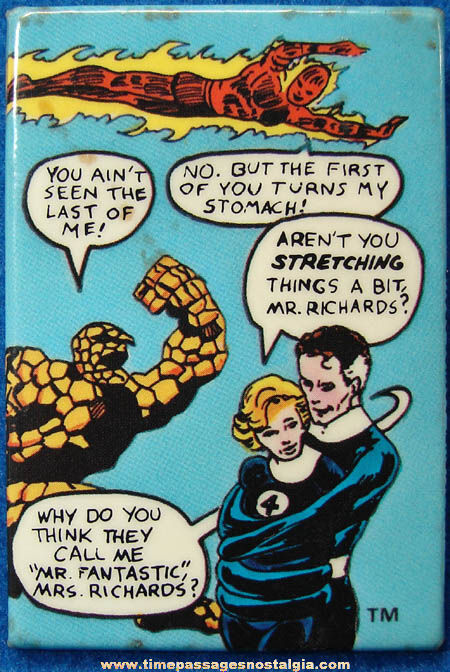