Dukakiss father Panos (1896 - 1979) was a Greek from Asia Minor who settled in Lowell, Massachusetts in 1912 and graduated from Harvard Medical School twelve years later, subsequently working as an obstetrician. His mother Euterpe (née Boukis) (1903 - 2003) was a Greek immigrant from Larissa; she and her family emigrated to Haverhill, Massachusetts in 1913. She was a graduate of Bates College.

After winning four terms to the Massachusetts House of Representatives between 1962 and 1970, Dukakis was elected governor in 1974, defeating the incumbent Republican Francis W. Sargent during a period of fiscal crisis. Dukakis won in part by promising to be a reformer and pledging not to increase the states sales tax to balance the state budget. He broke that pledge soon after taking office. He also had pledged to dismantle the powerful Metropolitan District Commission, a bureaucratic enclave that served as home to hundreds of political patronage employees. The MDC managed (some would say mismanaged) Massachusetts parks, reservoirs, and waterways, as well as the highways and roads abutting those waterways. The MDC not only had its own police force, but its own navy as well, and an enormous budget from the State, for which it provided the most minimal accounting. The Dukakis pledge to dismantle MDC failed in the Legislature where MDC had many powerful supporters and ultimately came back to haunt Dukakis when the MDC withheld its critical backing in the 1978 gubernatorial primary.

However, this performance did not prove enough to offset a backlash against the states high sales and property tax rates, which turned out to be the predominant issue in the 1978 gubernatorial campaign. Dukakis, despite being the incumbent Democratic governor, was refused re-nomination by his own party. The state Democratic Party machine supported Edward J. King in the primary partly because King rode the wave against high property taxes (along with the passing of a binding petition on the state ballot that limited property tax rates to 2-1/2% of the property valuation, known as Proposition 2-1/2), but more significantly because State Democratic Party leaders lost confidence in Dukakiss ability to govern effectively. King also enjoyed the support of the powerbrokers at the MDC, who were unhappy with Dukakiss attempts to disempower and dismantle the powerful bureaucracy. King also had support from state police and public employee unions. Dukakis suffered a scathing defeat in the primary. It was a public death, according to his wife Kitty.

Yet, four years later (after wandering in the wilderness some said), having made peace with the state Democratic Party machine powerbrokers, MDC, the state police and public employee unions, Dukakis defeated King in a re-match in the 1982 Democratic primary. He went on to defeat his Republican opponent John Winthrop Sears, who was MDC Commissioner under Sargent, in the November election. Future Democratic Presidential nominee John Kerry was elected lieutenant governor on the same ballot with Dukakis, and served in the Dukakis administration from 1983 - 1985.

Dukakis served as governor again from 1983 - 1991 (winning re-election in 1986 with more than 60 percent of the vote) during which time he presided over a high tech boom and a period of prosperity in Massachusetts and simultaneously getting the reputation for being a technocrat. The National Governors Association voted Dukakis the most effective governor in 1986. Residents of the city of Boston and its surrounding areas remember him for the improvements he made to Bostons mass transit system, especially major renovations to the citys trains and buses. He was known as the only governor who rode the subway to work every day.

He made a cameo appearance in the medical drama St. Elsewhere (Season 3, Episode 15, Bye, George, January 9, 1985). He limps to the hospital desk and says that he has suffered a jogging injury, but Dr. Fiscus (played by Howie Mandel) refuses to believe that he is the governor.

Soon after his loss in the 1988 Presidential election to George H.W. Bush, the so-called Massachusetts Miracle of prosperity also went bust, and Dukakis was little more than a lame duck governor for his final two years in office. At the close of his tenure, Massachusetts was mired deeply in debt facing a budget shortfall of more than $1.5 billion.

Using the phenomenon termed the Massachusetts Miracle to promote his campaign, Dukakis sought the Democratic Party nomination for President of the United States in the 1988 elections, prevailing over a primary field which included Jesse Jackson, Richard Gephardt, Gary Hart and Al Gore, among others. Dukakiss success at the primary level has been largely attributed to John Sasso, his campaign manager. Sasso, however, was among two aides dismissed (Paul Tully was the other one) when a video showing plagiarism by rival candidate Joseph Biden (D-Delaware) was made public and an embarrassed Biden was forced to withdraw from the race. This situation got uglier when Tully implied that it was Dick Gephardts campaign (as opposed to Dukakiss campaign) that actually passed along the damaging information on Biden.

Despite the claims that Dukakis always turned the other cheek, he did run a particularly effective commercial against rival Dick Gephardt that featured a tumbler doing somersaults while the announcer said, Dick Gephardt has been flip flopping over the issues. Dukakis finished third in the Iowa caucuses and then became the first candidate to ever win a contested New Hampshire primary by more than ten points with Gephardt finishing second. Dukakis finished first in Minnesota and second in South Dakota before winning five states on March 8, 1988, the ''Super Tuesday'' primaries. As his competition continued to fade, Dukakis wound up with a seven week stretch of one on one elections between himself and civil rights leader Jesse Jackson. Dukakis lost the Michigan caucus to Jackson but then prevailed by margins of two to one in Wisconsin, New York, Pennsylvania, Ohio, California, and New Jersey, clinching the nomination on June 7, 1988.

Touching on his immigrant roots, Dukakis used Neil Diamonds ode to immigrants America as the theme song for his campaign. Famed composer John Williams wrote Fanfare for Michael Dukakis in 1988 at the request of Dukakiss father in law Harry Ellis Dickson. The piece was premiered under the baton of Dickson (then the Associated Conductor of the Boston Pops) at that years Democratic National Convention in Atlanta. During the general election campaign, Vice President George H. W. Bush, the Republican nominee, criticized Dukakis for his traditionally liberal positions on many issues. These included Dukakiss statement during the primary season that he was a card carrying member of the American Civil Liberties Union, his veto of legislation requiring public school teachers to lead pupils in the Pledge of Allegiance, and his opposition to the resumption of capital punishment in the United States.

Dukakis had trouble with the personality that he projected to the voting public. His reserved and stoic nature was easily interpreted to be a lack of passion (which went against the ethnic stereotype of his Greek-American heritage). Dukakis was often referred to as Zorba the Clerk. Nevertheless, Dukakis is considered to have done well in the first presidential debate with George Bush. In the second debate, Dukakis had been suffering from the flu and spent quite a bit of the day in bed. His performance was poor and played to his reputation as being cold.

During the campaign, Dukakiss mental health became an issue when he refused to release his full medical history and there were, according to The New York Times, persistent suggestions that he had undergone psychiatric treatment in the past. The issue even caused then President Ronald Reagan, when asked whether the Democratic Presidential nominee should make his medical records public, to quip with a grin: Look, I'm not going to pick on an invalid. Twenty minutes later, Reagan stated that he attempted to make a joke in response to a question and that I think I was kidding, but I dont think I should have said what I said. Reagan continued, I do believe that the medical history of a President is something that people have a right to know, and I speak from personal experience. Dr. Gerald R. Plotkin, Dukakiss physician since 1970, stated that Dukakis has had no psychological symptoms, complaints or treatment. 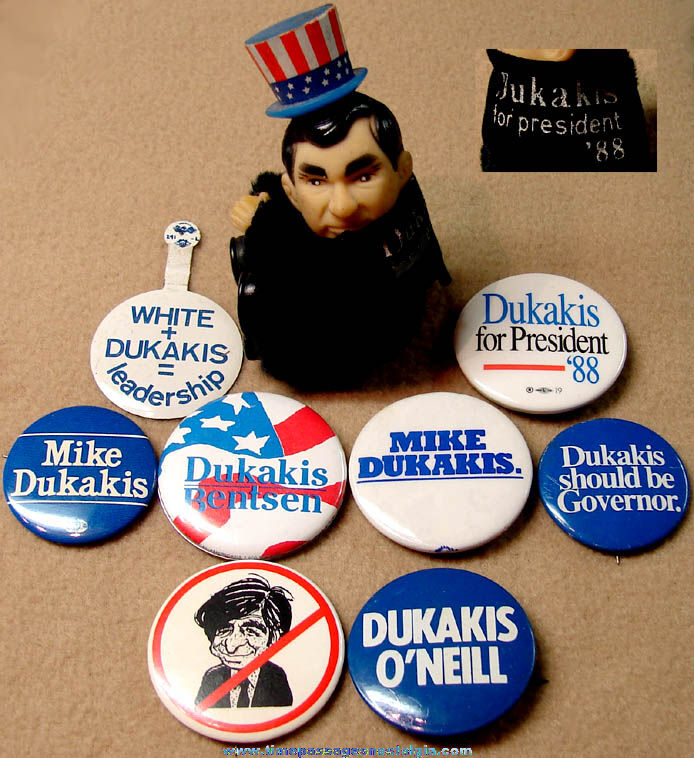