During her six decade career, her most prolific appearances in film came in the 1940s and 1950s and included her best known film roles, such as of Anna Marie in Salome Where She Danced (1945), Anna in Criss Cross (1949), Sephora the wife of Moses in The Ten Commandments (1956), starring Charlton Heston, and Amantha Starr in Band of Angels (1957) with Clark Gable. As her acting career faded away, De Carlo accepted to play Lily Munster for CBS television series The Munsters, alongside with Fred Gwynne and Al Lewis.

Other entertainment activities
Trained in opera and a former chorister at St Paul's Anglican Church, Vancouver, when she was a child, De Carlo possessed a powerful contralto voice and released an LP of standards called Yvonne De Carlo Sings in 1957. This album was orchestrated by the movie composer John Williams. She sang and played the harp on at least one episode of The Munsters.

From 1967 onward she became increasingly active in musicals, appearing in off broadway productions of Pal Joey and Catch Me If You Can. In early 1968 she joined Donald O'Connor in a 15 week run of Little Me staged between Lake Tahoe and Las Vegas, performing 2 shows per night. But her defining stage role came with her big break on Broadway in Stephen Sondheim's Follies, which ran from February 1971 until July 1, 1972. As ''Carlotta Campion'' she introduced the song ''I'm Still Here'', which would become an anthem of sorts. The show opened later in Los Angeles with the original Broadway cast on July 22, 1972, and closed 11 weeks later. She was the last lead female performer from the original production to die (having been predeceased by Alexis Smith, Dorothy Collins, Ethel Shutta, Mary McCarty , and Fifi D'Orsay). DeCarlo received recognition for her work in various B horror films and thrillers, such as The Power, The Seven Minutes, House of Shadows, Sorority House Murders, Cellar Dweller, The Man with Bogart's Face, Mirror, Mirror, Blazing Stewardesses, and American Gothic.

De Carlo circa 1979.
She also made a cameo appearance on The Late Show which was hosted by comedian Ross Shafer in 1988, to talk about her own autobiography, she'd written Yvonne: An Autobiography in 1987.

Last appearances
De Carlo's final appearance on the big screen was as Aunt Rosa in the 1991 Sylvester Stallone comedy Oscar, directed by John Landis. De Carlo also appeared on the talk show, Vicki, hosted by her lifelong fan, Vicki Lawrence, on a special episode Sitcom Legends, along with Dawn Wells, Jamie Farr, Dick Sargent, Donna Douglas and former co-star Butch Patrick in 1994. She had a small cameo role on the Munsters TV movie remake Here Come the Munsters in 1995. Her last TV movie appearance was as Norma, in the 1995 Disney remake of The Barefoot Executive, opposite Eddie Albert. Her last TV interview appearance was on January 20, 2002, in a segment of Larry King Live which also featured Richard Hack, author of Hughes: The Private Diaries, Memos and Letters. 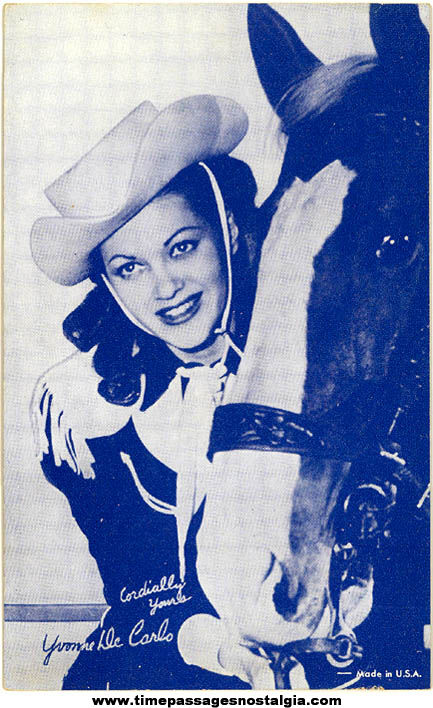