Marion Motley (June 5, 1920 - June 27, 1999) was a professional football player, a fullback for the Cleveland Browns, and briefly for the Pittsburgh Steelers.

Motley attended high school at Canton McKinley High School in Canton, Ohio, and played college football at South Carolina State and three seasons at Nevada. As a punishing fullback for the Wolf Pack, Motley played several games at San Francisco's Kezar Stadium against such power teams of the period from the Bay Area: USF, Santa Clara, and St. Mary's; at the time there were no major professional football teams on the West Coast.

During World War II, Motley joined the U.S. Navy, where he first played for Paul Brown with the Great Lakes Naval Training Station team. This team, full of fine players, notably defeated Notre Dame 39 - 7 in 1945. Motley planned on going back to college to get a degree, but then Paul Brown offered him a job with his new professional team. He started his pro football career in 1946, when the Cleveland Browns were part of the new AAFC.

Motley and the Browns won every championship in the four year existence of the AAFC, posting an overall 47 - 4 - 3 record, including an undefeated 15 - 0 season in 1948. Besides the New York Yankees and San Francisco 49ers, the other teams in the AAFC did not offer significant opposition to the Browns. In the 1946 AAFC championship game against New York, Motley rushed for 98 yards on 13 carries, including a touchdown, as the Browns prevailed 14 - 9. In the 1947 rematch, Motley rushed 33 times for 109 yards in the Browns' 14 - 3 win. In the 1948 championship game against the Buffalo Bills (who won the AAFC East title with a 7 - 7 record), Motley carried 14 times for 133 yards and three touchdowns, as the Browns romped 49 - 7. He wrapped up his AAFC career in the 1949 title game against San Francisco with 8 carries for 75 yards, including a 63 yard touchdown run in the Browns' 21 - 7 victory.

When the AAFC shut down after 1949, Motley was the league's career rushing leader at 3,024 yards. The Browns joined the NFL in 1950 and won the NFL title. That season Motley led the league in rushing with 810 yards on 140 carries (5.8 per rush), averaging less than a dozen carries per game. In October 1950, he set a league record that lasted over 52 years when he averaged over 17 yards per rush against the rival Steelers, with 188 yards on 11 carries. To qualify for that single game record, a player must have a minimum of 10 carries. In December 2002, quarterback Michael Vick of the Atlanta Falcons rushed for 173 yards on 10 carries against the Minnesota Vikings, eclipsing Motley's average by 0.21 yards per carry.

Motley was also an outstanding pass blocker and played linebacker on defense, which was uncommon at the time. During his last four seasons in professional football, he suffered from injuries and retired before the 1954 season. After a year off, he returned and played in 1955 with the Steelers, but retired again after a few games due to more injuries. After retiring, he scouted players for the Browns, and wanted to coach. At the time, racism frequently prevented minorities from obtaining coaching jobs and he was turned down on most offers.

In 1968, Motley was voted into the Pro Football Hall of Fame, located in his hometown of Canton, Ohio. The previous year, former safety Emlen Tunnell of the New York Giants was the first black player to achieve the honor, making Motley the second. In his books ''The Thinking Man's Guide to Pro Football'' and the revised edition ''The New Thinking Man's Guide To Pro Football'', the respected football writer Paul ''Dr. Z'' Zimmerman of Sports Illustrated has called Motley the best player in the history of football. He was named to the NFL's 75th Anniversary All Time Team in 1994.

Shortly after his death in 1999, Motley was ranked number 32 on The Sporting News' list of the 100 Greatest Football Players. Now most people can refer to him as ''The Jackie Robinson of football'', because he, along with three others, broke the color barrier in professional football in 1946. 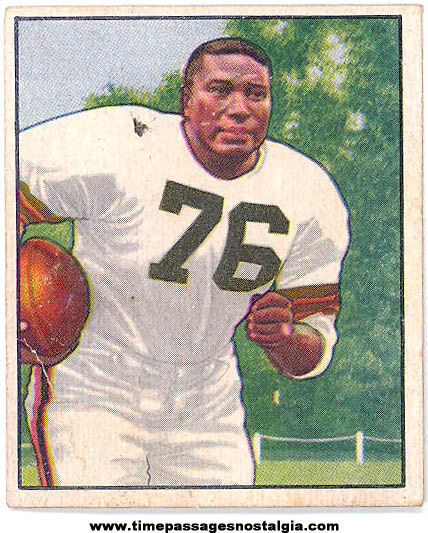 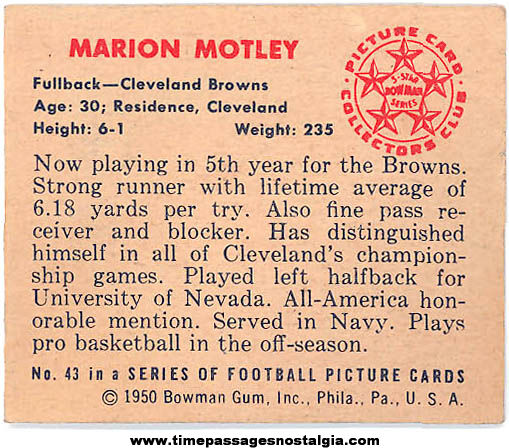