The Miller Brothers 101 Ranch was an 110,000 acre cattle ranch in the Indian Territory of Oklahoma before statehood. Located near modern day Ponca City, it was founded by Colonel George Washington Miller, a veteran of the Confederate Army, in 1893. The 101 Ranch was the birthplace of the 101 Ranch Wild West Show and one of the early focal points of the oil rush in northeastern Oklahoma. It was the largest diversified farm and ranch in America at the time. Bill Pickett's grave and the White Eagle Monument are located on the ranch grounds. The location of the former working cattle ranch was subdivided and all of its buildings destroyed. The location of the ranch is a National Historic Landmark.

In 1903, when Colonel George Miller died, his three sons, Joseph, George Jr., and Zack took over operation of the 110,000 acre ranch. By 1932 most of the land was owned by the Miller family. They leased other land from the Ponca, Pawnee, and Otoe Indians in Kay, Noble, Osage and Pawnee Counties. The ranch remained in the family for almost 60 years.

The Millers' neighbor Major Gordon W. Lillie, who performed as Pawnee Bill, motivated the Millers to produce a Wild West Show of their own. The Millers made their transition from putting on local shows to the national scene in 1907, when they performed at the Jamestown Exposition in Virginia. Later in 1907, the Miller Brothers 101 Ranch Wild West Show began the tour circuit in Brighton Beach, New York. Joe Miller, the eldest son, was an exceptional equestrian and star performer. Over the course of the show's history, it's cast included Bill Picket, Bessie Herberg, Bee Ho Gray, Tom Mix, Jack Hoxie, Mexican Joe, Ross Hettan, and an elderly Buffalo Bill.

The Miller brothers came late into Wild West Show business and suffered financially along with the other shows after the invention of motion pictures. Their show had more problems than most in a business that was harsh in the best of times. During their first year on the circuit, they suffered a serious railroad accident. Later several members of their cast contracted typhoid fever.

In 1908, when Buffalo Bill and Pawnee Bill combined their shows into an extravaganza that broke records at Madison Square Gardens in New York City, the Miller Brothers took their show abroad. In England, the British military confiscated most of the 101's horses, stagecoaches, and automobiles to build up for war, as tensions were building related to the pending World War I. When the Millers' show toured in Germany, authorities arrested some of their Oglala Sioux performers on suspicion of being Serbian spies, they were never seen again. A frantic Zack Miller managed to get the rest of cast out of Germany via Norway, and then to England. Once in London, however, he had difficulty finding a steamship that would sell his people passage. Finally, he obtained passage for his cast on an American ship. Once the cast returned to Oklahoma, the eldest brother Joe Miller refused to pay the Indian cast overtime. As a result, the entire Indian cast quit the show.

By 1916, the two younger Miller brothers abandoned trying to work with their volatile oldest brother. George Jr. and Zack worked at the ranch, while Joe schemed to make the Wild West Show a financial success. Joe Miller hired an out of work, aging, and ill Buffalo Bill to star in a World War I recruitment show called the ''Pageant of Preparedness''. Soon Cody quit the show; he died within a year. Still unwilling to let the show close, Joe continued to operate on a smaller scale. In 1927, Joe was unsuccessful in his attempts to sell his show to the American Circus Corporation.

Oil and Miller Brothers' decline
In 1908 the Millers entered into a leasing arrangement with E. W. Marland, who formed the 101 Ranch Oil Company. Oil was struck in 1911 at the ''Willie Cries for War'' well. Marland would become a millionaire and later a U.S. Congressman. He was eventually elected the governor of Oklahoma. The companyÕs 1911 oil discovery led to the founding of the Marland Oil Company, later renamed the Continental Oil Company, and then Conoco Phillips.

On October 21, 1927 a neighbor found Joe Miller dead in the 101 Ranch garage with his car running. The family physician ruled his death accidental. In 1929, George Miller, Jr., died in a car accident. Zack Miller tried to carry on alone, but in 1932, during the Great Depression, he filed for bankruptcy. The U.S. government seized the show's remaining assets and bought 8,000 acres of the 101 Ranch. Completely broke, the 101 Ranch show closed after the New York World's Fair in 1939. Zack Miller died of cancer in 1952.

National Historic Landmark
The ranch property was declared a National Historic Landmark in 1975. After Zack MillerÕs bankruptcy, the federal Farm Security Administration (FSA) divided the remaining ranch lands and sold off parcels to individuals. The 101 Ranch house and most other buildings were torn down. The 101 Ranch store remained standing until September 22, 1987, when it burned in a fire of unknown origins. Few of the 101 Ranch buildings are left standing today. In 1990, the Oklahoma Legislature designated State Highway 156 as the 101 Ranch Memorial Road. An historical marker is located on the highway about 13 miles southwest of Ponca City. 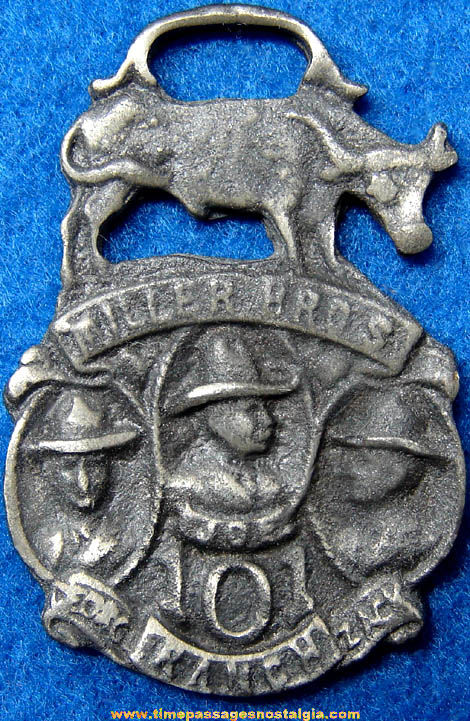