History
The cruise line was founded as Norwegian Caribbean Line in 1966 by Knut Kloster and Ted Arison, with the 8,666 ton, 140 m cruise ship / car ferry, Sunward, which in 1966 operated as a car ferry between Southampton UK and Gibraltar, for that one, short season only. Arison soon left to form Carnival Cruise Lines, while Kloster acquired additional ships for Caribbean service. Norwegian pioneered many firsts in the cruise industry, such as the first Out Island Cruise, the first combined air sea program (marketed as Cloud 9 Cruises), which combined low cost air fares with the cruise, and first ship line to develop new ports in the Caribbean, such as Ocho Rios in Jamaica. Like the original Sunward of 1966, Norwegianss second ship, the Starward, had the capability to carry automobiles through a well concealed stern door. Later, this area was turned into cabins and a two deck movie theater, later to be used as a casino. Norwegian was responsible for many of the cruise innovations that have now become standard throughout the industry.

Norwegian made headlines with the acquisition of the France in 1979, rebuilding the liner as a cruise ship and renaming her Norway. The conversion cost more than $100 million U.S. dollars. The Norway was at the time significantly larger than any existing cruise ship, and exploited the extra space available by adding a greater than usual variety of onboard entertainment. Her success paved the way for a new era of giant cruise ships. A boiler explosion in May 2003 forced Norwegian to withdraw the Norway from service, later being laid up in Bremerhaven, Germany, until 2005, when she was towed to Port Klang Malaysia with the claimed intent to use her as an anchored casino or slow overnight casino cruises on her remaining boilers. Instead, she was sold for scrap and renamed the S.S. Blue Lady and later beached at Alang, Gujarat, India, in August 2006 with claims that she had not been cleaned of toxic materials. On September 11, 2007, the India Supreme Court issued an order permitting her to be broken up at Alang, despite the presence of large amounts of hazardous asbestos remaining on board.

Norwegian has expanded to other parts of the world, including Alaska, Europe, Bermuda, and Hawaii. Between 1997 and 2001, the company also operated cruises out of Australia under the name Norwegian Capricorn Line. Norwegian acquired Orient Lines in 1998. After talks, Norwegian itself was acquired in 2000 by Star Cruises, a subsidiary of Genting Hong Kong, part of the Malaysia based Genting Group. In 2007, Star Cruises sold Orient Lines Marco Polo to Transocean Tours, and Orient Lines ceased operations in early 2008.

In 2002, Norwegian purchased the half complete hull of the first Project America ship, at the time under construction at Ingalls Shipbuilding in Pascagoula, Mississippi, U.S., which was towed to Germany to be completed at the Lloyd Werft shipyard. Subsequently, Norwegian acquired the rights to move two ships built entirely outside the United States under the U.S. flag, making it possible to start a U.S. flagged operation under the brand name NCL America. In 2003, the company announced the purchase of the American flagged liners S.S. United States and S.S. Independence. In their July 2007 fiscal report, Norwegian noted the sale of the Independence, renamed SS Oceanic some time before. On July 1, 2010, the SS United States Conservancy struck a deal to buy the S.S. United States for $3 million. On February 1, 2011, the ownership was officially transferred to the S.S. United States Conservancy. In August 2007, Star Cruises sold 50% of Norwegian for $1 billion to U.S. based Apollo Management to strengthen Norwegians financial position.

The purchase price was roughly $260 million, financing being provided by the seller. On October 17, 2012, Meyer Werft and Norwegian reached a second agreement for the construction of two new vessels, slated for delivery in October 2015 and 2017, respectively. The project was under the code name Breakaway Plus Class, with the vessels expected to be 163,000 gross tons and hold 4,200 passengers. The Norwegian Escape entered service in November 2015 and weighs 164,600 tons. Two more vessels were ordered on July 14, 2014, and they will enter service in 2018 and 2019 and will be slightly bigger at 164,000 GT.

On 11 March 2014, Norwegian announced that it was cancelling all future port calls in Tunisia following an incident wherein the country forbade Israeli nationals from disembarking.

In December 2016, Norwegian Cruise Line announced it had reached an agreement with the Cuban government. In May 2017, the Norwegian Sky was the first Norwegian vessel to ever visit Cuba. The Norwegian Sky makes weekly trips from Miami to Havana, making Norwegian the only line sailing that route weekly.

On May 2, 2017, Norwegian Cruise Line announced a new PortMiami Terminal. The construction began on May 1, 2018, and is scheduled for completion by fall 2019. Between 2022 and 2025, Fincantieri will deliver four ships and in July 2018, the company announced an order for two more Project Leonardo ships. They are expected to enter service in 2026 and 2027. In December 2018, Norwegian revealed plans to build a new pier in Alaskas Icy Strait Point.

Fleet
As of December 2019, Norwegian Cruise Line operates 17 cruise ships, with six on order. It has also previously owned or operated 19 other ships. All its ships are flagged to the Bahamas, except for the Pride of America, which operates cruises within the United States and is flagged and registered in the U.S., as well as being owned by a U.S. registered subsidiary, NCL America. 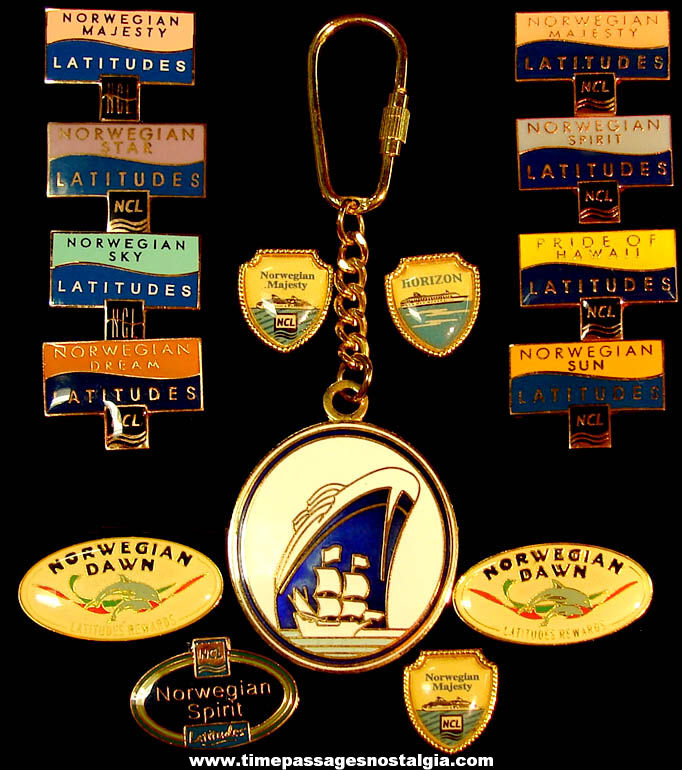