A new medium was brought to the campaign: televised presidential debates. In the first of four such debates, Nixon was recovering from illness and, wearing little makeup, looked wan and uncomfortable, in contrast to the composed Kennedy. Nixon's performance in the debate was perceived to be mediocre in the visual medium of television, though many people listening on the radio thought he won.

That November, Nixon lost the 1960 election narrowly. The final count recorded that he lost by 120,000 votes, or 0.2%. There were charges of vote fraud in Texas and Illinois; Nixon supporters unsuccessfully challenged results in both states as well as nine others. The Kennedy campaign successfully challenged Nixon's victory in Hawaii; after all the court battles and recounts were done, Kennedy had a greater number of electoral votes than he held after Election Day. Nixon halted further investigations to avoid a Constitutional crisis. Nixon and Kennedy later met in Key Biscayne, Florida, where Kennedy offered Nixon a job in his administration, an offer which Nixon declined.

Death and funeral of Richard Nixon
Nixon suffered a severe stroke at 5:45 p.m. EDT on April 18, 1994, while preparing to eat dinner in his Park Ridge, New Jersey home. It was determined that a blood clot resulting from his heart condition had formed in his upper heart, then broken off and traveled to his brain. He was taken to New York Hospital Cornell Medical Center in Manhattan, initially alert, but unable to speak or to move his right arm or leg. Damage to the brain caused swelling (cerebral edema) and Nixon slipped into a deep coma. On April 22, 1994, he died at 9:08 p.m., with his daughters at his bedside; he was 81.

Nixon's funeral took place on April 27, 1994, the first for an American president since that of Lyndon B. Johnson in 1973, which Nixon had presided over as President. Speakers at the service, held at the Nixon Library, included then President Bill Clinton, former Secretary of State Henry Kissinger, Senate Minority Leader Bob Dole, California Governor Pete Wilson, and the Reverend Billy Graham. Also in attendance were former Presidents Gerald Ford, Jimmy Carter, Ronald Reagan, George H. W. Bush, and their respective first ladies. Nixon was buried beside Pat on the grounds of the Nixon Library. He was survived by his two daughters, Tricia and Julie, and four grandchildren. In keeping with his wishes, his funeral was not a state funeral, though his body did lie in repose in the Nixon Library lobby prior to the funeral services.

Henry Cabot Lodge, Jr. (July 5, 1902 - February 27, 1985) was a Republican United States Senator from Massachusetts and a U.S. Ambassador to the United Nations, Vietnam and the Vatican (as Representative). He was the Republican nominee for Vice President in the 1960 Presidential election.

The 1960 Vice Presidential campaign
Lodge left the ambassadorship during the election of 1960 to run for Vice President on the Republican ticket headed by Richard Nixon. The duo lost the election to Lodge's old foe, Kennedy, in a razor thin vote. Nixon chose Lodge as his running mate in the hope that Lodge's presence on the ticket would force Kennedy to divert time and resources to securing his Massachusetts base, but Kennedy won his home state handily. Nixon also felt that the name Lodge had made for himself in the United Nations as a foreign policy expert would prove useful against the relatively inexperienced Kennedy. The choice of Lodge proved to be controversial, as some conservative Republicans charged that Lodge had cost the ticket votes, particularly in the South, by his pledge (made without Nixon's approval) that as President, Nixon would name at least one African American to a cabinet post. Between 1961 and 1962 he was the 1st Director General of the Atlantic Institute (full name - Atlantic Institute for International Affairs).

Henry Cabot Lodge, Jr. died in 1985 and was interred in the Mount Auburn Cemetery in Cambridge, Massachusetts.

The United States Presidential Election of 1960 marked the end of Dwight D. Eisenhower's two terms as President. Eisenhower's Vice President, Richard Nixon, who had transformed his office into a national political base, was the Republican candidate.

The Democrats nominated Massachusetts Senator John F. Kennedy (JFK). He would become the first Roman Catholic to be elected President, and he remains the only Roman Catholic to be elected to the Presidency. The electoral vote was the closest in any presidential election dating to 1916, and Kennedy's margin of victory in the popular vote is among the closest ever in American history. The 1960 election also remains a source of debate among some historians as to whether vote theft in selected states aided Kennedy's victory. 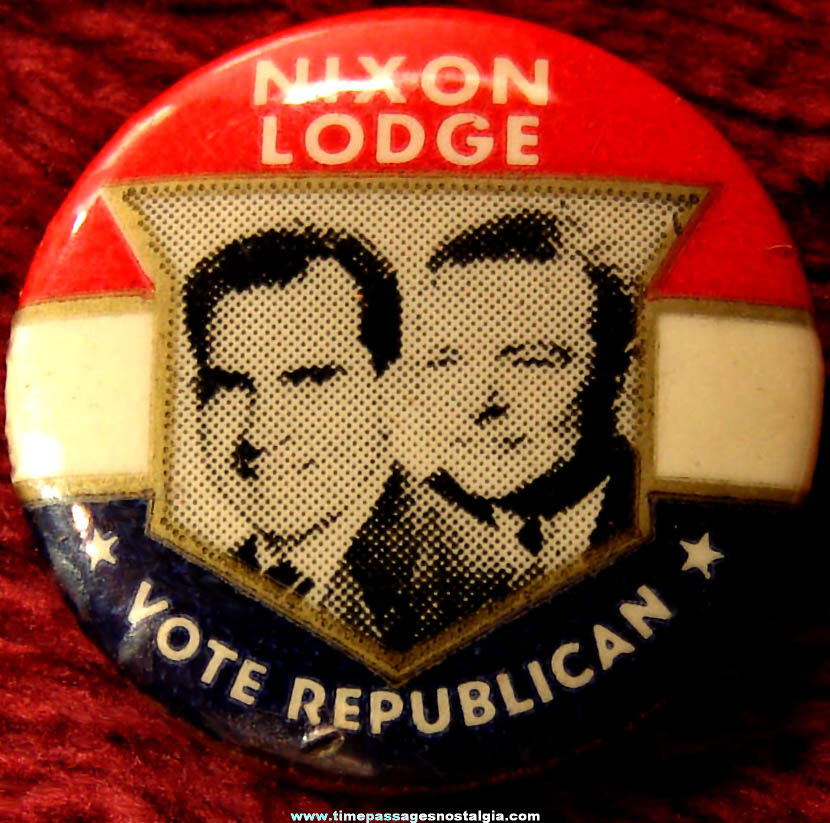