The S.S. Pasteur was a turbine steam ship built for Compagnie de Navigation Sud-Atlantique. She later sailed as the Bremen for Norddeutscher Lloyds. Over the course of her career, she sailed for 41 years under four names and six countries' management.

In 1936, the French shipping company Compagnie de Navigation Sud-Atlantique planned to build a new liner as passenger and freight transport ship for South Atlantic routes, which with Cap Arcona from the shipping company Hamburg South America Line. The construction began in 1938 at Chantiers de l'Atlantique, St. Nazaire in France. In 15 February 1938, she was christened after the scientist Louis Pasteur on the names Pasteur. A fire in March 1939 delayed her completion. So, she had to be launched in August 1939, one month before the World War II broke out.

The Pasteur was 29,253 gross tons. She was 212.4 m long and 26.8 m wide. She had 11 deck and possessed extensive loading spaces. She was designed to carry 751 passengers. She could reach around 50,000 HP and up to 26 Knots run, however generally, her service speed was around 22 knots. Her depth was 93 m. She had four propellers. She was the third fastest ship of her time. Although she was sometimes referred to as an S.S. (Steamship), she really was a TSS or TS (Turbine Steam Ship) like the S.S. Michelangelo.

Only the journey of the Pasteur could already be written off by the beginning The Second World War do not take place. The ship laid up in St. Nazaire in Brest, France. In 1940, she was commissioned to carry 200 tons of gold reserves from Brest, France to Halifax, Nova Scotia, Canada in a voyage that should be her maiden voyage at first, because her maiden voyage from Bordeaux to Buenos Aires was canceled due to the outbreak of World War II. After the defeat of France, she was taken over by Great Britain and placed under Cunard - White Star management. She was used as troop transporter and military hospital ship between Canada, South Africa, Australia and South America, and was transported thereby around 300,000 soldiers. She was sometimes called HMTS Pasteur.

Due to her speed, as a troop transporter, the Pasteur normally made her crossings alone, not as a member of a convoy (without a warship escort). She made a voyage from Glasgow to Halifax with a various complement, including officers arranging the 20,000 British troops' transport across Canada and the Pacific to Singapore in October, 1941. The Pasteur apparently returned loaded with German prisoners and carried them to prisoners of war camps, which located in North America. In addition, carrying as many as 2,000 German prisoners of war, she transported prisoners from Suez, Egypt to South Africa. She visited Freetown, Cape Town, Durban, Aden and Port Tewfik, and then back to the Clyde and Halifax in 1943. She had carried British 8th Army Corps's 10,000 men; army, the U.S. 1st Army Corps's and 5,000 men before the battle of Alamein. Together, she had carried 220,000 troops, and 30,000 wounded, and traveled 370,669 miles during the war.

After the war, she repatriated U.S. and Canadian troops and returned to her owners in October 1945. And management was returned to Cie Sudatlantique in early 1946. To the return at France, she remained in military starting from 1946 in French services as troop transporter to Vietnam (Vietnam War) and from 1954 to 1957 between Algeria. She was awarded the French's highest honor, Croix de guerre, however, for her owner, she never made a crossing as a passenger ship but only one voyage bringing 4,000 Dutch troops from Indonesia to The Netherlands in February 1950.

She was laid up at Toulon in 1956 and then at Brest in 1957. During the Suez Canal affair, the ship was activated again in September 1956 along with other passenger and military ship to be a troop transporter. While she was fastened in Port Said harbor in December 1956, the HQ General of the French troops was on board the Pasteur. At the end of the affair, Pasteur was one of the last Allied ships to leave Port Said in Egypt. She was sold to North German Lloyd for 30 million DM in September 1957. The sales released violent protests with the French population. The transfer took place in September 1957 from Brest to Bremerhaven. The Lloyd left her on the Bremer Vulkan of Bremen for further approximately 65 million DM changes and she used Bremen under the name in the North Atlantic service. On July 9 1959, she was placed on the Bremerhaven-Southampton-Cherbourg-New York route. She was considered as one of the most beautiful passenger liners of her time.

After she was acquired by North German Lloyd and renamed TS Bremen in 1957, she was refitted comprehensively at Bremer Vulkan in Bremen. Her size was increased to 32,336 GRT and the load carrying capacity with 8,700 tdw. She received new boilers and four turbines with a maximum output of 60,000 HP rendering a maximum speed of 26 knots. Economical output of 53,500 HP gave a very useful speed of 23 knots. Three 1,375 KVA generators had an output of 6,600 kilowatt. One very noticeable change was the new drop shaped funnel, which was much more in proportion with the ship than the original tall funnel. To enhance comfort, two 4,50 m Stabilizers were fitted. In June 1959, she underwent new sea trials.

In 1960, Bremen could carry approximately 14,000 passengers from Europe to the U.S.A. and likewise many guests into the opposite direction. Besides Bremen was used starting from 1960 and also in cruise traffic in the Karibik and to South America. Also 1961 were very good their extent of utilization with 85%. In 1971, she was transferred to cruising since the air travel became more popular. In 1970, NDL merged with Hamburg America Line to form the large shipping company, Hapag Lloyd. The bulbous bow was added after she had another refit in 1965 - 1966 at the repair yard of North German Lloyd. In September 1971, she made her final voyage from Bremen to New York for Hapag - Lloyd. In October 1971, Bremen was sold to Greek shipping company Chandris Cruises after 175 Atlantic crossings and 117 cruises for 40 million DM, which was accomplished on January, 1972.

Other services and fate

After another refit, which changed her tonnage to 23,801 tons, she was placed on cruising service in the Mediterranean and in Piraeus as Regina Magna. Until 1974, she had cruised around the world, which she was once again she was laid up in Piraeus, Greece because of rising fuel costs and the loss of emigration charters to Australia.

Sinking of the Filipinas Saudi I

She was sold to Philippine Singapore Ports Corporation of Saudi Arabia and renamed Saudiphil I in 1977. For Philippine workers, the ship was used as an accommodation ship. In November 1, 1977, She arrived at Jeddah and served as a floating hotel. In 1980, apparently, she was sold to the Philsimport International in Hong Kong and renamed Filipinas Saudi I. She rolled over onto her port side and sank stern first in Indian Ocean in the same year while being towed to the Taiwanese ship breaker in Kaohsiung, Taiwan by Panamanian tug Sumatra.

TS Bremen had a crew of 545 persons, three thousand of them was active in the service range. Approximately 1,150 passengers could be transported, 216 in first Class.

The Captains of Bremen: 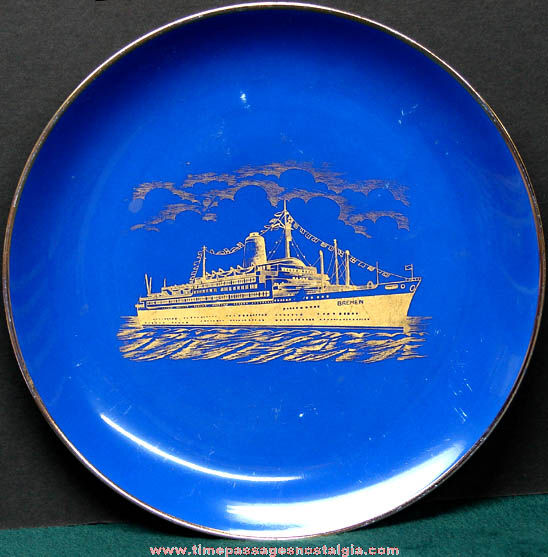