Lourdes (Gascon Occitan Lorda or Lourde) is a commune in the Hautes-Pyrnes department in the Midi-Pyrnes region in south western France. The former regional language of this area used to be Gascon Occitan (or Gasconha, Occitnia which was the spoken language at the time of Saint Bernadette Soubirous), but has been largely supplanted by French as in many regions of France.

Lourdes is a small market town lying in the foothills of the Pyrenees, famous for the Marian apparitions of Our Lady of Lourdes said to have occurred in 1858 to Bernadette Soubirous. At that time, the most prominent feature of the town was the fortified castle that rises up from a rocky escarpment at its centre.

Pilgrimages
The Blessed Virgin Mary is said to have appeared to Bernadette Soubirous on a total of eighteen occasions at Lourdes. Lourdes has become a major place of Roman Catholic pilgrimage and of miraculous healings. The 150th Jubilee of the first apparition took place on 11 February 2008 with an outdoor Mass attended by approximately 45,000 pilgrims.

Today Lourdes has a population of around 15,000, but it is able to take in some 5,000,000 pilgrims and tourists every season. With about 270 hotels, Lourdes has the second greatest number of hotels per square kilometre in France after Paris. Some of the deluxe hotels like Grand Hotel Moderne, Hotel Grand de la Grotte, Hotel St. Etienne, Hotel Majestic and Hotel Roissy are located here.

Geography
Lourdes is located in southern France in the foothills of the Pyrenees mountains near the prime meridian. It is overlooked from the south by the Pyrenean peaks of Aneto, Montaigu, and Vignemale (3,298 m), while around the town there are three summits reaching up to 1,000Êm (3,280.84 ft) which are known as the Bout, the Petit Jer (with its three crosses) and the Grand Jer (with its single cross) which overlook the town. The Grand Jer is accessible via the funicular railway of the Pic du Jer. The Bout was once accessible by cable car, although this has fallen into disrepair. A pavilion is still visible on the summit.

Lourdes lies at an elevation of 420 m (1,380 ft) and in a central position through which runs the fast-flowing river Gave de Pau from the south coming from its source at Gavarnie, into which flow several smaller rivers from Barges and Cauterets. The Gave then branches off to the west towards the Barn, running past the banks of the Grotto and on upstream to Pau and then Biarritz. On land bordered by a loop of the Gave de Pau is an outcrop of rock called Massabielle (from masse vieille: ''old mass''). On the northern aspect of this rock, near the riverbank, is a naturally occurring, irregularly shaped shallow cave or grotto, in which the apparitions of 1858 took place.

History
During the 8th century, Lourdes and its fortress became the focus of skirmishes between Mirat, the local leader, and Charlemagne, King of the Franks. Charlemagne had been laying siege to Mirat in the fortress for some time, but the Moor had so far refused to surrender. According to legend, an eagle unexpectedly appeared and dropped an enormous trout at the feet of Mirat. It was seen as such a bad omen that Mirat was persuaded to surrender to the Queen of the sky by the local bishop. He visited the Black Virgin of Puy to offer gifts, so he could make sure this was the best course of action and, astounded by its exceptional beauty, he decided to surrender the fort and converted to Christianity. On the day of his baptism, Mirat took on the name of Lorus, which was given to the town, now known as Lourdes.

After being the residency of the Bigorre counts, Lourdes was given to England by the Brtigny Treaty which bought a temporary peace to France during the course of the Hundred Years War with the result that the French lost the town to the English, from 1360. In 1405, Charles VI laid siege to the castle during the course of the Hundred Years War and eventually captured the town from the English following the 18-month siege. Later, during the late 16th century, France was ravaged by the Wars of Religion between the Roman Catholics and the Huguenots. In 1569, Count Gabriel de Montgomery attacked the nearby town of Tarbes when Queen Jeanne dÕAlbret of Navarre established Protestantism there. The town was overrun, in 1592, by forces of the Catholic League and the Catholic faith was re-established in the area. In 1607, Lourdes finally became part of the Kingdom of France.

The castle became a jail under Louis XV but, in 1789, the General Estates Assembly ordered the liberation of prisoners. Following the rise of Napoleon in 1803, he again made the Castle an Estate jail. Towards the end of the Peninsular War between France, Spain, Portugal, and Britain in 1814, British and Allied forces, under the Duke of Wellington, entered France and took control of the region and followed Marshall Soult's army, defeating the French near the adjoining town of Tarbes before the final battle took place outside Toulouse on 10 April 1814 brought the war to an end.

Up until 1858, Lourdes was a quiet, modest, county town with a population of only some 4,000 inhabitants. The castle was occupied by an infantry garrison. The town was a place people passed through on their way to the waters at Barges, Cauterets, Luz-Saint-Sauveur and Bagnres-de-Bigorre, and for the first mountaineers on their way to Gavarnie, when the events which were to change its history took place.

On 11 February 1858, a 14 year old local girl, Bernadette Soubirous, claimed a beautiful lady appeared to her in the remote Grotto of Massabielle. This lady later identified herself as ''the Immaculate Conception'' and the faithful believe her to be the Blessed Virgin Mary. The lady appeared 18 times, and by 1859 thousands of pilgrims were visiting Lourdes. A statue of Our Lady of Lourdes was erected at the site in 1864. See Our Lady of Lourdes for more details on the apparitions.

Since the apparitions, Lourdes has become one of the world's leading Catholic Marian shrines and the number of visitors grows each year. It has such an important place within the Roman Catholic church, that Pope John Paul II visited the shrine twice: on 15 August 1983, and 14-15 August 2004. In 2007, Pope Benedict XVI authorized special indulgences to mark the 150th anniversary of Our Lady of Lourdes.

Sanctuary of Lourdes
Yearly from March to October the Sanctuary of Our Lady of Lourdes is a place of mass pilgrimage from Europe and other parts of the world. The spring water from the grotto is believed by some to possess healing properties.

An estimated 200 million people have visited the shrine since 1860, and the Roman Catholic Church has officially recognised 69 healings considered miraculous. Cures are examined using Church criteria for authenticity and authentic miracle healing with no physical or psychological basis other than the healing power of the water.

Tours from all over the world are organized to visit the Sanctuary. Connected with this pilgrimage is often the consumption of or bathing in the Lourdes water which wells out of the Grotto.

At the time of the apparitions the grotto was on common land which was used by the villagers variously for pasturing animals, collecting firewood and as a garbage dump, and it possessed a reputation for being an unpleasant place.

Ukrainian Church
The five domed St. Mary's Ukrainian Catholic Church in Lourdes was designed by Myroslav Nimciv, while its Byzantine interior polychrome decorations were executed by artist Jerzy Nowosielski. The church is about a 10 minute walk from the basilica and the grotto, on a street named in honour of Ukraine, 8 Rue de l'Ukraine, situated on a narrow piece of property close to the railroad station. Visible from the basilica, the height of the building makes up for its breadth. 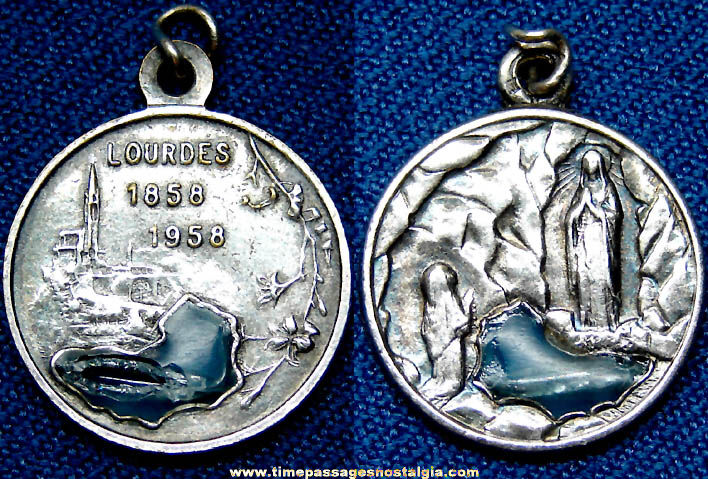