Roy Hilton White (born December 27, 1943 in Los Angeles, California) is a former American professional baseball player and coach. He played his entire career in Major League Baseball as an outfielder for the New York Yankees between 1965 and 1979. White, a switch hitter, was named to two All Star teams in 1969 and in 1970. In 1971, he set an American League record for most sacrifice flies in a season with 17. White led the American League in walks in 1972 and in runs in 1976. He played on two World Series champions, in 1977 and 1978 and a third American League pennant winner in 1976.

In a 15 year major league career, White played in 1,881 games, accumulating 1,803 hits in 6,650 at bats for a .271 career batting average along with 160 home runs, 758 runs batted in and a .360 on base percentage. He ended his career with a .988 fielding percentage. An excellent defensive player, White led American League left fielders in fielding percentage for four consecutive years between 1968 and 1971.

After retiring from the major leagues in 1979, he spent three seasons playing in Japan for the Tokyo Giants. He served as a Yankee coach for three seasons in the mid 1980s before returning to the coaching staff at the start of 2004. He also spent time as the minor league hitting coach for the Oakland A's.

Recently, he established The Roy White Foundation, a charity aimed to help children and young adults in the New York area who would like to attend college, but do not have the financial resources to do so.

White, who is African American, resurfaced in a 2011 interview for UniWatch about his time with the Yankees Double A during the mid 1960's, the Columbus Confederate Yankees, since the team had a patch of the Confederate flag on the team's uniforms at the height of the civil rights movement. White himself commented that he didn't notice the patch at the time nor paid attention to its symbolism, having to deal with actual racism in the Southern United States at the time. 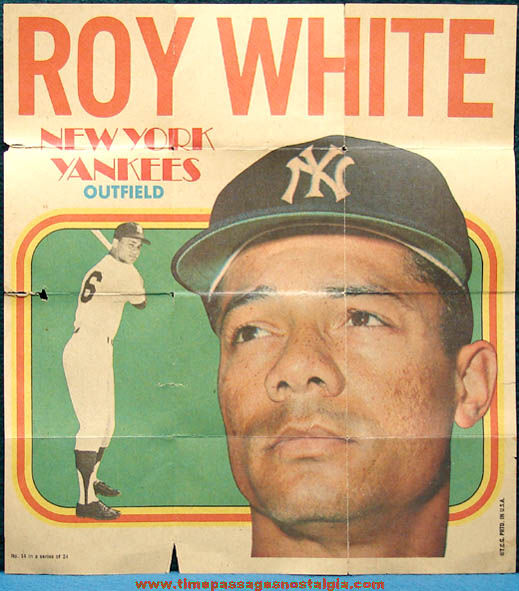