Juicy Fruit is a brand of chewing gum made by the Wm. Wrigley Jr. Company, a U.S. company that since 2008 has been a subsidiary of the privately held Mars, Incorporated. It was introduced in 1893, and in the 21st century the brand name is recognized by 99% of Americans, with total sales in 2002 of 153 million units. It is also known for being the first ever product bought using a barcode scanner.

Which fruit serves as the model for its flavor is kept vague in advertising, though in 2003 BBDO characterized it as a combination of pineapple and peach. According to two books in the Imponderables series, banana is one crucial flavor among many others. It is likely that the chemical used for flavoring is Isoamyl acetate, a carboxylic ester. Each stick of gum weighs 3 grams (0.11Êoz) and contains 10 calories.

The average age of the typical Juicy Fruit consumer is under 20, with 3 to 11 year olds making up the heart of the business; those 20 years old and over account for 40 percent of the purchases.

When the brand first entered the market, it was packaged simply, with a plain wrapper and ''JUICY FRUIT'' in red, thin block letters In 1914, Wrigley changed it to thin vertical white and green stripes with ''Wrigley's Juicy Fruit Chewing Gum'' centered in a stylized Maltese Cross emblem with a black background.

Juicy Fruit was taken off the civilian market temporarily during World War II because of ingredient shortages and the demand for the gum to be included in C rations. When the gum was re-introduced to the general public after World War II ended, the striped packaging was replaced by one with a bright yellow background and ''Juicy Fruit'' bracketed between two stylized chevrons, the latter a motif meant to echo the ''Wrigley arrow'' element used for Wrigley's Spearmint since 1893. The bright yellow background remained into the 21st century, with variations since 2002 turning the arrowhead like chevrons into the corners of an elongated smile under the brand name. Juicy Fruit is still widely popular today. 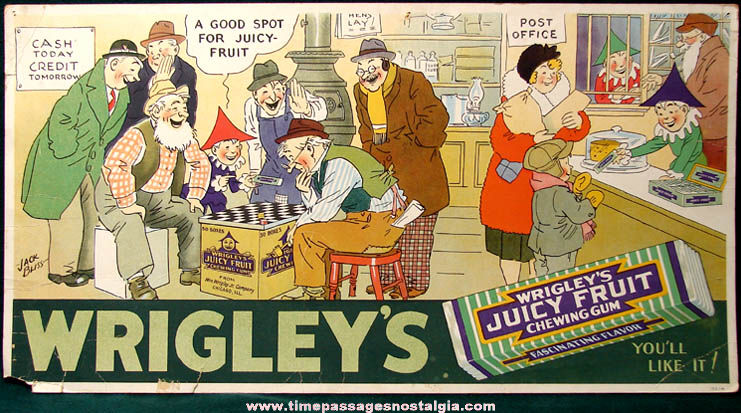