The slides each measure 2'' x 2''. They are in excellent condition as pictured. Below here is some additional information and an article about Sam Snead that was found online:

Only old age could stop Snead
By Bob Carter
Special to ESPN.com

Success in his golfing prime made Sam Snead a star. Longevity helped to build a legend. Snead's fluid but powerful swing seemed effortless, a classic swing that kept him on course well into his 60s. Leaning on his natural ability, Snead didn't practice as much as his peers and didn't tinker much with his form. Sam Snead's sweet swing and folksy manner made him a fan favorite. "I figured early that the best swing was a one-piece swing that let you get rid of all the hitches, the things that throw you off," he said.

He played golf at an elite level longer than anyone. He won the most PGA Tour events, 81, and he said he won 165 professional events in total, including regional tournaments. He won seven majors and appeared in seven Ryder Cups. Slammin' Sammy became the PGA Tour's oldest titlist when, at 52 years and 10 months, he won the 1965 Greater Greensboro Open. In 1979, his last season on tour, he became the first PGA player to shoot his age with a 67 in the Quad Cities Open and capped that weekend with a 66. He was around long enough to help get two U.S. tours rolling, the PGA and the PGA Seniors.

The only smudge on his record was the U.S. Open, the one major he didn't win. Snead was runner-up at the Open four times between 1937 and 1949, near-misses that hurt his image. "Sure, it bugs me that they make such a big deal of it because I never won the U.S. Open," he said, "but I must have been playing pretty good and sinking putts when I won those three Masters, three PGAs and the British Open."

Snead was born on May 27, 1912, in the rural mountains of Hot Springs, Va. He grew up in a poor farming family, hunting and fishing and dreaming of becoming a football star. He caddied at the local resort to help his family, and began playing golf with his older brother, Homer. A back injury ended his football days, putting him in line to pursue a golf career. He switched resorts in his early 20s, going from the Cascades in Hot Springs to the Greenbrier in White Sulphur Springs, W. Va., where he became a club pro. Snead played mostly local and regional tournaments in 1936, winning the West Virginia Closed Pro and placing fifth in a PGA Tour event in Hershey, Pa..

The next year, he went to the West Coast to play the tour full-time. In his second California tournament, the Oakland Open, Snead came from third place on the final day to gain his first PGA Tour victory. Days later, when he saw his picture in a New York newspaper, he asked tour manager Fred Corcoran, "How could they get a picture of me in New York? I ain't ever been there." Snead later suggested that he was merely kidding, but the line got plenty of publicity and enhanced his hillbilly reputation.

He also was known for being a penny-pincher, a trait perhaps rising from his skepticism over the tour's viability. Snead, though, helped solidify the pro game, winning fans with his sweet swing, long drives and country charm. Snead, Byron Nelson and Ben Hogan -- all born the same year -- formed the era's Big Three of golf, but it was Snead's style and accessibility that catapulted the pro circuit. Nelson said that Snead disproved the notion that you couldn't hit the ball both hard and straight. "He had great rhythm and about the best turn of anybody," Nelson said. Golf writer Bill Fields said Snead's swing "used to resemble a Faulkner sentence. It was long, laced with the perfect pause and blessed with a powerful ending."

Snead won five tournaments in 1937 and at least two each season through 1946. He won big events and small. "I don't give a damn what tournament it is," he said. "If you're going to play it, you want to win it." His first major came in 1942, the PGA, and he took that event again in 1949 and 1951. Snead never participated in the British Open until 1946 when he was forced to play at St. Andrews because of contractual ties to a sponsor. He won the championship and the $600 first prize, but went through four caddies and $2,000 in expenses.

At age 36, he won his first Masters in 1949, shooting five-under-par 67s in the final two rounds to win by three strokes. He also earned green jackets in 1952 and 1954, the latter after a classic 18-hole playoff duel with Hogan that he won by a stroke. "I can remember that Masters," Snead said 40 years later. "I can put the flags in every green. I can tell you what Hogan had on each hole, how many putts he had on each hole, how many greens he missed and how many greens he hit. I beat him on the par-5s."

In 1949, he won six titles, including two majors, and was the Player of the Year. The next season, he took 11 events and had a 69.23 stroke average through 96 consecutive rounds, a tour record. But Hogan, rebounding from a life-threatening car accident, won the U.S. Open and was voted Player of the Year in 1950, an award that rankled his rival. "They could have given him a six-foot-high trophy that said 'Great Comeback,' " said Snead, who enjoyed competing against Hogan.

Snead encountered mostly tough luck at the U.S. Open. He had several good opportunities to win, most notably in a 1947 playoff with Lew Worsham when he led by two strokes with three holes left. A missed 30-inch putt on the 18th hole gave the title to Worsham by a stroke.

In 1939, he lost to Nelson when a miscalculation cost him. Snead thought he needed a birdie to win -- a par would have done it -- and ended up with a triple bogey. "I should have won the Open," he said. "If I shoot one 69 in the last round, I'd have won seven of them." Later in his career, Snead lost confidence with his short putting and adopted an unorthodox, croquet-style pendulum stroke. That innovation was banished by a tour rule prohibiting anyone from straddling the putting line, so Snead went sidesaddle with it and found success.

Said Slammin' Sammy: "I won a lot of tournaments because I was in better shape than other guys. I didn't smoke and didn't drink and went to bed at reasonable hours. I've never been drunk in my whole life." Many modern golfers fascinate him, particularly the long-hitting John Daly, but he won't rate them higher than the players of his time. "The scores are a little better now," he said, "but the greens and fairways are so much better now and the equipment has improved." Snead paired with Gardner Dickinson to win the first Legends of Golf in 1978, the only event he was still playing two decades later. As the years pass, Snead spends more time fishing and hunting, and because of deteriorating eyes, less time playing golf. 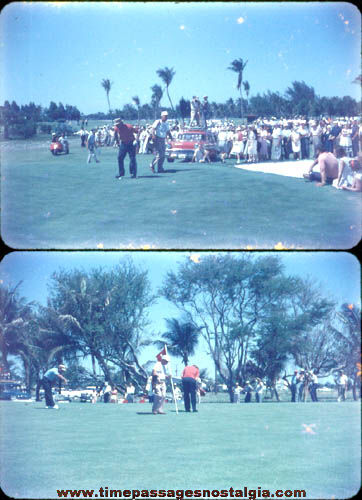