A chocolate chip cookie is a drop cookie that originated in the United States and features chocolate chips as its distinguishing ingredient. The traditional recipe combines a dough composed of butter and both brown and white sugar with semi sweet chocolate chips. Variations include recipes with other types of chocolate or additional ingredients, such as nuts or oatmeal.

Conflicting stories
There are conflicting stories about the origin of the acquisition of the recipe by Nestl. The commonality between the two stories is that the chocolate chip cookie was accidentally developed by Ruth Wakefield in 1934. Mrs. Wakefield owned the Toll House Inn, in Whitman, Massachusetts, a very popular restaurant in the 1930s. The restaurant's popularity was not just due to its home cooked style meals; Mrs. Wakefield's policy was to give diners a whole extra helping of their entres to take home with them and a serving of her homemade cookies for dessert. Mrs. Wakefield's cookbook, Toll House Tried and True Recipes, was published in 1936 by M. Barrows & Company, New York. Included is the recipe for the Toll House Cookie, originally called the Toll House Chocolate Crunch Cookie.

Nestl version
Mrs. Wakefield was making chocolate cookies but ran out of regular baker's chocolate, so she substituted it with broken pieces of semi sweet chocolate from Andrew Nestl, thinking that it would melt and mix into the batter. It clearly did not, and the chocolate chip cookie was born. Wakefield sold the recipe to Nestl in exchange for a lifetime supply of chocolate chips. Every bag of Nestl chocolate chips in North America has a variation of her original recipe printed on the back (butter and margarine are now both included as variants).

During World War II, GIs from Massachusetts who were stationed overseas shared the cookies they received in care packages from back home with soldiers from other parts of the United States soon, hundreds of GIs were writing home asking their families to send them some Toll House Cookies, and Mrs. Wakefield was soon inundated with letters from around the country asking for her recipe. Thus, began the nation wide craze for the chocolate chip cookie.

Toll House Inn version
Mrs. Carol Cavanagh, of Brockton, Massachusetts and a former employee of the Inn, and her father, George Boucher of South Dennis, Massachusetts, and the former head chef at the Toll House Inn during the years of its operation, offer a different history of the cookie. Contradicting Nestl's claim that Mrs. Wakefield put chunks of chocolate into cookie dough hoping they would melt, Mrs. Cavanagh states that Mrs. Wakefield was already an accomplished chef and author of a cookbook, and knew enough about the properties of chocolate that it would not melt and mix into the batter while baking. Mr. Boucher states that Mrs. Wakefield was known for her sugar cookies, which came free with every meal, and were for sale in the inn's lobby. One day, while mixing a batch of the sugar cookie dough, the vibrations from a large Hobart electric mixer caused bars of Nestl's chocolate stored on the shelf above the mixer to fall into the mixing bowl, where it was broken up and incorporated into the dough. Mrs. Wakefield believed the dough was ruined and was about to discard it, when Mr. Boucher stopped her and talked her into saving the batch. His reasoning was out of frugality rather than a prediction of the cookie's future popularity.

Mrs. Cavanagh states that Mrs. Wakefield did not sell the ownership of the recipe to Nestl, but she only gave them rights to print her recipe on the packages of their chocolate morsels. Later, Nestl's lawyers found loopholes in the initial agreement that ceded the rights to the recipe from Mrs. Wakefield, and began mass producing the cookies.

Present day
Although the Nestl's Toll House recipe is the most widely known, every brand of chocolate chips (Semi-sweet chocolate morsels in Nestl parlance) sold in the U.S. and Canada contains a variant of the chocolate chip cookie on its packaging, and almost all baking oriented cookbooks will contain at least one type of recipe.

Practically all commercial bakeries offer their own version of the cookie in both packaged cooked or ready to bake forms. There are at least three national (U.S. / North America) chains that sell fresh baked chocolate chip cookies in malls and stand alone retail locations. Several businesses, including Doubletree hotels, Citibank, Aloha and Midwest Airlines, offer fresh baked cookies to their patrons to differentiate themselves from their competition. Additionally, there is an urban legend about Neiman Marcus' chocolate chip cookie recipe that has gathered a great deal of popularity over the years.

To honor the cookie's creation in the state, on 9 July 1997 Massachusetts designated the chocolate chip cookie as the Official State Cookie, after it was proposed by a third grade class from Somerset, Massachusetts.

Inventor of the Chocolate Chip Cookie and Owner of the Toll House Inn and Restaurant. Born Ruth Graves, she graduated from Framingham State Normal School (now called Framingham State College), in Massachusetts in 1924, and began work as a dietitian and food lecturer. In 1930, she and her husband, Kenneth Wakefield, purchased a Cape Cod style toll house at Whitman, Massachusetts, located halfway between Boston and the tourist town of New Bedford. Originally built in 1709 as a toll house (part inn, part restaurant, and part toll collection booth for the toll road), they turned it into a charming inn and restaurant for travelers, naming it the Toll House Inn. Ruth would cook home made meals for guests at the inn, capitalizing on its fame as a colonial building, and decorating the inn in traditional colonial styles. Ruth also adopted several traditionally colonial meals as the feature to her restaurant. Her well made colonial meals and desserts began attracting people from across New England.

In 1930, while making her popular Butter Drop Do cookies, she discovered that she had run out of powdered baker's chocolate, and substituted cut up pieces of Nestle's Semi-Sweet Chocolate Bar instead. She was surprised when the chocolate bar pieces did not melt into the cookie dough, but remained soft and intact. Serving them to her guests as ''Chocolate Chip'' cookies, they became immediately popular, and soon people were asking for her recipe. Her recipe was soon published in a Boston newspaper as Toll House Cookies, and quickly spread over New England. Sales of Nestles' Semi-Sweet Chocolate bars suddenly increased in the local area, and when Nestles' salesmen investigated, they discovered her cookies were the cause of the increased sales.

Nestles' asked for permission to print the ''Toll House Cookie'' recipe on its packaging; in exchange, Ruth received a supply of Semi-Sweet chocolate for the rest of her life. Very quickly, her recipe made its way across the country, making both Chocolate Chip Cookies and Toll House Cookies a household name. In 1939, Nestles began marketing Semi-Sweet morsels, small chips pre-made for use in these cookies, while Ruth published a cookbook, ''Ruth Wakefield's Recipes: Tried and True'' (1940), which became a best seller. In 1966, Kenneth and Ruth sold the Toll House Inn and restaurant, retiring to Duxbury, Massachusetts. The new owners turned the building into a nightclub. In 1970, the Saccone family purchased the building and restored it to the original Toll House Inn and Restaurant; on New Year's Eve 1984, the Toll House Inn caught fire and burned to the ground. Prior to her death, Ruth Wakefield donated her collection of cookbooks to her former school, Framingham State College. (biography by: Kit and Morgan Benson) 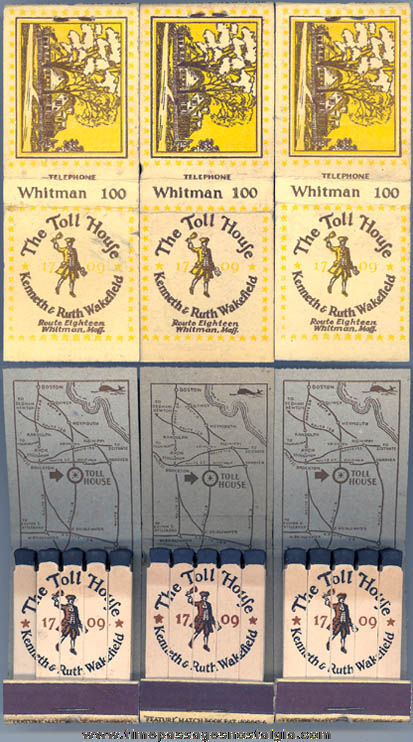