Carl Michael Yastrzemski, (born August 22, 1939), nicknamed ''Yaz'', is a former American Major League Baseball player. Yastrzemski played his entire 23 year career with the Boston Red Sox, primarily as a left fielder, with part of his later career played at first base and as a designated hitter. Yastrzemski is an 18 time all-star, the possessor of seven Gold Gloves, a member of the 3000 hit club, and the first American League player in that club to also accumulate over 400 home runs. He is second on the all time list for games played, and third for total at bats. He is the Red Sox' all time leader in career RBIs, runs, hits, singles, doubles, total bases, and games played, and is second on the team's list for home runs behind another Red Sox great, Ted Williams, his predecessor in left field. In 1967, Yastrzemski achieved a peak in his career, leading the Red Sox to the American League pennant for the first time in over two decades, in that season being voted the American League MVP, and being the last winner of the triple crown for batters in the major leagues. He was elected to the Baseball Hall of Fame in 1989.

Yastrzemski was born in Southampton, New York to Carl Yastrzemski, Sr. and Hattie Skonieczny. Both his parents were of a Polish background, and young Carl was bilingual from an early age. Raised on his father's potato farm, Carl played on sandlot baseball teams with his father, who, he maintains, was a better athlete than he was. ''Yaz'' attended Notre Dame on a basketball scholarship (his career L.I. high school scoring mark broke one previously held by Jim Brown) briefly before embarking on his baseball career, signing with the Red Sox organization, which sent him to the minor league Raleigh Capitals in 1959, where he led the league with a .377 batting average, then moved him to the Minneapolis Millers for the post season and the 1960 season. Yastrzemski, who had studied business at Notre Dame, fulfilled a promise to his parents by finishing his degree at Merrimack College in North Andover, Mass., in 1966.

Yastrzemski began his major-league career in 1961. From the beginning, there was tremendous pressure on him to perform, as he succeeded to the position of Sox legend Ted Williams. He would prove to be a worthy successor at the plate, and a far superior defensive player with a strong arm, expert in playing off the Green Monster, Fenway Park's left field wall. In 12 years as a left fielder, Yastrzemski won seven Gold Gloves and led in assists seven times. While his first two years were viewed as solid but unspectacular, he emerged as a rising star in 1963, winning the American League batting championship with a batting average of .321, and also leading the league in doubles and walks, finishing sixth in the Most Valuable Player voting.

Yastrzemski enjoyed his best season in 1967, when he won the American League Triple Crown with a .326 batting average, 44 home runs (tied with Harmon Killebrew) and 121 RBIs. He is the last hitter to have won the Batting Triple Crown as of the end of the 2009 season (six different pitchers have since won the pitchers' version). He was voted Most Valuable Player almost unanimously (one voter chose Csar Tovar of the Twins). 1967 was the season of the ''Impossible Dream'' for the Red Sox (referring to the hit song from the musical play Man of La Mancha), who rebounded from a ninth place finish a year before to win the American League pennant (their first since 1946) on the last day of the season. With the Red Sox battling as part of a four team pennant race, Yastrzemski collected 13 hits in 21 at bats (a .619 batting average) over the last six games of the season, and finished a mere one game ahead of the Detroit Tigers and Minnesota Twins. The Red Sox lost the World Series four games to three to the St. Louis Cardinals, losing three times to Bob Gibson. In that season, Yastrzemski also won the Hickok Belt as top professional athlete of the year and Sports Illustrated magazine's ''Sportsman of the Year'' Award.

In an article he co-wrote for the November 1967 issue of SPORT Magazine, Yastrzemski credited Boston's remarkable season to manager Dick Williams and an infusion of youth, including Rico Petrocelli and Tony Conigliaro. Referring to Williams, Yastrzemski wrote: ''He got rid of all the individuality, made us into a team, gave us an incentive, and made us want to win''.

In 1968 Yastrzemski again won the batting championship. Because of the competitive advantages pitchers enjoyed between 1963 and 1968 (prior to the lowering of the pitcher's mound), Yastrzemski's .301 mark in ''The Year of the Pitcher'' is the lowest average of any batting champion in major league history; however, he was the only hitter in the American League to hit .300 for that season against such formidable pitching, as well as leading the league in on base percentage and walks. He had many more strong seasons, consistently finishing in the top ten in the league in many statistical categories.

In 1969, Yastrzemski enjoyed the first of two straight 40 home run seasons as he led the Red Sox to third place finishes that year and the next. He got four hits and won the All Star Game MVP in 1970, although the American League lost. His .329 batting average that season was his career high, but he finished second behind the California Angels' Alex Johnson for the batting title by less than .001. In 1970 he led the league in slugging and on base percentage, finishing third in home runs.

In the 1975 Major League Baseball All Star Game, Yastrzemski was called to pinch hit in the sixth inning, with two men on base and the American League down 3-0. Without wearing a batting helmet, he hit Tom Seaver's first pitch for a home run to tie the score. The three run homer was the only scoring the American League did that night as they lost 6-3.

Yastrzemski and the Red Sox would suffer another World Series loss in 1975, losing four games to three to the Cincinnati Reds. Yaz made the final out in Game 7 on a fly out to center, trailing by one run. Coincidentally, he also made the final out of the 1978 American League East tie breaker game with a foul pop to third base. This game featured Bucky Dent's famous homer (although Reggie Jackson's home run was the eventual winning run). Earlier in the game, however, Yastrzemski began the scoring with a home run off left handed pitcher Ron Guidry, who was having a career year (25 wins, 3 loses and a 1.74 ERA). It was the only homer the Cy Young Award winner allowed to a left hander all season.

In 1978 Yastrzemski, then 39, was one of the five oldest players in the league. In 1982, playing primarily as a designated hitter, an early season hitting streak placed him among the league's leading hitters and saw him featured on the cover of Sports Illustrated and played in that year's All Star game.

Carl Yastrzemski's number 8 was retired by the Boston Red Sox in 1989
Yastrzemski retired in 1983 at the age of 44, although he stated in his autobiography Yaz that he was initially planning on playing the 1984 season, until he tired from a long midseason slump. He also stated that had he known how good a pitcher Roger Clemens would have been, he would have continued on in 1984 regardless, to have had a chance to play with him.

No player has had a longer career with only one team, 23 seasons, a record which he shares with Brooks Robinson of the Baltimore Orioles. His final career statistics include 3,308 games played (second all time), 646 doubles (seventh all time), 452 home runs, 1,844 RBIs (12th all time), and a batting average of .285. He had 1,845 walks in his career, (sixth all time), and 1,157 extra base hits (ninth all time). Yastrzemski was the first player to ever collect over 3,000 hits and 400 home runs solely in the American League; the feat has since been accomplished by Cal Ripken Jr.. He was named to the All Star Game 18 times.

Yastrzemski was well known for his batting stance, holding his bat exceptionally high, giving his swing a large, dramatic arc, and more power at the plate. However, in his later years, he adjusted his stance and held the bat lower. He was also known for modifying his batting helmets by enlarging the right ear hole (for comfort) and removing part of the right ear flap (for better vision of the ball as it was being pitched).

In the Red Sox Hall of Fame at Fenway Park

As one of the top players of his era, he was elected to the Baseball Hall of Fame in his first year of eligibility, with the support of 94% of voters. In 1999, Yastrzemski ranked number 72 on The Sporting News' list of the 100 Greatest Baseball Players. That same season, he was named a finalist to the Major League Baseball All Century Team. A record album of the Red Sox's 1967 season, aptly titled ''The Impossible Dream'', featured a song by DJ Jess Cain of praise for ''The man they call Yaz'', which included the line ''Although 'Yastrzemski' is a lengthy name / It fits quite nicely in our Hall of Fame'' The song can be heard, and the album cover can be seen, in the apartment of Ben Wrightman (played by Jimmy Fallon) in the 2005 film Fever Pitch. Earlier in the film, Ben's girlfriend, Lindsay Meeks (Drew Barrymore), not yet familiar with the triumphs and tribulations of the Red Sox, is unable to properly pronounce Yastrzemski's name, and has to be corrected by the surrounding fans: ''Ya-STREM-ski!'' Along with Johnny Pesky, Yastrzemski raised the 2004 World Series championship banner over Fenway Park. In his career with the Red Sox, he wore uniform number 8 from start to finish. The Red Sox retired this number on August 6, 1989 after Yastrzemski was elected to the Hall of Fame. He is currently a roving instructor with the Red Sox, and was recently honored by throwing out the first pitch in Game 1 of both the 2004 and 2007 World Series. In August, 2008, Yastrzemski underwent triple bypass heart surgery at Massachusetts General Hospital, which was successful. In June 2009, Boston drafted Carl's grandson Michael, a left fielder, out of St. John's Prep in the 36th round; Michael was committed to Vanderbilt. 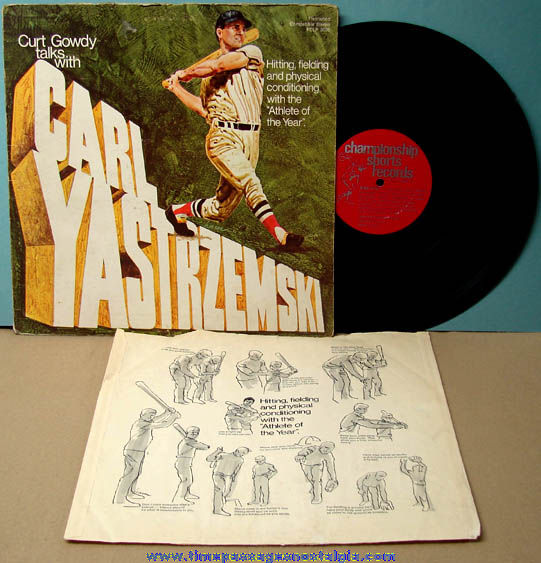 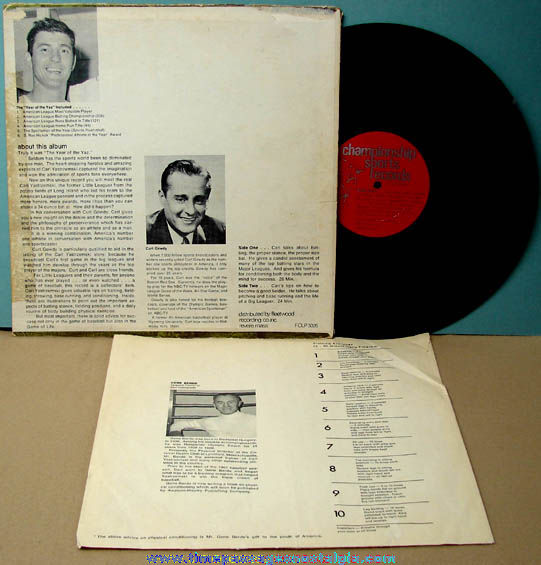