OVENPROOF
8
GALAXY
MADE IN U.S.A.

The cup or mug measures about 3-1/2'' tall. It appears to be in mint condition as pictured. Below here, for reference, is some additional information on the U.S.S. Alexander Hamilton submarine:

Alexander Hamilton's keel was laid down on 26 June 1961 at Groton, Connecticut, by the Electric Boat Division of the General Dynamics Corporation. She was launched on 18 August 1962 sponsored by Mrs. Valentine Hollingsworth, Jr., the great-great-great granddaughter of Alexander Hamilton, and commissioned on 27 June 1963 with Commander Norman B. Bessac commanding the Blue Crew and Commander Benjamin F. Sherman, Jr., commanding the Gold Crew.

Between 28 June and 18 October 1963, Alexander Hamilton carried out two shakedown cruises, one for each of her crews. Following those operations, she conducted post shakedown availability. After trials early in 1964, she departed the United States East Coast on 16 March 1964 to deploy to Rota, Spain, her base of operations. She conducted deterrent patrols out of that port for the remainder of 1964 as a unit of Submarine Squadron 16. In January 1965, she transferred to Submarine Squadron 14 and was rebased at Holy Loch, Scotland. Her cycle of patrols from there lasted until 2 June 1967, at which time she returned to the United States at Charleston, South Carolina. Later that month, she moved north to New London, Connecticut, and from there into the Electric Boat shipyard on 18 June 1967 to begin her first overhaul and nuclear refueling.

Alexander Hamilton completed the overhaul on 28 June 1968 and conducted post overhaul trials, inspections, and shakedown training until early October 1968. In November, she began a deterrent patrol enroute to Rota, her new base, where she arrived on 30 December 1968. For the next four years, she operated from Rota as a unit of Submarine Squadron 16.

At the conclusion of her 31st deterrent patrol, Alexander Hamilton returned to Charleston in November 1972 and in January 1973 began her second refueling overhaul, combined with a conversion to carry Poseidon missiles, at the shipyard of the Newport News Shipbuilding and Dry Dock Company. The work on those two modifications lasted for over two years. Upon its completion, she carried out shakedown in April 1975 and devoted the remainder of the year to training and various post overhaul trials. She conducted her 32nd and 33rd deterrent patrols in the early part of 1976. Alexander Hamilton concluded the 33rd patrol at Holy Loch in May 1976 and conducted her next three deterrent patrols from that base. While on her 35th patrol, she visited Port Canaveral, Florida, and New London, Connecticut, before concluding that patrol at Charleston in March 1977. During March and April 1977, she completed refit and conducted refresher training. In July 1977, she departed Charleston for another deterrent patrol which ended with her arrival at Holy Loch in September 1977.

Alexander Hamilton's deterrent patrols out of Holy Loch continued until 1986. At that time, she was to have been decommissioned in order to remove her from the fleet as a gesture of goodwill in accordance with the terms of the unratified SALT II strategic arms limitation treaty. Upon her arrival in Groton early in 1986, she began preparations for deactivation. The grounding of the ballistic missile submarine U.S.S.ÊNathanael Greene (SSBN-636), however, forced the Navy to change its plans. What had been a deactivation overhaul quickly became a four week maintenance availability for repairs to get Alexander Hamilton ready for active service. In April 1986, she departed for Charleston, South Carolina, for further work conducted in the floating drydock U.S.S. Alamogordo (ARDM-2). While at Charleston, she also served at sea occasionally as a training platform.

In mid June 1986, Alexander Hamilton returned to Groton. During the summer of 1986, she participated in training cruises for United States Naval Academy and Naval Reserve Officer Training Corps midshipmen. In August 1986, Alexander Hamilton's crew learned that her refueling overhaul would be conducted by the Puget Sound Naval Shipyard Bremerton, Washington. She departed Groton on 1 October 1986 to begin the voyage to Bremerton. Steaming by way of the Panama Canal, she arrived at Bremerton late in November 1986. She formally began her refueling overhaul on 30 November 1987.

Decommissioned and stricken from the Naval Vessel Register on 23 February 1993, Alexander Hamilton was disposed of through the Nuclear Powered Ship and Submarine Recycling Program at the Puget Sound Naval Shipyard. Recycling was finished on 28 February 1994. 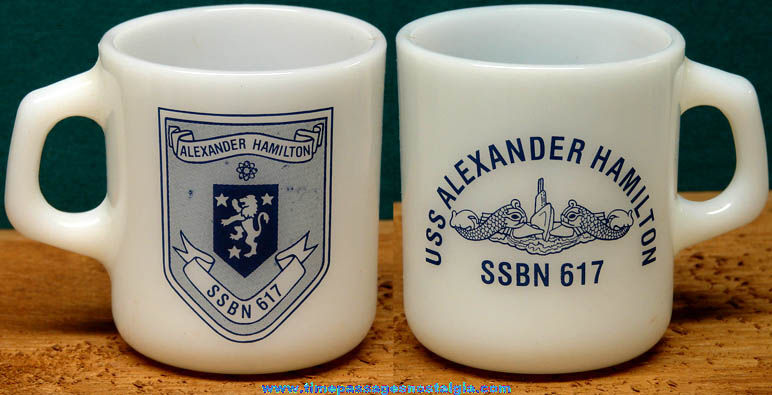