Mount Wachusett is located in the towns of Princeton and Westminster in Worcester County, Massachusetts. It is the highest point in Massachusetts east of the Connecticut River. The mountain is named after a Native American term meaning ''near the mountain'' or ''mountain place''. The mountain is a popular hiking and skiing destination (see Wachusett Mountain Ski Area). An automobile road, open spring to fall, ascends the summit. Views from the top of Mount Wachusett include Mount Monadnock to the north in New Hampshire and (on clear days) Boston to the east. The mountain is traversed by the 92 miles (148 km) Midstate Trail.

A band of old growth forest along rock ledges 500 feet (150 m) below the summit supports trees from 150 to 370 years old. Covering 220 acres, it is the largest known old growth forest east of the Connecticut River in Massachusetts.

Mount Wachusett is a glaciated monadnock: a single mountain on a relatively flat landscape. Glacial activity that shaped the mountain can be seen at Balance Rock on the northeast side of the mountain: two large boulders were stacked one on top of each other by moving glaciers thousands of years ago.

Mount Wachusett is bordered to the south by Little Wachusett Mountain and Brown Hill, to the north by Church Rock, to the east by Pine Hill, and to the northeast by the Crow Hills. The nearest mountain of comparable size is Mount Watatic, 1,832 feet (558 m), 12 mi (19 km) to the north on the New Hampshire border in Ashburnham, Massachusetts.

Wachusett Mountain is home to a 22 trail ski area serviced by 2 high speed quads, 2 fixed grip triples and 3 magic carpet lifts. It features approximately 1,000 feet (300 m) of vertical, a 50,000 square foot (4,600 m2) base lodge, 100% snowmaking and night skiing on 18 trails. The mountain also maintains a terrain park and a 300 foot (91 m) half pipe. Due to its location, it is a popular skiing destination for residents of nearby Worcester and Boston. The ski area is located within the boundaries of the Wachusett Mountain State Reservation on a 450 acre (1.8 km2) lease parcel on the northern slopes of the mountain.

Stands of old growth hardwood forest on Mount Wachusett became the object of a 2003 court ruling in favor of the Commonwealth of Massachusetts in joint contract with the ski area regarding plans for a ski slope expansion into an environmental buffer zone around the old growth stand. The old growth forest contains trees over 350 years old; the buffer zone contained mature trees about half that age. The Sierra Club and other conservation organizations criticized the ruling and two members of Earth First! staged a sit in protest by climbing into the crowns of several of the trees in the area slated to be clear cut. As of 2007 wording on the website of the Wachusett Mountain Ski Area included strong language prohibiting skiers and snow boarders from entering the old growth area: ''Anyone found entering old growth areas will have their lift ticket revoked. Subsequent offenses will be subject to fines.''

The name Wachusett has been adopted for the names of institutions, businesses, structures, geographic features, and other miscellaneous uses, for instance, Wachusett Reservoir, Wachusett Brewing Company, and the U.S.S. Wachusett. It is also the title of Henry David Thoreau's ''A Walk to Wachusett'', which describes the transcendentalist author's experiences on the summit. 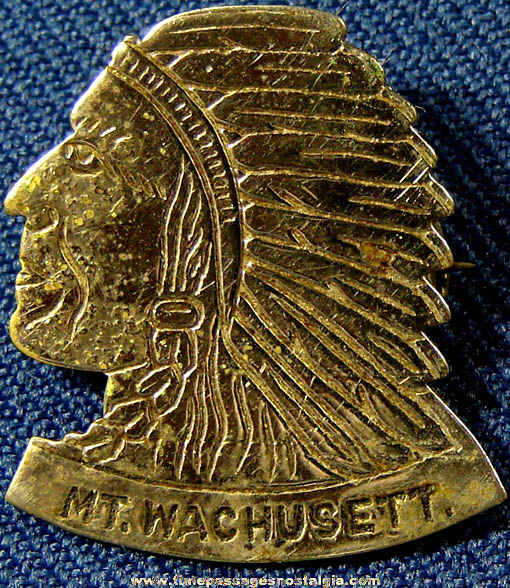