The pin back buttons each measure 1-1/2'' wide. They are in good condition with spotting and surface rusting on the backs as pictured. One of the paper inserts has a missing section.

Below here, for reference, is some information on the U.S.S. English:

U.S.S. English (DD-696), an Allen M. Sumner class destroyer, named for Robert Henry English, a submariner who commanded the U.S.S. Helena (CL-50) and was awarded the Navy Cross and the Navy Distinguished Service Medal. Rear Admiral English was so serving when killed in an airplane accident in California 21 January 1943.

History
The English was launched 27 February 1944 by Federal Shipbuilding and Drydock Co., Kearny, New Jersey; sponsored by Ensign Eloise W. English, U.S.N.R.(W), daughter of Rear Admiral English; and commissioned 4 May 1944, Commander J. T. Smith in command. English arrived in the Hawaiian Islands 3 September 1944 for final training, and service as plane guard during the qualification of aviators in carrier operations. On 17 December, she sailed from Pearl Harbor for Ulithi, where on 28 December she joined the screen for mighty carrier TF 38. She put to sea 2 days later for air strikes to neutralize Japanese bases on Formosa, Luzon, Okinawa, and the Indo-China coast in coordination with the invasion of Lingayen Gulf. English returned to Ulithi to replenish between 26 January 1945 and 8 February, then sailed to Saipan to meet the U.S.S. Indianapolis (CA-35) and escort her to a rendezvous with newly designated TF 58. She screened the carriers as they launched the series of strikes accompanying the Iwo Jima operation, hitting Tokyo both before and after the assault, Iwo Jima itself, and Okinawa.

After taking on fuel and stores at Ulithi from 4 March 1945 to 14 March, English sortied with TF 58 for strikes on Kyushu heralding the Okinawa operation. When the U.S.S. Franklin (CV-13) was heavily damaged by bombing on 19 March off Kyushu, English screened the carrier's retirement from the action area, then rejoined the screen for strikes on Okinawa and nearby islands in the days preceding the assault. On 1 April, she closed Okinawa to provide fire support for the invading troops, returning to the carrier screen for continued strikes on shore targets and Japanese shipping. She left the task force to bombard Minami Daito Shima on the night of 10 May. Next day English went close alongside the U.S.S. Bunker Hill (CV-17), damaged by a kamikaze, to help in fighting fires, and to take off Vice Admiral Marc Mitscher and his staff, whom she transferred to another carrier.

English put in to San Pedro Bay, Philippines., from 1 June 1945 to 1 July for repairs and exercises, then sailed again with TF 38 for the final pounding series of air strikes on the Japanese homeland. She closed the coast of Honshu on 18 July to hunt Japanese shipping in Sagami Wan and to bombard targets on Nojima Saki. In Tokyo Bay from 10 to 19 September, English voyaged to escort occupation shipping from the Marianas, then after 2 months of occupation duty cleared Sasebo for the long passage to Boston, Massachusetts where she arrived 26 April 1946.

English operated out of Boston, Massachusetts and later Charleston, South Carolina, and New Orleans, Louisiana for exercises and to train members of the Naval Reserve, cruising along the east coast and in the Caribbean. From 23 April 1949 she was home ported at Norfolk, Virginia from which she sailed 6 September for her first tour of duty with the 6th Fleet in the Mediterranean. She returned to Norfolk 26 January 1950 for exercises off the Virginia Capes and in the Caribbean.

Alerted for distant deployment upon the outbreak of the Korean war, English departed Norfolk 6 September 1950 for the Panama Canal, San Diego, Pearl Harbor, Midway, and Yokosuka, where she arrived 5 October. She supported the withdrawal from Hungnam, then proceeded with two corvettes of the Royal Thai Navy to shell Communist positions at Choderi and Chonjin. On 7 January 1951, one of these, HMTS Prase, grounded in a heavy snowstorm, and after arduous attempts to salvage her, English destroyed the corvette with gunfire. On 20 January 1951 English began duty as direct fire support ship for a division of the Korean army, blasting positions at Kanson, Kosong, and Kangnung to support the Korean advance ashore. She served on blockade at Chongjin and Wonsan, where in 20 consecutive days on the firing line she silenced 20 attacks by Communist shore batteries. After a final period of service screening carriers on both coasts of Korea, she sailed from Yokosuka 11 May eastbound for Norfolk.

From her return to Norfolk 9 June 1951, English resumed local training operations, and in the winter of 1952 joined in cold weather exercises off Newfoundland and Nova Scotia. On 26 August 1952 she departed for NATO operations in which she visited British ports, sailing on to a tour of duty in the Mediterranean from which she returned to Norfolk 5 February 1953. In the fall of 1954 she visited Lisbon, Portugal. On 31 October, while at sea for a major fleet exercise, she was in collision with the U.S.S. Wallace L. Lind (DD-703), but though English lost 50 feet of her bow, she suffered no casualties. Skillful seamanship brought her into port under her own power, and she was repaired in time to join in large scale exercises in the Caribbean early in 1955.

From May to August 1955, English made a good will cruise to ports of northern Europe, and between 28 July 1956 and 4 December served again in the Mediterranean, visiting Bahrein in the Persian Gulf. With the eruption of the Suez Crisis, she aided in evacuating American citizens from the troubled area, and patrolled the eastern Mediterranean to serve with the 6th Fleet. Returning to Norfolk in April she spent the remainder of 1959 and all of 1960 in conducting an intensive program of antisubmarine warfare exercises.

English sailed for the Med and the Sixth Fleet in September 1961 returning to Norfolk nine months later. William Mahan was the Captain; J. B. Allen the Executive Officer. First port of call was Suda Bay, Crete, followed, not necessarily in order, by Naples, Livorno, and LaSpezia, Italy; Barcelona, Spain; and Toulon, France. In October 1962 the English sailed and served duty during the Cuban Missile Crisis. Primarily acting as ''Plane Guard'' for the U.S.S. Independence and U.S.S. Enterprise. Over 30 days at sea without replenishment. English received four battle stars for World War II service, and four for Korean war service. 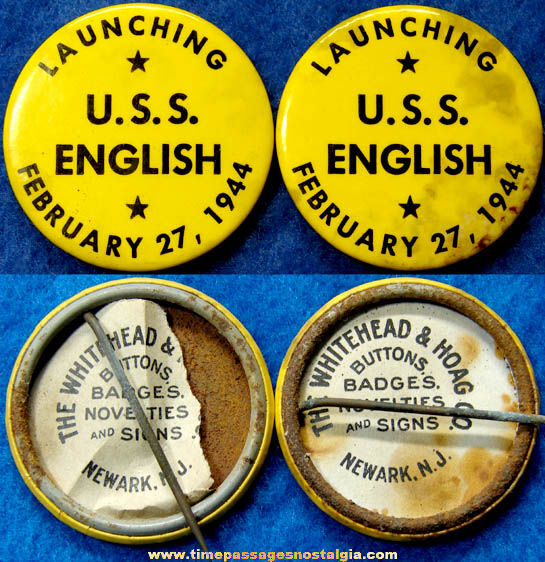