Parts of the West Indies. Rhode Island, July 26. This Day, 26 of the Pirates taken by his Majesty Ship the Greyhound, Captain Solgard, were executed here. Some of them delivered what they had to say in writing, and most of them said something at the Place of Execution, advising all People, young ones especially, to take warning by their unhappy Fate, and to avoid the crimes that brought them to it. Their black Flag, under which they had committed abundance of Pyracies and Murders, was affixd to one Corner of the Gallows. It had in it the Portraiture of Death, with an Hour Glass in one Hand, and a Dart in the other, striking into a Heart, and three Drops of Blood delineated as falling from it. This Flag they called Old Roger, and usd to say, They would live and die under it.

Design
The first recorded uses of the skull and crossbones symbol on naval flags date to the 17th century. It possibly originated among the Barbary pirates of the period, which would connect the black color of the Jolly Roger to the Muslim Black Standard (black flag). But an early reference to Muslim corsairs flying a skull symbol, in the context of a 1625 slave raid on Cornwall, explicitly refers to the symbols being shown on a green flag. There are mentions of Francis Drakes flying a black flag as early as 1585, but the historicity of this tradition has been called into question. Contemporary accounts show Peter Easton using a plain black flag in 1612; a plain black flag was also used by Captain Martels pirates in 1716, Blackbeard, Charles Vane, and Richard Worley in 1718, and Howell Davis in 1719. An early record of the skull and crossbones design being used on a (red) flag by pirates is found in a December 6, 1687 entry in a log book held by the Bibliothèque nationale de France. The entry describes pirates using the flag, not on a ship but on land.

17th and 18th century colonial governors usually required privateers to fly a specific version of the British flag, the 1606 Union Jack with a white crest in the middle, also distinguishing them from naval vessels. Before this time, British privateers such as Sir Henry Morgan sailed under English colors. An early use of a black flag with skull, crossbones, and hourglass is attributed to pirate captain Emanuel Wynn in 1700, according to a wide variety of secondary sources. Reportedly, these secondary sources are based on the account of Captain John Cranby of HMS Poole and are verified at the London Public Record Office.

With the end of the War of the Spanish Succession in 1714, many privateers turned to piracy. They still used red and black flags, but now they decorated them with their own designs. Edward England, for example, flew three different flags: from his mainmast the black flag depicted above; from his foremast a red version of the same; and from his ensign staff the English national flag. Just as variations on the Jolly Roger design existed, red flags sometimes incorporated yellow stripes or images symbolic of death. Colored pennants and ribbons could also be used alongside flags.

Marcus Rediker (1987) claims that most pirates active between 1716 and 1726 were part of one of two large interconnected groups sharing many similarities in organisation. He states that this accounts for the comparatively rapid adoption of the piratical black flag among a group of men operating across thousands of miles of ocean, suggesting that the skull-and-crossbone design became standardized at about the same time as the term Jolly Roger was adopted as its name. By 1730, the diversity of symbols in prior use had been mostly replaced by the standard design. 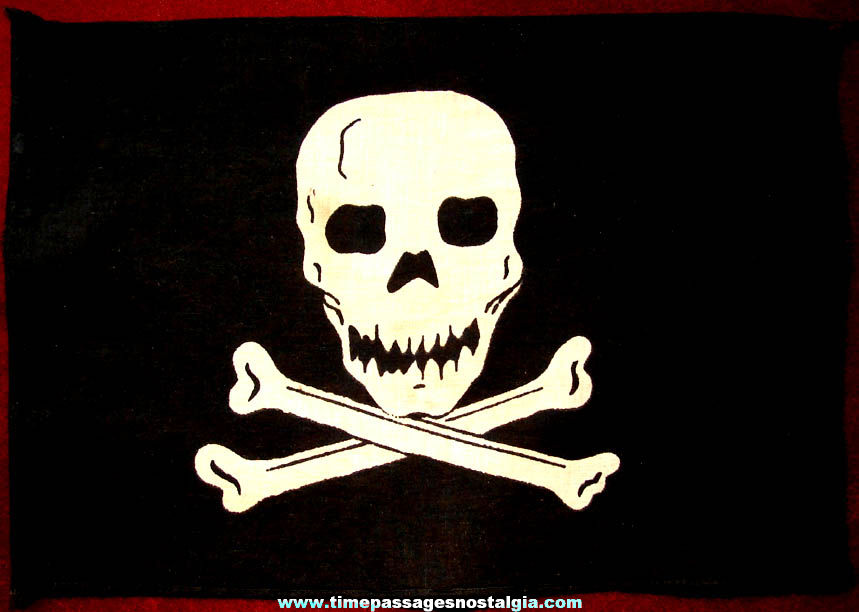