Pioneer Club Las Vegas was a casino that opened in 1942 and was located in Downtown Las Vegas, Nevada, at 25 East Fremont Street. It ceased operating as a casino in 1995, the same year the Fremont Street Experience was completed.

Margaret Elardi who also owned the Frontier Hotel on The Strip and later the Pioneer Hotel & Gambling Hall casino in Laughlin, owned the club for a while, then Gold Strike Resorts. In 1992 new owners purchased the Pioneer Club but were unable to compete with the larger casinos on Fremont Street both at the beginning and at the end of the Fremont Street Experience or with the large new megaresorts on The Strip. The owners closed the venerable casino in 1995 and it remained vacant until 1998 when Schiff Enterprises bought the Pioneer Club and opened a souvenir store inside. The vintage Pioneer Club signs and Vegas Vic sign still exists on the exterior of the building.

Vegas Vic
Although the Pioneer Club no longer operates as a casino, Vegas Vic (The 40 foot [3] neon cowboy) lives on. In 1947 Las Vegas chamber of Commerce hired a West Marquis firm which invented the Fremont Street Cowboy Vegas Vic and his friendly Howdy Podner greeting.

The Young Electric Sign Company was commissioned to build the neon version of the sign by the owners of the Pioneer Club. They then commissioned Pat Denner who modeled it after the image used by the Las Vegas Chamber of Commerce in 1947 consisting of a cowboy in blue jeans with a yellow checked shirt and red bandanna. Vegas Vic was then erected on the exterior of the building in 1951 changing the exterior of The Pioneer club forever. 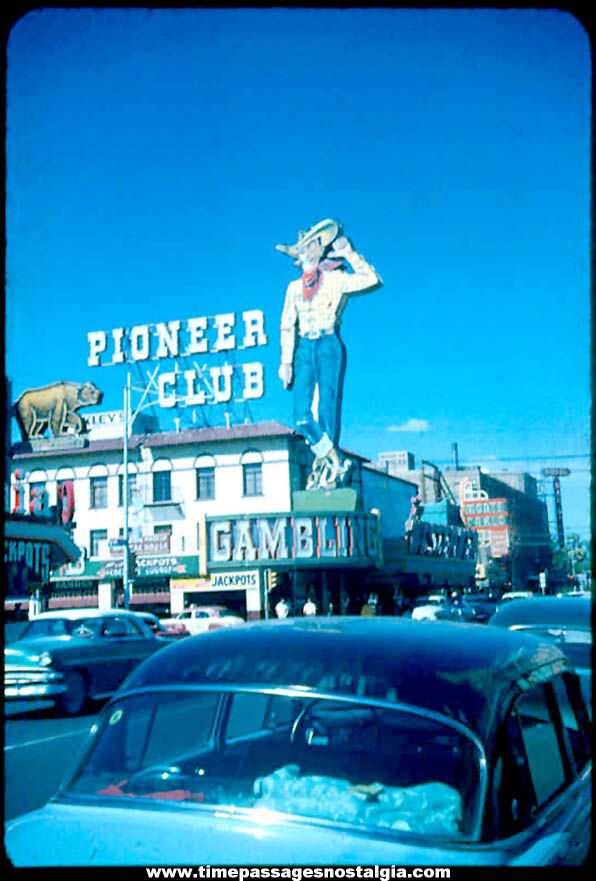