Hitting Bio
Earle Combs was an ideal lead off hitter for the legendary Yankee teams of the 1920s and early 1930s. A keen-eyed center fielder, he averaged nearly 200 hits and 70 walks a season during his prime years, helping him compile a .325 career batting mark. Combs' exceptional speed aided him both offensively and defensively, enabling him to lead the American League in triples three times and putouts twice. Unfortunately, a pair of serious collisions -- with an outfield wall in St. Louis in 1934 and with a teammate in 1935 -- shortened his productive career.

Quote
''If you had nine Combses on your ball club, you could go to bed every night and sleep like a baby.''
 Miller Huggins

Did You Know... that on April 18, 1929, Earle Combs became the first member of the Yankees to step to the plate wearing a uniform number when he wore #1 on Opening Day against the Red Sox? 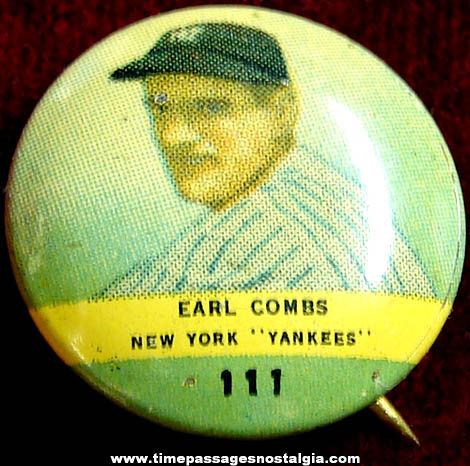