All thirteen of these pin back buttons for one price! To judge the sizes the largest pin or button measures about 2-1/4'' wide. These appear to be in excellent to mint condition as pictured.

Below here, for reference, is some additional information about both Hubert Humphrey and Gordon Humphrey:

Hubert Horatio Humphrey Jr. (May 27, 1911 - January 13, 1978) was an American politician who served as the 38th Vice President of the United States under President Lyndon B. Johnson, from 1965 to 1969. Humphrey twice served in the United States Senate, representing Minnesota from 1949 to 1964 and 1971 to 1978. He was the nominee of the Democratic Party in the 1968 presidential election, losing to the Republican nominee, Richard M. Nixon.

Gordon John Humphrey (born October 9, 1940) is an American politician from New Hampshire who served two terms in the U.S. Senate as a Republican from 1979 to 1990, and twice ran for Governor of New Hampshire, though both bids were unsuccessful.

Early life and education
Humphrey was born in Bristol, Connecticut. His first career path was in aviation: he served in the United States Air Force for several years and, following college (George Washington University and the University of Maryland, College Park), he became a professional pilot.

Originally a liberal, Humphrey said he converted to conservatism because of the force of my own logic.

In 1977, Humphrey became the leader of the New Hampshire chapter of Conservative Caucus, which had been looking for someone to head it up for months. Humphrey volunteered and began organizing signature gathering for petitions and putting together well attended rallies.

U.S. Senate Elections
In 1978 Humphrey won election to the U.S. Senate, despite being only a local Republican activist holding no political office. He defeated three term incumbent Thomas J. McIntyre by barely two percent. He won election without help from the Republican Party and had few links to party regulars. Humphreys 18 month campaign was run for the most part by himself and Patricia Green, a former New York City schoolteacher whom he married just after the four way GOP primary that September. According to a New York Times article written a month after the election, she was considered the strongest force in his camp and is expected to have a strong influence on his Washington staff.

Humphrey was easily reelected in 1984, defeating five term Democratic U.S. congressman Norman DAmours. Humphrey declined to run for a third term in 1990, having promised to serve only two terms. Humphrey was praised for his outspokenness as a Senator. In 1987, Humphrey harshly criticized President Ronald Reagans appointment of openly gay geneticist Dr. Frank Lilly to his commission on the HIV Epidemic, saying that Lillys appointment would send the message . . .that homosexuality is simply an alternative lifestyle.

Committee assignments
In the Senate Humphrey served on the Committee on Foreign Relations, the Armed Services Committee and the Judiciary Committee and was a leader in the Congressional Task Force on Afghanistan, which shaped U.S. policy regarding the SovietAfghan War and Operation Cyclone. He voted against the federal budget all 12 years he was a member of the Senate, each time because the proposed budget ran a deficit.

Role at 1988 GOP Convention
Humphrey played a major role at the 1988 Republican National Convention as a leader and spokesman for right wing delegates. He was instrumental in steering the vice presidential nomination to Dan Quayle, having marshaled the commitment of four state delegations to run their own vice presidential candidate in the event a candidate not to their liking was picked by George H. W. Bush. Under party rules, six delegations were needed. Bushs choice of Quayle, who was pro-life (as was Humphrey), satisfied the Granite State senator.

Later political career
Instead of running for a third term, Humphrey ran for and won a seat in the New Hampshire State Senate. He served one term. There were reports of his making a possible run for president on the Republican ticket in both 1988 and 1992, but neither happened.

Humphrey returned to New Hampshire politics in 2000 by challenging incumbent Governor Jeanne Shaheen. Shaheen, a Democrat, was considered vulnerable in the wake of a State Supreme Court decision requiring the state to play a larger role in funding education, which many saw as a path toward instituting a statewide income or sales tax. Humphrey pledged to block attempts to enact such taxes, but was narrowly defeated in a contentious campaign.

He ran for the Republican nomination for governor again in 2002, but businessman Craig Benson eventually won the nomination and the governors race. Humphrey finished third, and said the campaign would be his last.

Post political career
In 2004 Humphrey entered the field of radio broadcasting, purchasing an AM station in Concord, WKXL. He lives in Chichester, New Hampshire with his wife, Patricia, and their two children.

Support for Edward Snowden
In 2013, Humphrey made headlines when he expressed support for whistleblower Edward Snowden, who exposed the mass surveillance of Americans and foreign nationals by the National Security Agency. Journalist Glenn Greenwald reported that Humphrey, a former member of the Senate Foreign Relations Committee, contacted Snowden via email, telling him that, Provided you have not leaked information that would put in harms way any intelligence agent, I believe you have done the right thing in exposing what I regard as massive violation of the United States Constitution. Humphrey complained to Snowden that no effort is being made to identify, remove from office and bring to justice those officials who have abused power, seriously and repeatedly violating the Constitution of the United States and the rights of millions of unsuspecting citizens. He cited Snowden as a courageous whistle blower. Snowden replied with a message thanking Humphrey.

2016 presidential election
In 2015, Humphrey endorsed Ohio governor John Kasich for President in 2016. During the 2016 Republican presidential primaries, Humphrey was a leader of efforts to try to block Donald Trump from securing the nomination at the Republican National Convention. He stated, I would only vote for Hillary [referring to Hillary Clinton, the Democratic nominee] in the event of a very close contest. Meantime, Im hoping the Republican leadership, at long, long last will show the courage and principle to denounce Trump and to demand he renounce the nomination or face a reconvening of the convention. On November 6, 2016, two days before the election, Humphrey officially endorsed Clinton. That same month, Humphrey left the Republican Party and became an independent. On August 9, 2017, Humphrey extended his opposition to President Trump by calling for his removal from office in a letter addressed to his own member of Congress, Democratic Rep. Ann McLane Kuster, arguing that Trump is sick of mind and dangerous. 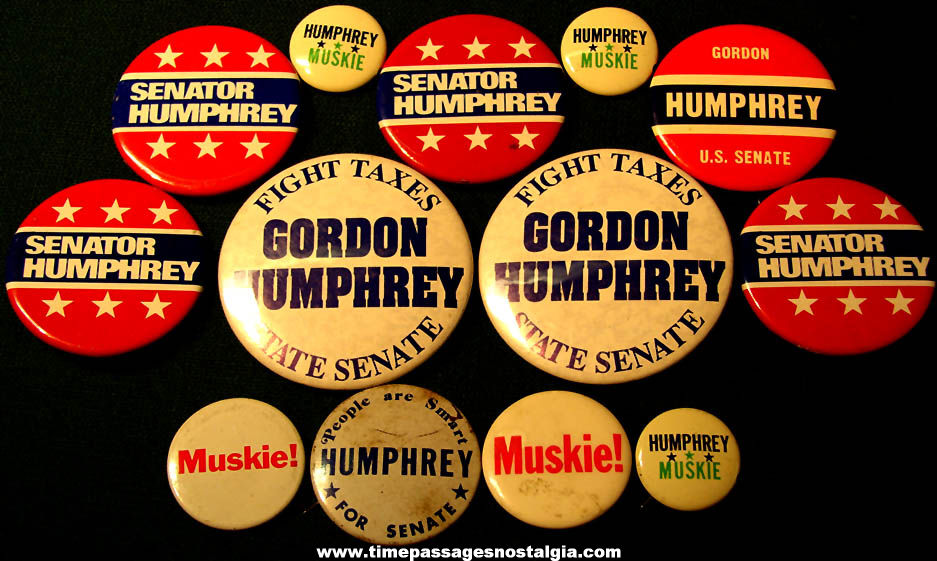