The closed menu (as pictured) measures 6-1/2'' x 8''. It is in good condition with wrinkling, folds, and wear as pictured. On the back is a hand written note that reads ''DEAR MOM, I FORGOT TO PUT THIS IN THE ENVELOPE.'' Below here, for reference, is some History for the U.S.S. Cambria:

The U.S.S. Cambria (APA-36) was a Bayfield class attack transport acquired by the U.S. Navy for service in World War II. Cambria was launched 10 November 1942 as SS Sea Swallow by the Western Pipe and Steel Company, San Francisco, California, under a Maritime Commission contract; sponsored by Mrs. W. Griffin; acquired by the Navy 4 May 1943; placed in partial commission the same day, Lieutenant Commander W. S. Baker in command; sailed to New York for decommissioning and conversion to an attack transport; and recommissioned 10 November 1943, Captain C. W. Dean, USCG, in command.

Invasion of the Marshall Islands

The U.S.S. Cambria departed Norfolk, Virginia, 11 December 1943 and arrived at Pearl Harbor on New Year's Day. After three weeks of intensive training, she sailed on 23 January 1944 for the invasion of the Marshall Islands, where she served as flagship for Majuro Attack Group during the landings.

After overhaul at San Francisco, California, and refresher training at Pearl Harbor, Cambria left 30 May 1944 for the Marianas invasion, again serving as flagship of an attack group. She took part in the assault on Saipan which began 15 June and during the next 24 days embarked 715 casualties of the desperate fighting on the island. Flying the flag of Commander task force TF 52, she led the invasion of Tinian (24 July - 1 August); here she handled another 613 casualties.

Embarking U.S. Army troops and equipment at Honolulu, Cambria got underway 15 September 1944 for Manus, arriving 3 October to join the Southern Attack Group for the invasion of the Philippines. On 20 October she landed troops at Dulag, Leyte, in the first assault wave, then remained off Leyte as a casualty evacuation ship, receiving 70 wounded from the beach. Cambria lifted reinforcements from Oro Bay, New Guinea, to the Leyte area, then returned to New Guinea for rehearsal landings at Huon Gulf.

Cambria landed troops at Lingayen Gulf during the invasion landings 10 January 1945, and after a reinforcement mission from San Pedro Bay to Lingayen Gulf, got underway for Tulagi, Florida Island, to train for the invasion of Okinawa.

Cambria staged at Ulithi, then put her troops ashore at Okinawa on 1 April 1945. She completed her unloading two days later and sailed for San Pedro, California, arriving 3 May for an overhaul which lasted until the end of hostilities.

For the remainder of the year she was engaged in the redeployment of forces in the Far East, and then as a participant in the giant Magic Carpet operation which brought back demobilizing troops to the United States.

Sailing from San Francisco, California, 11 January 1946, Cambria arrived at Norfolk, Virginia, on the 27th for duty with the Atlantic Fleet. She operated from her new home port on local exercises and training assaults in the Caribbean until placed out of commission in reserve 30 June 1949.

Recommissioned 15 September 1950 with the outbreak of war in Korea, Cambria, alternated local operations and training in the Caribbean and off Labrador with three tours of duty with the U.S. 6th Fleet in the Mediterranean. On her 1956 cruise with the 6th Fleet Cambria landed United Nations troops at Gaza during the Suez crisis.

Returning to Norfolk 2 February 1957, Cambria resumed operations and exercises in the Caribbean and along the eastern seaboard. This routine was interrupted in the summer of 1958, when, on 10 September, Cambria sailed to join the 6th Fleet in support of the American landings at Beirut, Lebanon. She remained at this port until 18 October 1958 and in the Mediterranean until the end of the year to complete a regular tour with the 6th Fleet.

She returned to the States in March 1959, visited Great Lakes ports during June and July in connection with the opening of the Saint Lawrence Seaway, and operated on the east coast. Cambria made another 6th Fleet cruise during the first half of 1960, then resumed U.S. East Coast operations for the remainder of the year. She was also involved in the Cuban crisis in 1962 and removed all the top secret things and personal from Gitmo and steamed for 72 days just off the coast and then returned to Norfolk, Virginia. 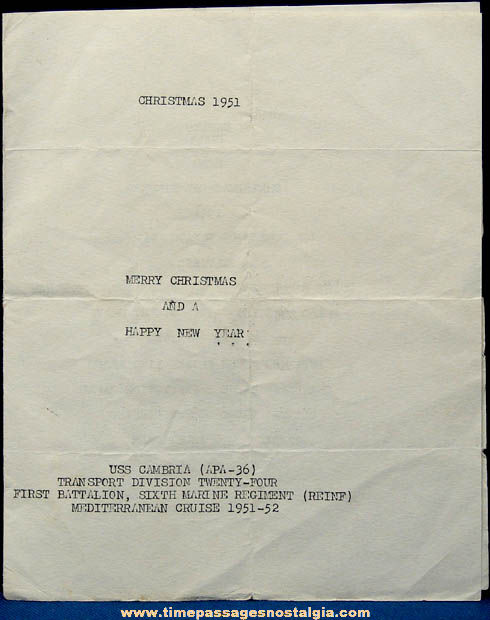