House of Tomorrow was themed like similar ''looks at the future'' featured at Disneyland and the World's Fair. The robot from the 1939 New York World's Fair was a prominent display.

Sea Circus was included in the basic attraction price. Performing dolphins and sea lions played to audiences of 2000 at a time. After the show, visitors could feed seals in the Seal Pool.

Diving Bells in which passengers were submerged into the ocean via hydraulic pistons. A vast underwater vista was clearly visible through the portholes.

Ocean Skyway were bubble-shaped gondolas suspended 75 feet above the surface of the ocean. Passengers were treated to a one-half mile trip out to sea and back.

Flight to Mars was an audio-visual presentation that simulated a trip to Mars.

Flying Carpet was a ride themed around Tales of the Arabian Nights. ''Flying carpets'' suspended on an overhead track took visitors over an Arabian themed diorama.

Davy Jones' Locker was another funhouse with a nautical theme.

Flying Dutchman was a dark ride similar to what Disneyland would present in 1967 with the opening of Pirates of the Caribbean.

Round the World in 80 Turns was an unusual combination of travelogue and thrill ride. Tub-like ride vehicles whipped sharply to the right and left to show travel scenes from around the world. The attraction was closed in the middle of the park's second season due to complaints of nausea and neck and back pain.

Safari Ride was an interactive children's ride in which riders in miniature Jeeps used an electronic rifle to ''hunt'' animals in the African jungle.

Mystery Island Banana Train Ride Considered by many to Pacific Ocean Park's best ride, passengers were treated to a trip aboard a tropical banana plantation train complete with a simulated volcano and simulated earthquakes.

Whirl Pool was a centrifuge that pinned riders to the walls as the floor slowly lowered beneath them.

Carousel was the 1926-vintage Looff carousel from the original pier.

Fisherman's Cove and the International Promenade where shopping, dining and souvenir areas which featured a number of good, international restaurants.

Space Wheels where a unique pair of double Ferris wheels.

Fun Forest was a new children's area with mazes and slides along with helicopter, boat, monorail and covered wagon rides.

The end
In 1965, Santa Monica began its Ocean Park urban renewal project. Buildings in the surrounding area were demolished and streets leading to the park were closed. As a result, visitors simply couldn't reach the park and attendance plummeted to 621,000 in 1965 and 398,700 in 1966.

At the end of the 1967 tourist season, the park's creditors and the City of Santa Monica filed suit to take control of the property because of back taxes and back rent owed by the park's new owner since 1965. Pacific Ocean Park closed on October 6, 1967. The park's assets were auctioned off June 28 through June 30, 1968. The proceeds from the sale of thirty-six rides and sixteen games were used to pay off creditors. The ruins of the pier became a favorite surfing area and hangout of the Z-Boys of Dogtown fame. The park's dilapidated buildings and pier structure remained until several suspicious fires occurred and it was finally demolished in the winter of 1974 - 75.

Other than a few underwater pilings and signs warning of them, nothing remains of Pacific Ocean Park today. However, a few miles north, the original Santa Monica Pier does feature a newer amusement park, similarly called Pacific Park. Today, the rides and attractions of the Santa Monica Pier include the old Carousel that is featured prominently in the 1973 Academy Award -winning film,The Sting. 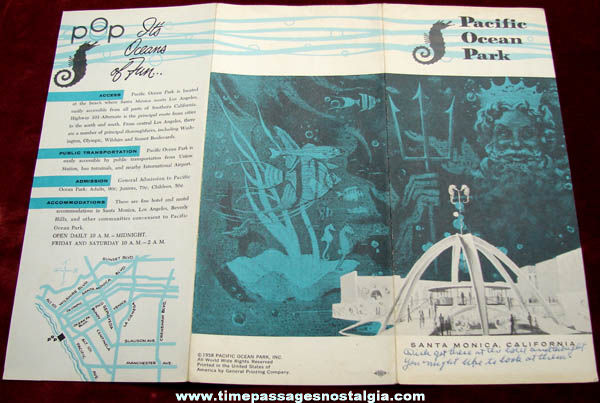 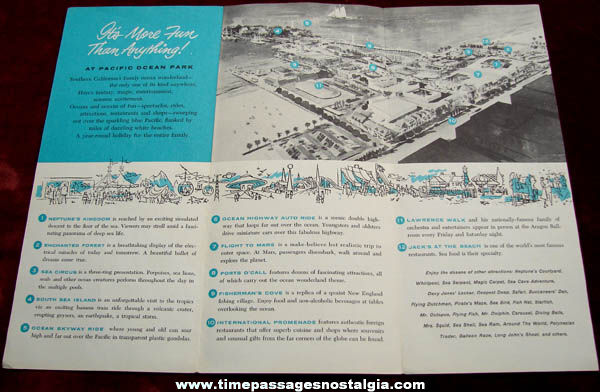