The match books each measures 1-1/2'' x 3-7/8''. All of these are unused. The four that are still wrapped are in mint condition. The loose one has some spotting as pictured. Below here, for reference, is a History of the Aeroquip Corporation that was found:

With operations on five continents, Aeroquip Corporation ranks among the world's largest producers of industrial hoses, fittings and clamps. Over the course of its more than fifty years in business, Aeroquip's product line has expanded from a limited number of proprietary hoses and fittings for aircraft to include hundreds of products used in applications ranging from automobiles to spacecraft.

The company was acquired by Libbey-Owens-Ford Glass Company in a friendly merger in 1968 and moved its headquarters to Maumee, Ohio, a suburb of Toledo. When Libbey-Owens-Ford sold its historic name and glassmaking capacity to Pilkington PLC in 1986, the parent gave the remaining companies (including Aeroquip) the collective name ''TRINOVA.'' By the mid 1990s, Aeroquip's markets included: automotive, off highway equipment, industrial machinery, air conditioning and refrigeration, commercial and military aircraft, marine equipment, machine tool manufacture, material handling, and even amusement parks.

Aeroquip was founded by Peter F. Hurst, who emigrated from Germany to the United States in 1939. Trained as an engineer, Hurst had begun his postgraduate career with the Berlin based Argus Motor Company's British aircraft operations in 1934. Before long the 24 year old Hurst was placed in charge of Rotadisk, a subsidiary that designed and made aircraft brakes. Under contract with German aircraft manufacturer Focke-Wulf, Hurst and Rotadisk undertook a thorough overhaul of the airplanes' wheels and hydraulic brakes. The braking system's hoses came under particular scrutiny. Up to this point, hoses were permanently attached to the systems they served. When they wore out, the entire brake mechanism had to be replaced. Hurst's team came up with a detachable, reusable hose fitting that allowed the less durable hoses to be replaced without having to go through the tedious and time consuming process of draining the entire system. This relatively simple device reduced the weight of the hydraulic brakes, simplified repair, and helped increase the aircraft's fuel efficiency. It also became the foundation of Hurst's lifelong work.

The inexorable build up to World War II brought profound changes to Hurst's life and career. In 1939, Argus sent the young engineer to America in the hopes of setting up a United States subsidiary. Hurst had barely spent a week in the United States when Germany invaded Poland. Loath to return to his homeland, Hurst got an extension of his original three-month visa and stayed stateside. Hurst licensed the patents for the hydraulic devices from Argus and began negotiating a licensing and manufacturing agreement of his own with Hayes Industries Inc. of Jackson, Michigan. When that plan fell through, he decided instead to form his own manufacturing concern. Hurst enlisted the financial and managerial backing of some of Jackson's most prominent businessmen, among them: Charles Hollerith, Don T. McKone, Sr., Stuart M. Schram, Donald M. Teer, and F. F. Ingram. Hurst convinced these five and five others to invest $1,000 each in the new venture. They called their company Aeroquip, a contraction of aeronautical and equipment. Before that first year was out, the new company's stakeholders chipped in another $10,000 each to purchase an abandoned milk processing plant and manufacturing equipment. Within two years, the company's employee roster had burgeoned to 100.

Aeroquip's hydraulic devices caught the attention of American military leaders, and their eagerness to outfit U.S. warplanes with the new system got Aeroquip off to a healthy start. In fact, company publications proudly note that ''Aeroquip hoses and fittings became the U.S. standard for military aircraft use.'' Wartime demand ran so high that at times the company struggled to meet it. However, war brought other, less welcome changes to the company. By virtue of his German citizenship, Hurst was compelled to relinquish his position as general manager at Aeroquip when America joined its European allies in declaring war on the Axis countries. (Since Hurst had not yet attained full citizenship, he had been classified as a ''consultant'' with the title of general manager at Aeroquip. Founding investor Don T. McKone held the title of president from the company's inception until 1948.) Hurst's pragmatic acquiescence to what must have been a rather insulting order mdash an ''enemy alien,'' he wasn't even allowed to enter Aeroquip's plant mdash-abled the company to maintain is lucrative military contracts. After a 21 month hiatus (during which the indomitable immigrant started a thoroughly patriotic recycling company), Hurst was permitted to return to Aeroquip's executive ranks. He became an American citizen in 1945 and went on to serve the company as president and later CEO and chairman from 1948 until he suffered a stroke and died in 1969 at the age of 58.

Wartime sales peaked at over $6.2 million in 1944, then plunged to less than $1 million in 1946 with the loss of military demand. Aeroquip began to shift its emphasis from military to commercial aircraft but encountered many difficulties in the immediate postwar era. In the midst of these financial problems, a two month strike that the company itself described as ''bitter'' marred 1948.

Growth through Acquisitions during the 1950s and 1960s

Aeroquip went public with the sale of over 150,000 shares at $4 each in July 1950. The proceeds went primarily to the original stockholders, but the company itself cleared about $65,000 to fund the ambitious acquisition plan that helped develop Aeroquip's new commercial interests. From 1948 to 1959, Aeroquip acquired four domestic manufacturers of hydraulic systems components. The 1955 acquisition of Marman Products Company was a highlight of the decade. Originally founded by Herbert ''Zeppo'' Marx of the Marx Brothers, by the mid-1950s this company specialized in clamps couplings and straps for airplanes. Aeroquip even expanded internationally, acquiring its Canadian licensee in 1955 and establishing two plants in Germany in 1959. Sales grew rapidly in concert with the pace of acquisitions. Annual revenues increased about 45 percent, from $33.4 million in 1956 to $48.23 million by 1959, and profits kept pace, growing by 50 percent, from $1.8 million to $2.7 million.

The 1960s brought more acquisitions, fueling vertical integration and furthering geographic expansion. Barco Manufacturing Co. of Illinois, a producer of ball, swivel and rotary joints, was brought on board in 1962. Aeroquip added the capacity to manufacture its own hoses with the 1963 purchase of Republic Rubber Division of Lee Rubber and Tire Corp. Domestic acquisitions for the decade wrapped up with the additions of Robot Manufacturing Co. in 1964; Kennedy Automatic Products Co. in 1966; and Oil Equipment Manufacturing Company in 1969. Aeroquip created two foreign affiliates, a joint venture in Mexico and a Brazilian subsidiary in 1965.

Merger with Libbey-Owens-Ford: 1968 and After

Aeroquip's multi-decade string of acquisitions helped it break the $100 million sales threshold in 1966. By 1968, the company had 4,480 employees, sales of $123.4 million, over $4.4 million profits, and a presence in six countries. But President Hurst foresaw an even bigger future for Aeroquip and began to seek affiliation with a larger company that could provide his firm with sufficient financial backing to continue its global expansion. When negotiations with the first candidate, Westinghouse, failed, Hurst successfully merged Aeroquip with the Libbey-Owens-Ford Glass Company (LOF) in 1968 through an exchange of the two companies' shares. The new parent provided Aeroquip with the funding it needed to continue to increase manufacturing capacity, penetrate new markets, and create new products. Don T. McKone, son of founding president Don Townsend McKone, succeeded Hurst as president in 1968, when Hurst briefly assumed the titles of chairman and CEO. The new president had started his career at Aeroquip in 1949, working his way through the ranks at the Van Wert and Los Angeles plants before becoming an executive in 1961.

Overseas expansion via acquisition and internal growth was emphasized during the 1970s. Aeroquip acquired its ''largest and oldest licensee,'' Britain's Super Oil Seals & Gaskets Ltd., and merged it with the concurrently purchased Yates-Barco Ltd. to form Aeroquip (U.K.) Ltd. in 1970. The company established a strong presence in France, acquiring one company and creating two others by 1978. By the end of the decade, Aeroquip also had a presence in Sweden, Japan, Belgium, Spain and Italy.

Aeroquip pursued domestic as well as overseas expansion during the 1970s. In 1974, the company acquired the Gustin-Bacon Group, a manufacturer of pipe joints, from Certain-teed Products Corporation and made it a division. Aeroquip created the Aerospace division one year later. Contrary to its rather restrictive name, this segment of the company made components for race cars and military helicopters, for example. Before the decade was out, Aeroquip added the Tomkins-Johnson Company, a manufacturer of industrial cylinders, in Jackson, Michigan. By 1978, Aeroquip's sales exceeded $340.8 million.

The company carried on its tradition of promotion from within in the 1970s and 1980s. In 1976, Frederick Schwier succeeded Don McKone to become the company's fourth president. Schwier had joined the company in 1951 and advanced through the sales department. When Schwier was promoted to president and chief operating officer of LOF in 1980, Harry A. Bancroft assumed Aeroquip's top spot. Trained as an engineer, Bancroft was already a 30 year veteran at the company by the time he was promoted to its presidency. Aeroquip continued to expand its global manufacturing and distribution network throughout the 1980s, but the most significant event of the decade concerned its corporate structure.

By the mid-1980s, LOF's diversifications into fluid power and plastics them Aeroquip had grown to exceed annual glass sales. The parent company sold its historic name and glassmaking operations to Britain's largest glassmaker, Pilkington Brothers PLC, in 1986. TRINOVA was formed through the amalgamation of the businesses that remained: Aeroquip, Vickers (another fluid power firm acquired by LOF in 1984), and Sterling Plastics Inc. (acquired by LOF in 1985). According to a 1990 company history, ''the TRINOVA name was counted by combining 'tri' (meaning three) with 'nova' (a bright new star).''

G. William Moody, who succeeded Harry Bancroft as Aeroquip's president in 1985, guided the company through this period of transition. After having logged over two decades with the company, Moody's presidency was rather brief but undoubtedly eventful: he retired at the end of 1988. With more than 25 years' experience at Aeroquip, Howard M. Selland was promoted to the company's leading role in 1989 and oversaw what a corporate profile described as ''the most extensive reorganization in the company's history'': the 1989 merger of Aeroquip and its ''sister TRINOVA company,'' Sterling Engineered Products. The union added plastic molding capacity to Aeroquip's core hydraulic components and systems. The rationalization of operations that followed brought a flurry of corporate divestments in an effort to "streamline operations and blend core competencies.''

While parent company TRINOVA no longer breaks out Aeroquip's annual sales and profits, instead delineating sales by market category, Aeroquip appeared to contribute over half the business's turnover in the early 1990s. TRINOVA struggled in the early 1990s, recording multimillion-dollar net losses in 1992 and 1994, but it appeared to have recovered by 1995, recording a $94.9 million profit on $1.88 billion in sales. The parent expected new product development, strategic alliances, and the continuous pursuit of efficiency to continue this positive trend.

For its part, Aeroquip launched a unique sales concept in 1995, opening an industrial retail store in Toledo, Ohio. Open 24 hours a day, the shop caters to the construction, transportation and agricultural markets. The company expected its distributors to launch 140 such outlets in 1996. Under the continuing guidance of President Howard Selland, Aeroquip hoped to drive continuous growth through innovation. 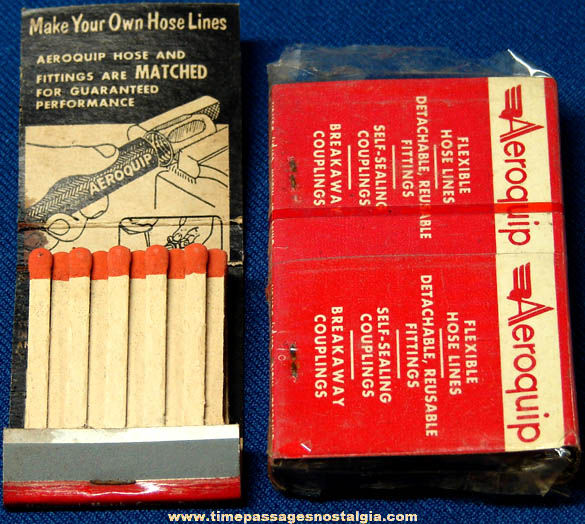