As President, Coolidge's reputation as a quiet man continued. ''The words of a President have an enormous weight,'' he would later write, ''and ought not to be used indiscriminately.'' Coolidge was not unaware of his stiff reputation; indeed, he cultivated it. ''I think the American people want a solemn ass as a President,'' he once told Ethel Barrymore, ''and I think I'll go along with them.''

Presidency 1923-1929
Succession to the Presidency
On August 2, 1923, President Harding died while on a speaking tour in California. Vice President Coolidge was in Vermont at the time, visiting at the family home (still without electricity or telephone) when he got word of Harding's death. Coolidge dressed, said a prayer, and came downstairs to greet the reporters who had assembled. His father, a notary public, administered the oath of office in the family's parlor by the light of a kerosene lamp at 2:47 a.m. on August 3, 1923; Coolidge was re-sworn by Justice A. A. Hoehling of the Supreme Court of the District of Columbia upon his return to Washington.

Finishing Harding's Term
The nation did not know what to make of its new President; indeed, many had expected Coolidge to be replaced on the ballot in 1924. Coolidge had not stood out in the Harding administration, as much of the focus was on the scandals that had begun to emerge by 1923, most notoriously the Teapot Dome scandal. He chose C. Bascom Slemp, a Virginia Congressman and experienced federal politician, as his secretary (a position equivalent to the modern White House Chief of Staff). Although many of Harding's cabinet appointees were scandal tarred, Coolidge announced that he would not demand any of their resignations, believing that since the people had elected Harding, he should carry on Harding's presidency, at least until the next election.

He addressed Congress when they reconvened on December 6, 1923, giving a speech that echoed many of Harding's themes, including immigration restriction and the need for the government to arbitrate the coal strikes then ongoing in Pennsylvania. The Washington Naval Treaty was proclaimed just one month into Coolidge's term, and generally well received in the country. In May 1924, the World War I Veterans' Bonus Bill was passed over his veto. Coolidge signed the Immigration Act later that year, though he appended a signing statement expressing his unhappiness with the bill's specific exclusion of Japanese immigrants. Just before the Republican Convention began, Coolidge signed into law the Revenue Act of 1924, which decreased personal income tax rates while increasing the estate tax, and creating a gift tax to reinforce the transfer tax system. 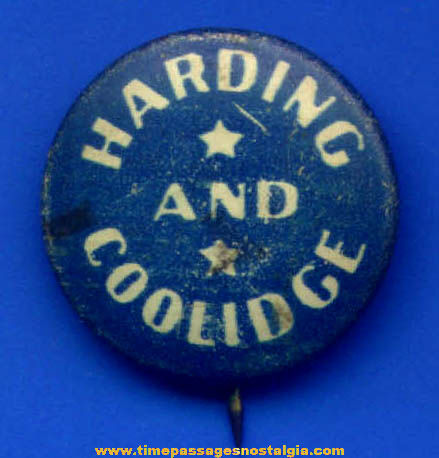