''BLAINE, James Gillespie, a Representative and a Senator from Maine; born in West Brownsville, Washington County, Pa., January 31, 1830; was graduated from Washington College, Washington, Pa., in 1847; taught at the Western Military Institute, Blue Lick Springs, Ky.; returned to Pennsylvania; studied law; taught at the Pennsylvania Institution for the Blind in Philadelphia 1852-1854; moved in 1854 to Maine, where he edited the Portland Advertiser and the Kennebec Journal; member, State house of representatives 1859-1862, serving the last two years as speaker; elected as a Republican to the Thirty-eighth and to the six succeeding Congresses and served from March 4, 1863, to July 10, 1876, when he resigned; Speaker of the House of Representatives (Forty-first through Forty-third Congresses); chairman, Committee on Rules (Forty-third through Forty-fifth Congresses); unsuccessful candidate for nomination for President on the Republican ticket in 1876 and 1880; appointed and subsequently elected as a Republican to the United States Senate to fill the vacancy caused by the resignation of Lot M. Morrill; reelected and served from July 10, 1876, to March 5, 1881, when he resigned to become Secretary of State; chairman, Committee on Civil Service and Retrenchment (Forty-fifth Congress), Committee on Rules (Forty-fifth Congress); Secretary of State in the Cabinets of Presidents James Garfield and Chester Arthur from March 5 to December 12, 1881; unsuccessful Republican candidate for President of the United States in 1884; Secretary of State in the Cabinet of President Benjamin Harrison 1889-1892, when he resigned; aided in organizing and the first president of the Pan American Congress; died in Washington, D.C., January 27, 1893; interment in Oak Hill Cemetery; reinterment at the request of the State of Maine in the Blaine Memorial Park, Augusta, Maine, in June 1920.Ê -Ê Biographical Data courtesy of the Biographical Directory of the United States Congress.'' 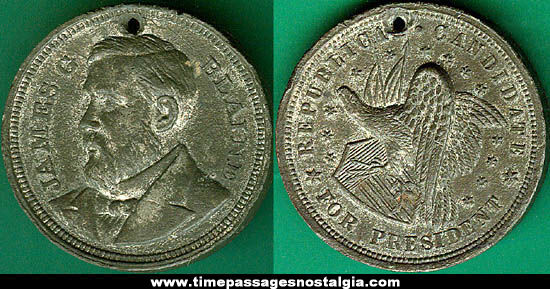