The U.S.S. Crevalle (SS/AGSS-291), a Balao class submarine, was a ship of the United States Navy named for the crevalle, the yellow mackerel, a food fish, found on both coasts of tropical America, and in the Atlantic as far north as Cape Cod. ''Crevalle'' is pronounced ''cre-VAL-ley'', with the accent on the second syllable. Crevalle was launched 22 February 1943 by Portsmouth Navy Yard in Kittery, Maine; sponsored by Mrs. C. W. Fisher; and commissioned 24 June 1943, Lieutenant Commander H. G. Munson in command.

First and second war patrols, October 1943 - February 1944
Crevalle arrived at Brisbane, Australia, from New London 11 October 1943, and after replenishing there and at Darwin, put to sea 27 October on her first war patrol, in the Sulu and South China Seas. On 15 November she sank a passenger cargo ship of almost 7,000 tons, and made two more attacks on merchant ships before returning to Fremantle, Australia, for refit 7 December.

Her second war patrol, in the South China Sea from 30 December 1943 to 15 February 1944, found her attacking a submerged Japanese submarine on 7 January, only to know the frustration of premature torpedo explosion. In a hazardous special mission, she laid mines off Saigon on 14 and 15 January, and on 26 January sent a Japanese freighter to the bottom. A surface action with a small patrol boat on 11 February sank the enemy craft, and on 15 February, Crevalle fired at several targets in a large convoy, prudently clearing the area before the results of her firing could be verified.

Third and fourth war patrols, April - August 1944
On 16 March 1944 while refitting at Fremantle, Commander F. D. Walker assumed command, and on 4 April, Crevalle sailed for the South China Sea. She sank a freighter 25 April, and an oiler 6 May, and on 11 May surfaced off Negros Island in the Philippines on another daring special mission. She rescued 40 refugees here, including 28 women and children, and 4 men who had survived the Bataan Death March and made their escape. She also took off the family of an American missionary, who having seen his family to safety, returned ashore at the last minute to continue his ministry among the guerrillas. Along with her passengers, Crevalle recovered a group of important documents (the Japanese ''Z plan''), and transferred all she could spare in the way of supplies to the guerrillas. In May 1944, while returning with her passengers to Darwin, Crevalle was spotted by a Japanese bomber on the third day of the journey. With four working torpedoes Capt. Walker maneuvered to attack, but was severely depth charged by a Japanese convoy, a special ordeal for the passengers. The periscopes and radar were knocked out. They were landed safely at Darwin 19 May, 8 days after leaving the Philippines. Crevalle sailed on to refit at Fremantle.

For her fourth war patrol, Crevalle returned to the South China Sea, as well as cruising off the northern Philippines, between 21 June and 9 August 1944. In company with three other submarines for most of this patrol, Crevalle joined in a 30-hour pursuit and attack on a convoy on 25 July and 26 July, sinking one freighter, and polishing off another already crippled by one of her groups. Two days later, Crevalle inflicted heavy damage on another freighter.

Fifth war patrol, September 1944
Refitted once more at Fremantle, Crevalle put to sea on her fifth war patrol 1 September 1944. Ten days later, she surfaced after a routine trim dive. A lookout, Bill Fritchen, was first through the hatch followed closely by the Officer of the Deck, Lt. Howard James Blind. Fifteen seconds later, the boat took a sharp down angle, and submerged with the upper and lower conning tower hatches open, washing the lookout overboard. The flow of water through the upper hatch, which was latched opened, prevented anyone in the conning tower from closing it. The lower hatch to the control was blocked by a piece of floor matting.

At 150 feet (50 m) the hatch was seen to close and lock. The ship continued diving to 190 feet (60 m) at an angle that reached 42 degrees down. With communications out, an alert machinist's mate, Robert L. Yeager, saved the submarine by backing full without orders. The pump room, control room and conning tower flooded completely, and all electrical equipment was inoperative. Yeager received the Silver Star for his action. Bringing the submarine under control, her men surfaced and were able to recover the lookout, but not Lt. Blind. It was later determined that the stern planes had jammed in the full dive position causing the sudden dive. With Fritchen having been washed off the bridge when the submarine dived, it was concluded that Blind had hung on the ship, and sacrificed his life in unlatching the upper conning tower hatch, saving the submarine. Blind posthumously received the Navy Cross for his action. Blind, a graduate of Rensselaer Polytechnic Institute, had married a woman in Australia only two weeks before his death. Crevalle made her way back to Fremantle 22 September, and sailed on to an overhaul at Mare Island Naval Shipyard, followed by training at Pearl Harbor.

Sixth and seventh war patrol, March - July 1945
The submarine put to sea on her sixth war patrol from Pearl Harbor 13 March 1945. Cruising in the East China Sea, she took up a lifeguard station during air strikes preparing for the Okinawa invasion, then on 23 April - 25 April, made a hazardous search for a minefield believed to be located near the southern entrance to the Tsushima Straits.

She returned to Guam to refit from 3 May to 27 May, then sailed for her seventh war patrol in the northeast section of the Sea of Japan. She sank a freighter a day on 9 June, 10 June, and 11 June, and on 22 June inflicted heavy damage on an escort ship. Returning to Pearl Harbor 5 July, she got underway once more on 11 August, but received word of the end of hostilities before entering her assigned patrol area. She called at Guam and Saipan before returning to Pearl Harbor 10 September, then on 13 September, cleared for New York City, arriving 5 October.

Post war service
After a repair period, Crevalle reported at New London, her assigned home port, 27 March 1946. She cruised to the Canal Zone and the Virgin Islands before being placed out of commission in reserve at New London 20 July 1946. Recommissioned 6 September 1951, Crevalle took part in training, exercises, and fleet operations along the East Coast and in the Caribbean until 19 August 1955, when she was again placed out of commission in reserve at New London. Again recommissioned 11 April 1957, she resumed her East Coast and Caribbean operations through 1960. Crevalle was reclassified an Auxiliary Research Submarine AGSS-291 in 1960. She was decommissioned, 9 March 1962. Crevalle was struck from the Naval Register, 15 April 1968, and sold for scrap, 17 March 1971.

All of Crevalle's war patrols, save the interrupted fifth, were designated as ''successful'', and the first four won her the Navy Unit Commendation for distinguished performance of duty as well as four battle stars. Her last two war patrols were recognized with one battle star awarded for the Okinawa operation. She is credited with having sunk a total of 51,814 tons of shipping, and shared in the credit for an additional 8,666 tons. 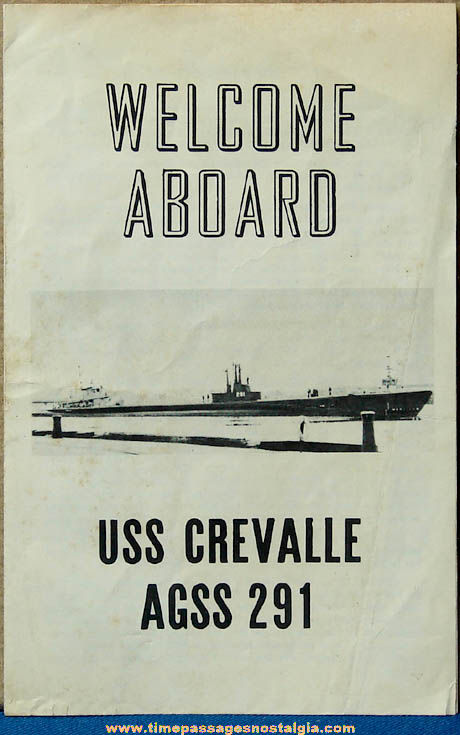