The gold button measures 11/16'' x 7/8''. It is in mint condition as pictured. Below here is a little bit of the History of the Portsmouth Naval Shipyard:

On June 12, 2000, the Portsmouth Naval Shipyard celebrates its official Bicentennial. Although not formally established until 1800 as a U.S. Navy Yard on New Hampshire's seacoast, Portsmouth has had a reputation for superior shipbuilding for more than 350 years. Captain John Paul Jones himself personally assisted in building the ships he would later command. Many historic ships were built and refurbished for the Navy at Portsmouth, including the USS Raleigh depicted on the New Hampshire State Seal, and the U.S.S. Constitution.

Naval ship construction in America had its beginning in 1690 on the shores of the Pisctaqua River, which serves as a natural boundary between Maine and New Hampshire. Though only a few Royal Navy ships were constructed here, colonial building ways were soon controlled by American sympathizers during the revolution, resulting in the construction of at least three U.S. warships. In 1799 chief naval constructor Humphries recommended to the Secretary of the Navy that Portsmouth Harbor be the site of a government owned and operated shipyard, the swift waters, upriver islands, a ready source of materials and skilled labor being all the reasons he would need to convince Congress to allocate $5,500 for the purchase of the Fernalds Island in Portsmouth Harbor on June 12, 1800.

Through all the major national conflicts, the Portsmouth Naval Shipyard (PNS) was called upon to design and construct warships from the War of 1812 to the Vietnam War. ''Sails to Atoms'' is the shipyard's motto, reflecting its building of the line Washington, launched in 1815, to the fast-attack nuclear submarine USS Sand Lance, launched in 1969. The Shipyard currently has a lead role in the overhaul of nuclear-powered submarines. Through several centuries, the PNS has distinguished itself as a leader in naval design and construction.

The project consists of a one page abstract, a book entitled Portsmouth Kittery Naval Shipyard in Old Photographs , a chronology facts relative to the location of the Portsmouth Naval Shipyard, and a copy of a Motion by the State of New Hampshire before the U.S. Supreme Court in March 1999 over the related border dispute with Maine. 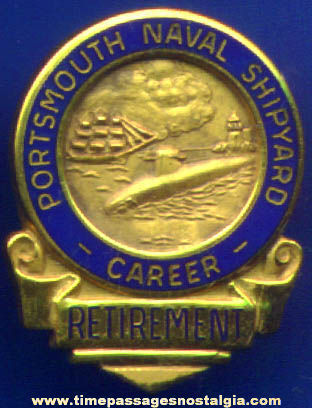