History - World War II
Originally a B-24 Liberator bomber squadron in the Pacific Theater of World War II, assigned directly to Headquarters, Thirteenth Air Force. The squadron was equipped with RADAR equipped Liberators (unofficially designated as the SB-24 ''Snooper'') with an extra crew member to operate the SCR-717 10Êcm RADAR; the SCR-729 Aircraft RADAR beacon and a number of other specialized devices. The mission of the squadron was for low level, anti-shipping strikes under the cover of darkness. They had this capability because the radar sighting devices permitted operation of the bomb release mechanism irrespective of visual sighting of the target.

The 868th Bombardment Squadron flew its special radar equipped SB-24 Snoopers nightly from 8 to 27 August 1943 on 1900 mile round trips from Los Negros Island to bomb Palau. By 23 August, Wadke Island was operational and the 5th and 307th Bombardment Groups started day light B-24 missions over Palau. Between 25 August and 4 September, nine missions dropped over 600 tons of bombs. Major damage occurred throughout Palau, but at a cost: seven B-24Õs did not return. An enemy fighter shot down one and AAA shot down at least three others over Babeldaob and adjacent Koror; these four were reported to have crashed within sight of the islands. Parachutes from two B-24Õs were seen by wingmen and at least two crewmembers were later recorded as captured. The remaining B-24Õs fell into deep water outside the Palau Islands.

By March 1944, the Japanese ceased sending shipping convoys to the Solomons area and the 868th Bombardment Squadron was out of a job and were subsequently used as pathfinders for high altitude bombers. Special missions were flown against land targets at night and one of the intentions was to prevent the Japanese from sleeping just as the Japanese ''Washing Machine Charlie'' did against the United States Marines on Guadalcanal.

They participated in the destruction of Truk in April 1944. In August 1944 they conducted nightly 1100 mile two plane attacks from Los Negroes to the Palaus in the Dutch East Indies. Ten B-24 ''Snoopers'' of the 868th Bomb Squadron struck Soerabaja, Java, on 7 May, flying a total distance of 2660 statute miles, in 17 hours and 40 minutes, one of the longest flights ever made by B-24 aircraft in combat formation. Seven ''Snoopers'' shattered their own record soon after by flying a strike against Batavia, Java, 3 June 1945; they flew in formation from Palawan to Batavia and return to cover a distance of 3000 statute miles, in 18 hours and 40 minutes. A measure of success was achieved in both strikes against Java; in each case, the Japanese were taken by surprise and shipping in the harbors was left either sunk or damaged.

Cold War
During the Cold War, became a MGM-1 Matador Tactical Missile squadron. Formed at Orlando AFB, Florida, as part of Ninth Air Force, Tactical Air Command in 1955. Trained in Florida until deployed to Pacific Air Forces Thirteenth Air Force. Lead elements of the squadron began deploying to Tainan Air Base, Taiwan, in May 1957 with conventional warheads on missiles, main squadron in November when W-5 warheads were available, and the official reassignment to PACAF on 1 February 1958. Upon arrival at Tainan, squadron was supported by the creation of Detachment 2 of the 6200th Air Base Wing, which was also known as the ''Tainan Air Base Group''. The support group went through renumbering almost as often as the missile squadrons and on August 18, 1958 the unitÕs name was changed to the 6214th Air Base Group. The 17th TMS was re-designated as the 868th Tactical Missile Squadron in June 1958. The squadron was assigned to Taiwan as part of their first Quick Strike commitment, and stood vigilant alert duty assigned to the Taiwan Straits until inactivated in March 1962.

During the 1980s, became a training squadron for the BGM-109 Tomahawk Ground Launched Cruise Missile (GLCM). During preparations to fire drones into Iraqi air defences in 1990 - 1991, the group was utilised to assist in the launch of BGM-74s and Navy ADM-141 TALDs from King Khalid and Ar'ar into Iraq. Personnel under the direction of Colonel Douglas Livingston were despatched to Saudi Arabia, as the group represented the little Air Force expertise that was available on ground-launched missiles. (Gordon and Trainor, The Generals' War, 1995, 113 - 114.). Inactivated as a result of the INF Treaty in 1990. 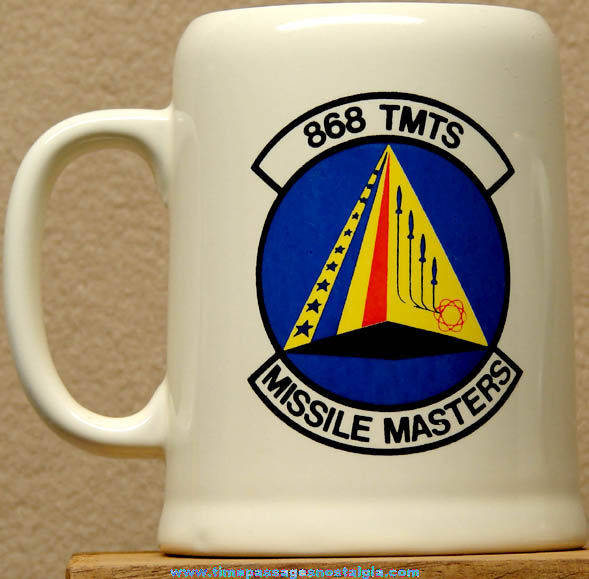