The U.S.S. Hanson (DD/DDR-832) was a Gearing class destroyer of the United States Navy, named for First Lieutenant Robert M. Hanson (1920 - 1944), a United States Marine Corps quintuple ace who was awarded the Medal of Honor posthumously. The Hanson was launched on 11 March 1945 by the Bath Iron Works Corp., Bath, Maine; sponsored by Mrs. Harry A. Hanson, mother of Lt. Hanson; and commissioned on 11 May 1945, Commander John C. Parham in command.

After shakedown in the Caribbean and conversion to a picket destroyer at Boston Navy Yard, Hanson sailed for the Pacific on 7 November 1945. She spent most of the following year operating in support of occupation forces in Japan, with a September period of fleet maneuvers off the China coast. Reporting to the Atlantic Fleet at Norfolk, Virginia on 6 February 1947, Hanson trained along the East Coast until sailing in late January 1948 for her first tour of duty with the 6th Fleet in the Mediterranean. She was designated DDR-832 (radar picket destroyer) on 8 March 1949. During her second deployment to the Mediterranean in the summer of 1949 Hanson took part in two of the most important steps toward peace taken in that tension wracked region. As station ship to the United Nations General Assembly at the Isle of Rhodes, she was the only American warship present as Greece received control of the long contested Dodecanese Islands. On her next important duty Hanson carried United Nations mediator Dr. Ralph Bunche, later awarded the Nobel Peace Prize, to Beirut, Lebanon, for peace negotiations on Israel.

World crisis shifted from Europe and the Mediterranean to the East in 1950, and Hanson joined the Pacific Fleet at Pearl Harbor on 12 July to prepare for her role against Communist aggression in Korea. Her first duty off the war torn country saw Hanson participating in the amphibious operations at Inchon on 15 September 1950 as well as providing fire cover for the successful evacuation of Hngnam and Wonsan just before Christmas that year. Hanson's second combat cruise to Korea, September 1951 to May 1952, took her along the east coast as a member of the fleet bombarding strategic shore targets in support of ground troops where her accurate fire was most effective. In December she also participated in the important Formosa Patrol and visited Hong Kong. After a respite at San Diego, Hanson returned to the Korean bombline in December 1952 for task force operations, screening the fast carriers as they launched their jets against enemy supply lines and positions. The battle hardened destroyer also participated in shore bombardment, search and rescue (SAR) operations, and Formosa patrol before returning to the United States on 20 July 1953, shortly before the end of open conflict in Korea.

Subsequent years found Hanson making annual six month deployments with the 7th Fleet to strengthen American defenses in the Pacific and to prove American determination to keep the peace to possible aggressors. In addition to patrol, major portions of Hanson's Pacific cruises were devoted to tactical maneuvers and battle exercises with United States and allied ships as well as intensive antisubmarine hunter killer training. Hong Kong, Formosa, Japan, the Philippines, Korea, and even Australia provided familiar ports of call for the destroyer on these cruises. Hanson was patrolling the Straits of Formosa virtually within sight of Communist mainland China in the fall of 1958 as shelling of the offshore islands of Quemoy and Matsu precipitated a major international crisis. In the spring of 1962 and again in 1963 Hanson took part in the annual Australian celebration of the Battle of the Coral Sea, World War II's first carrier naval engagement in the Pacific.

When not deployed to the western Pacific, Hanson trained out of her home port, San Diego. Much of this training was centered on Hanson's role as a radar picket destroyer, designed to provide early warning of approaching enemy air, surface, or submarine forces. On 1 April 1964 she was redesignated DD-832 and entered the Mare Island Naval Shipyard to undergo a Fleet Rehabilitation and Modernization (FRAM) conversion designed to prolong her effective life as a fighting ship for many years.

Conversion completed on 6 December 1964, Hanson rejoined the Pacific Fleet early in 1965 as a unit of Destroyer Squadron 11 (DesRon 11), with sister ship the Dennis J. Buckley (DD-808), which was also a recent converted from DDR configuration. She operated along the West Coast until heading for the Far East early in the summer to join the fight against Communist aggression in Southeast Asia. In July she shelled enemy targets ashore and, but for brief respites, she patrolled and fought in troubled Vietnamese waters until late in the autumn.

Returning to San Diego in December, she operated along the coast of California and Mexico until getting under way for the Orient on 17 July 1966. She steamed via Hawaii, Midway, Guam, and Subic Bay for Vietnam and anchored in the Saigon River on 13 September. But for short visits to Hong Kong, Formosa, and the Philippines, Hanson operated in the fighting zone until relieved on 6 January 1967. During the deployment, her 5 inch guns fired over 9,000 rounds at Communist targets, mostly in direct support of ground forces. She also performed plane guard duty, patrolled close ashore to stop infiltration of supplies and men from the north, and refueled helicopters. Back at San Diego on 11 February 1967, Hanson operated along the West Coast preparing for her next WestPac deployment. During the period, six months were spent in Long Beach Naval Shipyard undergoing repairs and overhaul.

Hanson's third deployment to Vietnam covered March through September, 1968. Notably, deployment was moved up in order to steam quickly to the Sea of Japan, where North Korean naval forces had recently (23 January 1968) intercepted and captured the U.S.S. Pueblo in international waters off the coast of North Korea. Hanson's appearance in the area did not elicit any material response from the Communists, and after several days, the ship sailed south to join the rest of the 7th Fleet off Vietnam in the South China Sea. Hanson returned to San Diego in the following September.

Hanson was stricken from the Naval Vessel Register on 31 March 1973. 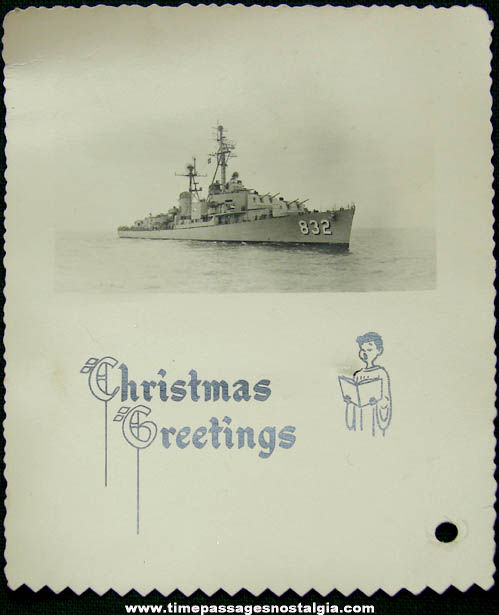