In 1958, Blandy bore the American Unknown Soldier of World War II's European Theater from Naples to a rendezvous off the Virginia Capes with Boston (CAG-1), which bore the Unknowns of the Pacific Theater and the Korean War, and Canberra (CAG-2). After the selection of the Unknown of World War II was made on board Canberra, the selected casket and the Korean Unknown were transferred to Blandy for transportation to Washington, D.C. Arriving at the U.S. Naval Gun Factory on 28 May, both caskets laid in state in the Capitol Rotunda until 30 May, after which they were interred in the Tomb of the Unknowns in Arlington National Cemetery.

In 1961, Blandy won the Marjorie Sterrett Battleship Fund Award for the Atlantic Fleet.

The ship was decommissioned on 5 November 1982 and struck from the Navy List on 27 July 1990. She was sold for scrap to the Fore River Shipyard and Iron Works on 11 December 1992. When the shipyard went bankrupt in 1993, she was resold to N. R. Acquisition Incorporated of New York City by the Massachusetts Bankruptcy Court and scrapped by Wilmington Resources of Wilmington in North Carolina in 1996. 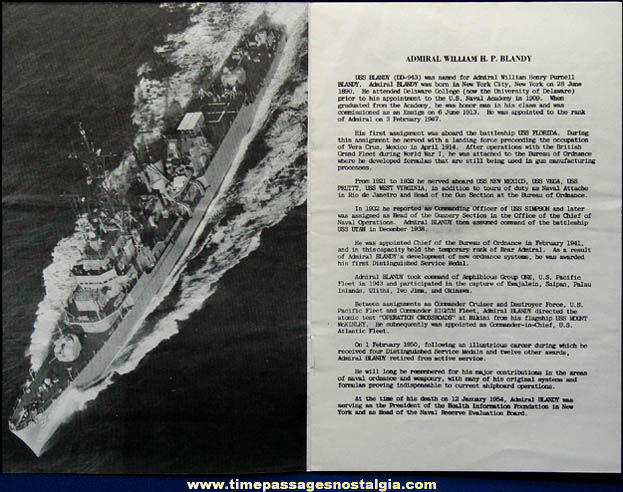