The home units were introduced in 1986 as an Entertech product, at the same time as the Lazer Tag brand units of competitor Worlds of Wonder. Both companies were very successful in the Christmas shopping season of 1986. By 1987, 70 franchise licenses had been sold and 45 arenas were operating. In 1989, lack of financing and loss of franchise revenue forced the corporation to sell off its assets and cease operations. In 2007, a new Photon center was constructed in Broken Arrow, Oklahoma. It opened on July 1, 2008, but on September 9, 2008, after less than 9 weeks, lack of business revenue forced the center to cease operations. In 2014, a former Photon operator has begun an IndieGoGo campaign to bring Photon back for a reunion party.

Technology and gameplay[edit]
While primitive compared to technology today, entailing wearing 15 pounds of battery packs and equipment, Photon was one of the first video game like experiences that one could play in the real world. The arenas featured multiple levels, catwalks, mazes, and an observation deck where people not participating could cheer on their friends in the game, or get target practice by shooting players from special token operated emplacements. (Shots from observation deck guns did not affect the game in any way at most arenas.) This contrasted sharply with competing laser tag centers, whose fields were small, single level, composed of clusters of free standing painted cardboard barriers, and typically contained no observation area of any sort. Also, in Photon, players were allowed to roam at will through the entire playing field rather than be restricted to team specific zones.

Photon players joined either a red or green team (solo games were not an option), and played in an arena. Dramatic music by Ken Caillat, strobe effects, and smoke machines were used in the arena during games to enhance play. Players gained points for shooting other players and for shooting the enemy teams base. Players lost points for being shot (zapped in game terminology) or by shooting teammates. (A player zapping a teammate would lose a massive amount of score and be automatically zapped himself.) One feature of the game was that no player could be zapped more than three consecutive times by the same player. This forced players to vary, or clear, their targets before being able to score points on the same player again. When zapped, a players weapon would be inert for five seconds and then reactivate automatically, with no need to charge up at a base as was required in the games of competitors. At some locations, the amount of time a players weapon would be inert would vary based on score. A player with a high score would have an inert weapon for up to 10 seconds. For safety reasons, referees would try to enforce a rule that you must be at least 5 feet away from an opponent that you are shooting. Photon used an infrared gun and receiver system, which did not actually fire visible lasers. As technology improved and more arenas opened, IR guns using a visible laser and a built in gun site began to appear in gameplay.

Customers joined by purchasing a photo ID badge (ranging in price at different areas from $10.00 - $35.00), and then paid a per game fee (or a blanket fee on special nights that allowed unlimited play). Games lasted six minutes, with cues from the soundtrack that regular players could utilize for more strategic games. During game play, monitors on the observation deck and in the waiting areas showed scoring, with players listed under self chosen handles. Most players referred to each other by their handles, which became its own identity, instead of their real names. League players in retail games would often tag their handles with their team names, like multiplayers do today, to distinguish themselves from the noobs or new players.

In many franchises, Photon leagues were formed, with rules somewhat more complex than in general gameplay, and tournament games were held regularly. Tactics and strategy were a big part of league competition and rules governing the covering of IR sensors were often implemented for players that would obscure their ability to get hit by pressing against walls or wearing their helmet high on the head to avoid being zapped by straight on shots. This included cocking, which was described as cocking your head back to obscure the helmet, holding your gun slightly down between shooting to avoid direct gun shots, while covering your breastplate with your hand. 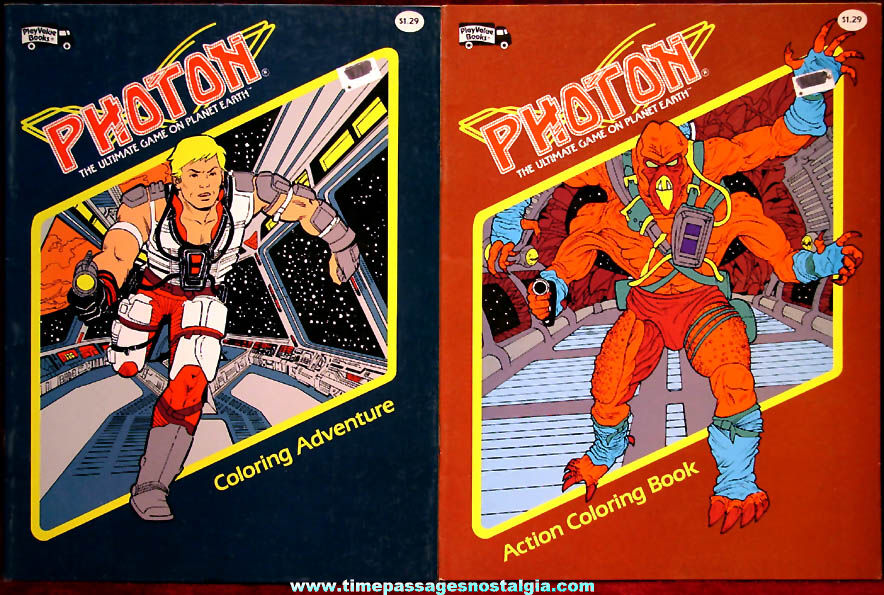