George Washington's keel was laid down at Electric Boat Division of General Dynamics, Groton, Connecticut on 1 November 1957. The first of her class, she was launched on 9 June 1959 sponsored by Mrs. Robert B. Anderson, and commissioned on 30 December 1959 as SSBN-598 with Commander James B. Osborn in command of the Blue crew and Commander John L. From, Jr. in command of the Gold crew. George Washington was originally laid down as the attack submarine USS Scorpion (SSN-589). During construction, she was lengthened by the insertion of a 130 feet (40 m) long ballistic missile section and renamed George Washington; another submarine under construction at the time received the original name and hull number. Inside George Washington's forward escape hatch, a plaque remained bearing her original name. Because the ballistic missile compartment design of George Washington would be reused in later ship classes, the section inserted into George Washington was designed with a deeper test depth rating than the rest of the submarine.

George Washington left Groton, Connecticut on 28 June 1960 for Cape Canaveral, Florida, where she loaded two Polaris missiles. Standing out into the Atlantic Missile Test Range with Rear Admiral William Raborn, head of the Polaris submarine development program, on board as an observer, she successfully conducted the first Polaris missile launch from a submerged submarine on 20 July 1960. At 12:39, George Washington's commanding officer sent President Dwight Eisenhower the message: ''POLARIS - FROM OUT OF THE DEEP TO TARGET. PERFECT.'' Less than two hours later a second missile from the submarine also struck the impact area 1,100Ênmi (1,300 mi; 2,000 km) downrange.

George Washington then embarked her Gold crew, and on 30 July 1960 she launched two more missiles while submerged. Shakedown for the Gold crew ended at Groton on 30 August and the boat got underway from that port on 28 October for Naval Weapons Station Charleston, to load her full complement of 16ÊPolaris missiles. There she was awarded the Navy Unit Commendation, after which her Blue crew took over and embarked on her first deterrent patrol.

The submarine completed her first patrol after 66Êdays of submerged running on 21 January 1961, and put in at Naval Submarine Base New London at New London, Connecticut. The Gold crew took over and departed on her next patrol on 14 February 1961. After the patrol, she entered Holy Loch, Scotland, on 25 April 1961. In 1964, four years after her initial departure from Groton, George Washington put in to refuel, having cruised some 100,000 nmi (120,000 mi; 190,000 km). George Washington shifted to the United States Pacific Fleet and a new home port at Pearl Harbor, Hawaii.

On 9 April 1981, George Washington surfaced underneath the 2,350 long tons (2,390 t) Japanese commercial cargo ship Nissho Maru in the East China Sea about 110 nmi (130 mi; 200 km) south-southwest of Sasebo, Japan. Nissho Maru sank in about 15Êminutes. Two Japanese crewmen were lost; 13 were rescued. The submarine suffered minor damage to her sail. The accident strained U.S. Japanese relations a month before a meeting between Japanese Prime Minister Zenko Suzuki and President of the United States Ronald Reagan. Japan criticized the U.S. for taking more than 24Êhours to notify Japanese authorities, and demanded to know what the boat was doing surfacing only about 20 nmi (23 mi; 37 km) outside Japan's territorial waters. Neither the submarine nor an American Lockheed P-3 Orion maritime patrol aircraft circling overhead made any attempt to rescue the Japanese crew. The U.S. Navy initially stated that George Washington executed a crash dive during the collision, and then immediately surfaced, but could not see the Japanese ship due to fog and rain. A preliminary report released a few days later stated the submarine and aircraft crews both had detected Nissho Maru nearby, but neither the submarine nor the aircraft realized Nissho Maru was in distress.

On 11 April, President Reagan and other U.S. officials formally expressed regret over the accident, made offers of compensation, and reassured the Japanese there was no cause for worry about radioactive contamination. As is its standard policy, the U.S. Government refused to reveal what the submarine was doing close to Japan, or whether she was armed with nuclear missiles. (The standard response all modern American submariners are taught is neither to confirm nor deny the presence of nuclear weapons aboard.) The Navy accepted responsibility for the incident, and relieved and reprimanded the George Washington's commanding officer and officer of the deck. On 31 August, the U.S. Navy released its final report, concluding the accident resulted from a set of coincidences, compounded by errors on the part of some members of the submarine crew.

In 1982, George Washington returned to Pearl Harbor from her last missile patrol. In 1983, her missiles were unloaded at Bangor, Washington to comply with the SALT I treaty. George Washington made 55 deterrent patrols in both the Atlantic and Pacific oceans in her 25 year career.

Service as an attack submarine

George Washington continued service as an attack submarine (SSN), returning briefly to Pearl Harbor. In 1983, she departed Pearl Harbor for the last time and transited the Panama Canal back to the Atlantic and to New London.

The U.S.S. George Washington was decommissioned on 24 January 1985, stricken from the Naval Vessel Registry on 30 April 1986, and scheduled for disposal through the Ship Submarine Recycling Program at Puget Sound Naval Shipyard. Recycling of the ship was completed on 30 September 1998.

George Washington's sail was removed prior to disposal and now resides at the Submarine Force Library and Museum at Groton, Connecticut. 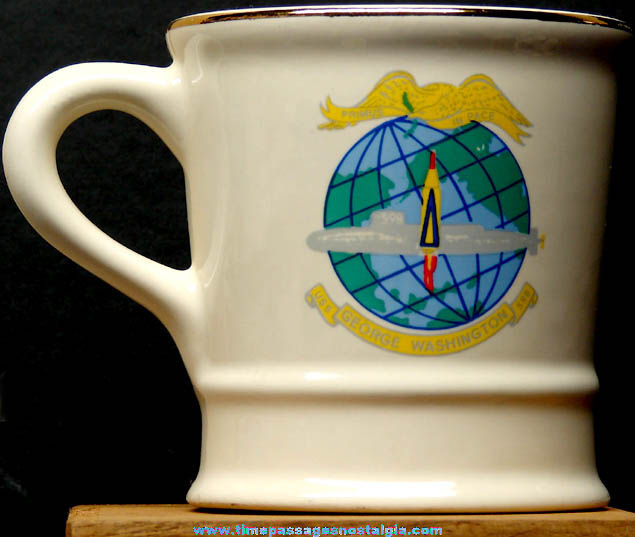